↓ Skip to Main Content
Home › Uncategorized › Capacity Problems: Can the United States Handle Wildlife Trafficking on its Own Soil?

Capacity Problems: Can the United States Handle Wildlife Trafficking on its Own Soil?

In 2011, U.S. federal agents seized 425 pieces of illegal ivory from a store in Philadelphia. The store owner, Victor Gordon, had been buying and selling illegal ivory in the United States for over 10 years. According to the U.S. Fish and Wildlife Service, this kind of story is not uncommon.  For every shipment of illegal wildlife that is detected in the United States, another 9 are estimated to slip by.

Since this incident, however, not much has been done to strengthen anti wildlife trafficking enforcement within the United States. Indeed, the Fish and Wildlife Service has not significantly increased its number of 330 wildlife inspectors in the past 30 years. In contrast, the illegal wildlife trade has grown within the past decade to become an enterprise that nets around $19 billion annually. A significant portion of this figure comes from the poaching and sale of endangered species. Central Africa’s elephant population has declined by 64% in the past decade—with ivory from these kills being trafficked to consumers around the world.  Rhinos in countries such as South Africa have also seen their numbers dwindle. Earlier this month, South African officials announced over 1000 rhinos had been poached in 2014 alone—a record number. The horns of these rhinos are being sold to consumers all over the world. Part of this illegal trade is occurring within the United States itself—and the United States does not seem to have the capacity to handle it. 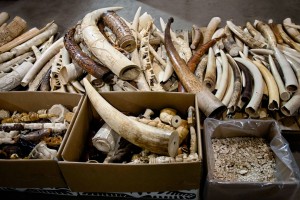 The United States is not the only nation with capacity problems in wildlife enforcement. Countries such as Myanmar, Kenya, and the Democratic Republic of Congo (among many others) lack the capacity to protect wildlife within their borders and prevent trafficking.  Officials from the forestry department in Taungoo, Myanmar, for example, have appealed for assistance to curb the high number of wild elephants being killed in the region. The United States is not facing the same level of capacity troubles as Myanmar, but, as the world superpower, the fact that the United States cannot keep up with domestic wildlife trafficking brings into question international conservation demands on other, less developed, nations.

The U.S. government has responded to growing problem of wildlife trafficking by issuing an executive order to combat it. However, while the order does mention trying to curve domestic demand, the text focuses largely on curbing the international supply of illegal wildlife. According to the order, the United States will strengthen its efforts to help other nations build their capacity to stem poaching and wildlife trafficking. It will do this by encouraging and promoting the development of laws and enforcement in foreign countries regarding the problem.

While laudable, most of the policies outlined in this order will not address U.S. domestic sources of wildlife trafficking. The United States needs to tackle its status as a major transit country for illegal wildlife products if it is serious about combating wildlife trafficking. To address this issue, the United States will have to develop its own capacity to screen and monitor incoming shipments for illegal wildlife–more so than it already has. It will need to devote more resources, take stricter measures, and draw public attention to the issue. Increased capacity, in addition to  stricter measures on domestic wildlife trafficking (such as the increased regulations on ivory that took effect in February 2014), is needed. In a nation where the biggest threats are thought to come from a slow economy and terrorists, the threat of wildlife trafficking is often overlooked and sidelined. However, the threat of species extinction and the political instability poaching creates is real and we must realize that addressing the supply side of wildlife trafficking is only addressing part of the problem.