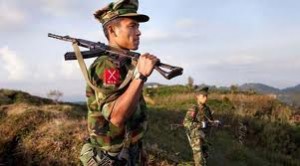 One of these source countries, Myanmar (Burma), faces a particularly difficult future in stemming wildlife trafficking within and across its borders. Myanmar banned most forms of wildlife trafficking under the Convention on International Trade in Endangered Species of Wild Fauna and Flora (CITES) in 1997. However, the official Myanmar government is not the only political and military force in the country. Myanmar possesses over 40 armed groups, many of which lay claim to particular regions of Myanmar. Several of these groups are in direct conflict with the Myanmar Armed Forces (Tatmadaw).

Of the many Myanmar states and areas known for illegal wildlife and timber trafficking, Kachin and Shan state are the most infamous. Unfortunately, these two states are also at the center of the bitterest armed fighting in Myanmar.

Kachin and Shan states are home to the Kachin Independence Army (KIA), Shan State Army (SSA), National Democratic Alliance Army (NDAA), Ta’ang National Liberation Army (TNLA), and the United State Wa Army (USWA) — among many others.  All of these ethnic groups have fought with the Myanmar government within the last 5 years. The KIA and TNLA, in particular, are still in direct conflict with the government. The most recent fighting between the KIA and the Tatmadaw took place on January 14 and 15 in both Shan and Kachin states, causing thousands of refugees to flee.  The KIA has been known authorize the trade of illegal timber into China—a trade that has cost Myanmar around $5.7 billion between 2000 and 2013.

The NDAA, which currently has a ceasefire agreement with the government, controls its own area in Special Region No. 4.  The region’s capital, Mong La, is the most notorious transit spot in Myanmar for illegal wildlife products. Here, animal parts are sold to Chinese consumers for medicinal purposes. In this city, where the Chinese yuan is more often used for tender than the Burmese kyat, visitors can purchase slow lorises, snow leopard parts, bear bile, monkeys, carved ivory, pangolin meat, and glasses of tiger wine.  The rapid increase in the sale of tiger parts in this city has been covered by many news and environmental conservation organizations over the past few months.

For their part, the Myanmar government has tried to stem the flow of illegal wildlife products into China. Earlier this month, around 122 people were arrested for transporting illegal timber in Kachin state. These individuals were carrying documentation that showed that the KIA authorized the transport.   On January 13, government officials seized illegal wildlife parts in Muse, Shan State (a city that has been the site of several clashes between ethnic armed groups and the Tatmadaw over the past year). However, as one Myanmar government official noted, the government can only do so much in areas it does not securely control.

In Myanmar, and in Kachin and Shan states in particular, any attempt by the Myanmar Government to crack down on wildlife trafficking would require cooperation with ethnic armed groups–some of which are known to be hostile to the government. Indeed, several of these groups, including the KIA, use the proceeds from illegal trafficking to fund their armies.

Developing countries that are sources countries of illegal wildlife parts to China, like Myanmar, face a long struggle ahead in attempting to stamp of wildlife trafficking. Eliminating wildlife trafficking is not an overnight endeavor for any country, but for nations with internal conflict such as Myanmar, the process will likely take much longer.

One comment on “Internal Conflict and Wildlife Trafficking: Myanmar”