In a move that demonstrates how real the ongoing poaching crisis is, Kenya burned 15 tons of ivory on World Wildlife Day. 20-25,000 elephants are being illegally killed each year across Africa. Increasingly, governments have attempted to stop poaching by increasing the militarization of their conservation efforts. Many countries employ heavily armed park rangers or even their national armies to defend wildlife with an increasing amount of sophisticated military hardware such as unmanned drones. With terrorist organizations such as al-Shabaab using the illegal ivory trade to help fund their activities, is the militarization of conservation efforts inevitable, or even effective? 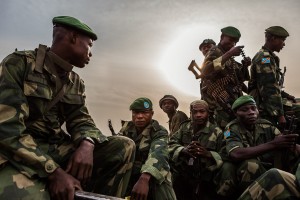 Kathryn Bigelow, director of “Zero Dark Thirty” and “The Hurt Locker,” recently created a short film titled “Last Days”, that looks at the ties terrorist organizations such as al-Shabaab, the Lord’s Resistance Army, and Boko Haram have with poaching activities. While some have criticized the supposed links between poaching and some terrorist organizations, it is clear that the job of defending wildlife against poaching is becoming an ever more dangerous trade. In 2013, 69 park rangers were killed by poachers or militia. The response to increases in such violence has been to increase the amount of military hardware used in anti-poaching efforts. But will this stop poaching?

At this point, there are no clear answers. As of today, the poaching crisis continues unabated despite the efforts of many national militaries such as those in South Africa, Cameroon, and Botswana. There is no data source that allows us to accurately determine how the actions of poachers have changed as more militaries have become involved. Clearly the level of violence has increased in recent years. However, As stated by Peter Knights, executive director of WildAid:

You’re never going to stop [poaching] by just putting new boots on guys in Africa because it’s a [game of] whack-a-mole.

As both sides beef up resources and force in response to the other, the value of rhino horn increases accordingly, giving poachers even more incentive to poach and to fight back using militarized means, resulting in further militarization state-side and more deaths. This suggests that perhaps the only viable solution is to stop end-user demand or perhaps, more controversially, legalize the trade in rhino horn, as suggested by several South African National Parks officials and rangers.

Other academics are far more skeptical of militarization. Rosaleen Duffy of the University of London stated that military approaches to conservation

Do not resolve the underlying reasons why people poach in the first place; and they do not tackle either the role of global trading networks or the continued demand in end-user markets. Ultimately, they result in coercive, unjust and counterproductive approaches to wildlife conservation.

Some have pointed to the “War of Drugs” as a parallel. The US spends some $25 billion each year fighting the drug war, of which $14.6 billion is spent on law enforcement, interdiction, and international efforts. Around 62% of SWAT raids are for drug searches according to the American Civil Liberties Union. US Special Forces have been deployed across Latin America and even Mexico to combat drugs, mostly in a training and assistance role to those nations’ militaries. Despite the enormous amount of spending on military hardware and military-like operations, the availability of illegal drugs has not been impacted.

As of today, it appears that the increasing militarization of conservation efforts is not having the desired impact on the poaching crisis. As with the drug war and even with international terrorism, you cannot simply kill or capture enough of the enemy to stop these practices, especially when there is so often another individual waiting to step up and take their place. However, if I was a ranger on the ground, I wouldn’t mind having a couple extra tools in my arsenal to protect myself and wildlife.