↓ Skip to Main Content
Home › Demand Reduction › Meanwhile, in the Lege: Cracking down on shark-finning

Meanwhile, in the Lege: Cracking down on shark-finning

Here in Austin, the Texas legislature is well into its biennial session.  Amidst the thousands of bills that have been filed, one prominent bill has a strong wildlife conservation connection.  In February Representative Eddie Lucio, III (D-Harlingen) filed HB 1579 that would ban commerce and transportation related to shark fins in Texas.  After being successfully voted out of the Culture, Tourism and Recreation Committee last week, the bill now awaits scheduling for consideration on the House floor.

HB 1579 would bolster existing federal regulations by making it a misdemeanor to buy, sell, or transport shark fins in Texas, regardless of how they were acquired.  It would still be legal to trade or transport a whole shark if the body was fully intact.  Law enforcement would be required to destroy seized shark fins after the conclusion of court proceedings.  If the bill becomes law it would be enforced by the Parks and Wildlife Department. 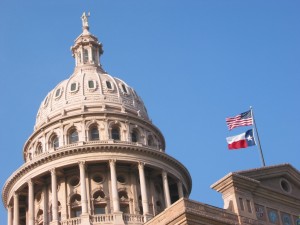 Shark-finning, which is banned by federal law, is the practice of catching a shark, cutting off its fin, and putting it back in the water – where it will usually die a very slow and painful death.  Similar bans have been enacted in ten other states, including California and New York. Since then Texas has become an even more prominent American hub for the global trafficking of shark fins.  In addition to being a transit and import point for shark fins that have been inhumanely obtained, Texas is also a site for the practice of shark-finning itself.  As a result shark populations in the Gulf of Mexico have been experiencing significant declines.

Rep. Lucio previously filed a similar bill in 2013 which passed through the House.  But its Senate companion, SB 572 by Senator Larry Taylor (R-Friendswood), died in committee after opposition from some Republican legislators who stated that since it was legal for Texas fishers to catch sharks and kill them before taking their fins, the problem was only those who cut off the fins illegally.  The trouble is that it is very difficult to determine whether a particular shark fin has come from a legally caught shark or not.  And in truth the demand for shark fins in Texas is far less than the demand in other countries to which Texas shark fins may be trafficked.

It is clear that HB 1579 is intended to reduce the incentive to take the fins off of all sharks, whether through legal fishing or illicit means.  However, a ban this broad understandably upsets local fishers who may earn part of their living from selling shark fins.  The question is whether legally maintaining this trade helps reinforce overall demand for shark fins regardless of the legality of their acquisition.  This dilemma has parallels with debates over whether to legally allow limited sport hunting of certain threatened species, or the trade of ivory that meets certain criteria.

Rep. Lucio’s bill has received strong support from a variety of animal rights and environmentalist organizations, including the Texas branch of the Humane Society and Oceana.  But in a legislature that often fails to prioritize environmental sustainability, it remains to be seen whether this proposal will become law by the end of the session.

We have seen throughout our classwork how the issue of wildlife conservation intersects with a number of other policy spheres – and that when such a sphere is a high governmental priority (national security, for example), more attention and resources may be directed to tackling the problem than when it is seen only as an environmentalist issue.  Moving forward, because the legislature is dominated by Republican members it may be useful to frame this issue as one of law and order rather than one merely of conservation or animal rights.  By encouraging legislators to be “tough on (wildlife) crime”, supporters of HB 1579 may increase the likelihood of its passage.

One comment on “Meanwhile, in the Lege: Cracking down on shark-finning”