It is Time for Congress to Take Action Against Wildlife Crime

Wildlife crime is one of the largest transnational organized crimes along with drugs, arms, and human trafficking. The U.S. Government has taken important steps to combat wildlife trafficking, however, now congress should Congress take action to consolidate the Obama administration’s priorities and define wildlife crime as a predicate offense. The last male northern white rhino in the world at the Ol Pejeta Conservancy in Kenya. Source: The Guardian

Wildlife crime risks the safety of animals and communities worldwide. Because of the poaching crisis, today there is just one white male rhino left; selling ivory in the black market fuels illegal activities of terrorists groups and corrupts government; and wildlife crime is undermining local communities capacity for sustainable development.

Despite those efforts, wildlife crime has increased in the last years. Actually, since the Secretary of State announced the wildlife initiative in 2012, WWF estimated that rhino poaching doubled in just two years from 668 to 1215 rhinos poached. Moreover, there is uncertainty on the future of the Presidential Task Force on Wildlife Trafficking with the end of the Obama administration approaching. 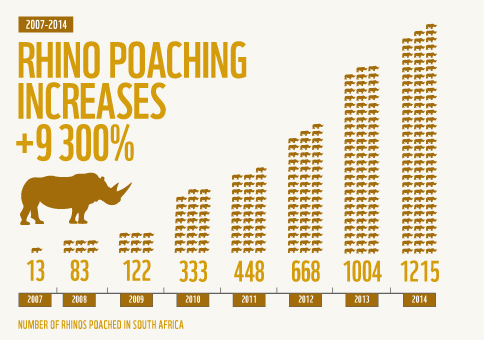 Huge surge in rhino poaching in South Africa, home to over 80% of the world’s rhinos. Source: WWF

For these reasons, it is time for Congress to take action to consolidate existing efforts and preserve U.S. security interests in fighting organized crime. Therefore, Congress should allocate resources for U.S. agencies to join efforts in the fight against wildlife crime– this means that Fish and Wildlife Service, USAID, the Department of Defense and the Department of State should be granted sufficient economic resources to coordinate actions combating wildlife trafficking. Moreover, Congress should make wildlife crime a predicate offense.

Regarding this last point, Senator Dianne Feinstein (D- California) introduced a bill in the Senate Judiciary Committee to make wildlife trafficking a predicate offense.The Wildlife Trafficking Enforcement Act of 2015 would consider that wildlife crime often is connected with illicit activities such as money laundering or terrorist finance. The Congressional Research Service gives this short explanation on the bill:

This bill applies provisions of the federal criminal code concerning money laundering and racketeering to wildlife trafficking violations of the Endangered Species Act of 1973, the African Elephant Conservation Act, and the Rhinoceros and Tiger Conservation Act of 1994, if the endangered or threatened species of fish or wildlife, products, items, or substances involved in the violation and relevant conduct have a total value of more than $10,000. Violators would be subject to increased fines and years of imprisonment. The amounts generated from penalties for those wildlife violations must be used for the benefit and conservation of impacted species.

WWF has an online campaign to support the bill, sign here and ask your senator to co-sponsor and support the S-27 bill. It is time for Congress to act!