The Black Box of the Ivory Trade: Ivory Vendors 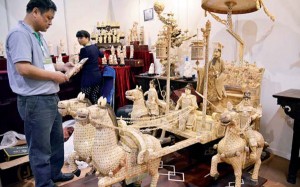 *This blog is part 2 of a 3 part series. Click here for Part 1—Conditional Aid as a policy option.

After one of our interviews in Beijing, my colleague Ana and I realized that while many studies have been conducted on the socioeconomic status of elephant poachers and Chinese ivory consumers, there seemed to be a missing link in the literature:  information on Chinese vendors of illegal ivory products.

Certainly, information is available on the types of stores that sell ivory in China. Some are factories, others retail outlets. Some of these stores sell only legal ivory products, others only illegal, and some a mixture of both.   However, at least in China, it is unclear who the people are who are selling ivory. Some of our interviewees suggested these individuals may be linked to the Chinese government, others suggested that they may just be rich and internationally connected businessmen. Determining the socioeconomic and political status of vendors of illegal wildlife is vital to develop an effective strategy to reduce wildlife trafficking.

If vendors of illegal ivory in China do have links to the government, an effective strategy will be different than if vendors are merely financially savvy businessmen with no government ties. Vendors with strong links to the government may mean an uphill battle in combating illegal wildlife trafficking, but it can be done. The Communist Party of China (CPC) has clamped down on another wildlife related practice among its members before: the consumption of shark fin soup.  The Chinese government banned the serving of shark fin soup at state events in 2012 as part of an anti-corruption campaign. According to a WildAid report, 85% of Chinese consumers surveyed online said they gave up shark fin soup within the 3 years after the ban. Sales of shark fin soup in Guangzhou have dropped by 82% and vendors have moved on to sell other products. It is important to note that these surveys were not specifically conducted on vendors of shark fin soup nor did the campaign specifically target vendors (they targeted consumers).

Nevertheless, requiring vendors that are CPC members to meet certain standards in their businesses should not be difficult.  Ensuring that these vendors meet these standards, however, is a different matter. One of the individuals we interviewed maintained that displaying wildlife products in China is legal. Only selling certain products is illegal. In order to stop CPC connected vendors from selling illegal ivory, the Chinese government would either have to change its laws—making it illegal to possess illegal ivory—or find a way to independently verify that ivory sold from these individual shops is legal. The latter option may be less effective in implementation and may require a fake buyer enter a store to purchase illegal ivory before notifying police. We were told that such operations are frowned upon in China, however, and may result in negative social consequences for the fake buyer.

Disclaimer: As Ana mentioned in her blog post, the Chinese government is very complex. Certain agencies are more willing to take steps to combat wildlife trafficking than others. The point of this article is not to say that the CPC is sanctioning the sale of illegal ivory . No sufficient studies have been conducted to either substantiate or disprove this claim. Instead, this blog points out the need for further research on the demographics of ivory vendors and notes that, if it turns out that most vendors are CPC members or have strong ties to CPC members, there is still hope in addressing the problem.