Debt-for-nature (DFN) swaps “involve the purchase of a developing country’s debt at a discounted value in the secondary debt market and canceling the debt in return for environment-related action on the part of the debtor nation.” The debt that is purchased is then returned to the debtor nation as equity in the form of a debt bond or an infusion of cash to be invested by NGOs or other institutions into environmental projects. This arrangement has the potential to benefit both the debtor nation by providing it with financial relief and the creditor nation that has a vested interested in the preservation and protection of wildlife resources around the world. DFN arrangements can greatly increase available funding to conservation organizations. 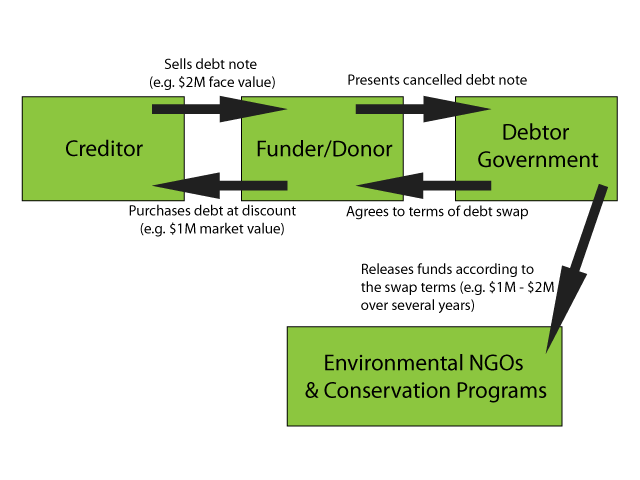 In Peru, wildlife organizations are active in establishing and maintaining reserves across the country. With significant financial support from the U.S. government, Peru has successfully built infrastructure and trained personnel in the protection of species-rich habitat by building guard posts in key areas to prevent illegal logging. According to Gockel and Gray, the U.S. forgave over $5 million USD in Peruvian debt, which was further supplemented by $370,000 USD from several NGOs including WWF, Wildlife Conservancy, and Conservation International. The U.S. contributed $10.6 million USD more in the 12 years that followed.

Interviews with locals showed an increase pro-conservation attitude due to a sense of ownership over the wildlife and improvement in the socioeconomic status of those involved. Citizens were directly involved in recovery programs for threatened species such as the side-necked turtle, the Paiche (Arapaima), the largest Amazonian fish, and in the planting and monitoring of mahogany nurseries. Local NGOs were crucial in providing necessary training and oversight in rehabilitating forests, and continue to do so, funding permitting.

Debt-for-nature is not a cure-all for the rapid decline in wildlife populations in range countries. It is one tool that can be used in conjunction with domestic policy reform and international NGO support. It has shortcomings as well. In their study, Cassimon et al., highlight a number of potential problems with DFN programs. First, the amount of actual ‘fiscal space’—allowing for conservation-oriented discretionary spending—created is uncertain.

Another issue is that countries may cut back on their conservation budgets in light of debt forgiveness promised by the U.S. In Peru also, quantifying the conservation benefits in the absence of long-term monitoring and evaluation is difficult. Results are difficult to quantify because disentangling the effects of numerous on-going and simultaneous conservation projects proves problematic. Furthermore, without sustained, regular funding, long-term conservation projects risk being short-lived.

Gockel and Gray suggest a more active impact assessment on habitat and wildlife to better understand successes and failures. DFN will likely be most effective in countries where modest debt forgiveness will make the largest impact on the economy, conservation organizations respect national sovereignty and law, and both NGOs and government bodies provide financial and logistical support. 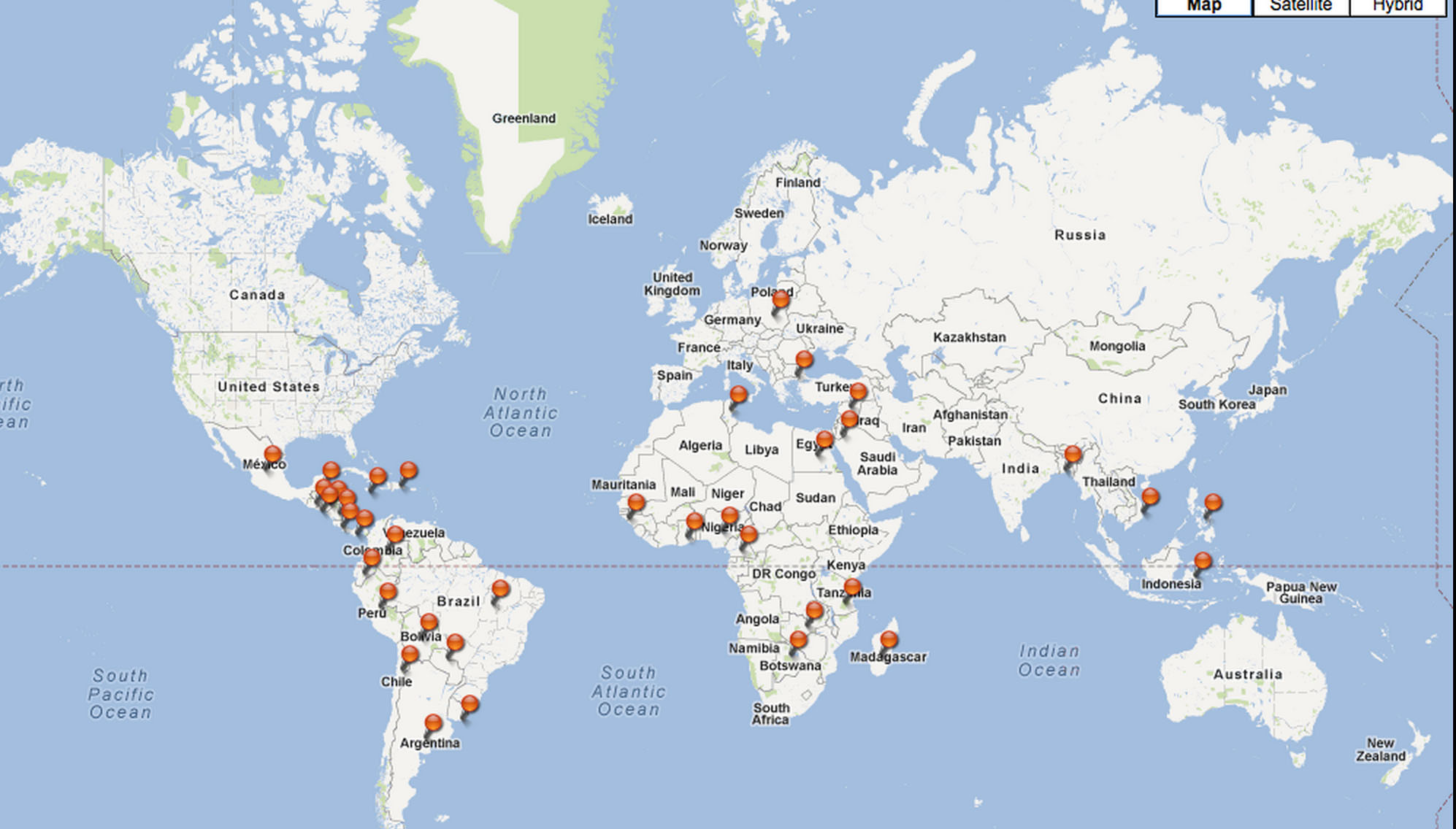 Although sometimes less targeted, DFN plans, like payments for ecosystem services programs—in which governments issue direct cash payments to landowners who forgo intensive agricultural practices and rehabilitate wildlife—would allow the U.S. government to directly fund conservation efforts through NGOs and government agencies in range countries. Debt-for-nature swaps could provide initial capital and oversight to monitor and protect endangered animals. NGOs such as the World Wildlife Fund and The Nature Conservancy have been involved in debt-for-nature swaps since the 1980s in South America, Africa, and Asia, providing long-term funding for conservation projects. With additional funding and support from USAID, the experience and expertise of these organizations can be used to expand DFN projects and curb wildlife trade.

DFN is not a new approach for the U.S. government. From 1998 to 2008, the U.S. forgave $109.5 million in debt to 12 countries (mostly in South America) through the Tropical Forest Conservation Act, generating $188.5 million USD for conservation projects. Funding can be targeted for relocating acutely threatened populations, a strategy that has been effective in protecting the Asian Rhinoceros in India and Nepal. Community patrols and conservation education are other areas for funding initiatives. Additionally, active in-country involvement of wildlife NGOs and domestic organizations can help ensure that the money be spent properly and local communities are involved.

These organizations can provide training and equipment and work as middlemen for local concerns to be heard by government bodies. In Peru, the active involvement of local environmental groups has been crucial in developing security infrastructure and training local communities on how to maintain wildlife and prevent poaching. It has also fostered a sense of ownership and responsibility over wildlife resources. In Africa, where communities and officials are often at odds over rights to natural resources, there is potential to develop cooperation for mutual gain.

According to the U.S. Treasury department, many U.S. debtors are in African countries where wildlife is under greatest threat. Figures since the end of 2009 estimate total outstanding debt for Sudan at $1.93 billion USD, for Zimbabwe at $45.5 million USD, for the Democratic Republic of Congo at $475.1 million USD, and for Somalia at $698.4 million USD, to list a few. All of these nations are natural habitats for either forest or savannah elephants and have seen dramatic decreases in their populations over the past several decades. There is potential for DFN agreements between the U.S. and its allies in these regions.

Many of these nations have tenuous relationships with the U.S. government. The U.S. has sanctioned members of Zimbabwe’s government and business elite for human rights abuses. Lessening these sanctions could be leveraged against compliance international wildlife trafficking laws. Sudan’s elephant population has decreased to as little as 3% of its 1970 population estimates and this is only being exacerbated by the current civil war. Although a controversial approach, U.S. military and humanitarian aid to these countries could be made conditional on how these resources are used and protected. Requiring that portions of funding be used for armed patrols and equipment to monitor and prevent poaching is one example of how the U.S. through USAID can exercise greater discretion in how aid is used, while in-country NGOs and environmental groups can provide supervision and guidance.