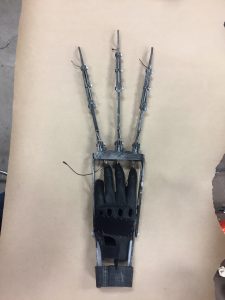 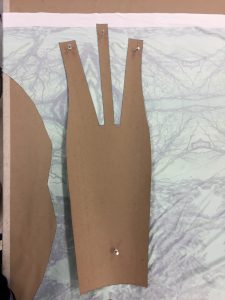 We copy the shape of hand, and add thickness to where the hand needs.

Cut the paper pattern down, and cut 2 pieces in stretch fabric which have to be symmetry.

It means that once you chosen one side of pattern to cut, then when you cut the second piece, you have to turn the pattern to other side to cut. 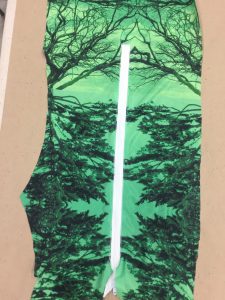 For the aim of the skin gloves could be wearable, we also add zipper on to stretch fabric.

According this hand is blocky, particular the part of finger turn to the other finger, so I cut 2 strips of stretch fabric, this part we called gusset, to create the turning shape and give the fingers thickness. 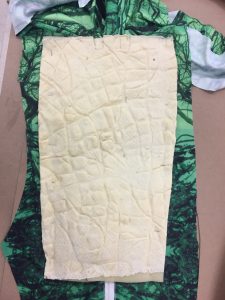 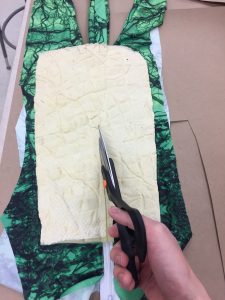 And sew the zipper edge again, secure all materials attach together where is around the zipper.

And cut the latex skin at the top and middle of the zipper. 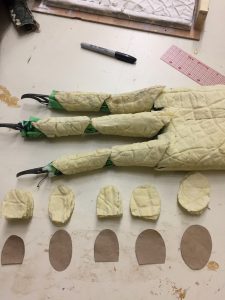 Prepare different oval size of latex skin to create the texture and knuckles. Use Barge to glue together.

After class meeting, we all think the latex skin is to heavy, so that caused the hand lost the flowing movement. Right now, we would not cover whole hand to decrease the weight from covering materials.

As deadlines creep closer and the school year gets rougher, progress in the Raptor lab is chugging along at a reasonable pace. The guest artist Zoë Morsette came in to present My Life in Art, as well as to assist with foot molding. As a member of the electronics team, she mostly assisted other sub-teams but voiced her approval of our progress.

In the electronics world, lots of new toys came in this week. Our new super inverter arrived, capable of driving up to 50m of the desired EL wire. Unfortunately, the start up process requires one too many button presses, and steps are being made to circumvent this button. A special order super inverter is already on its way, one that hopefully will not have this issue.

In addition to the new inverter, the lab has also received the new Lithium ion battery for power. This monstrosity is rated for 6000 milliAmp hours, and is able to power our system for twice as long as the previous battery.

All six raptor eyes have been printed, soldered, and tested. Wiring these eyes may prove to be a challenge, but that is a bridge to be crossed in the near future.

Lastly, the integration of all the systems was completed this week. The Arduino stack that controls the EL wire and wireless communication was combined with the addressable LEDs and passed the initial tests.

All in all, the electronics team is steaming along, with progress running smoothly. While keeping my head buried in various power equations and 3D models of Arduino cases, I occasionally picked up some conversation and observations in other subteams.

The body team managed to build and configure all three raptor backpacks for the three performer sizes. The foot team has used our guest artist’s advice and upgraded their boot. The hands team has started to ramp up manufacturing, and the head team has modified the look of the head, but primarily has redirected their focus onto the tendons of the raptor.

Things are heating up in the Raptor Lab, and the manufacturing rush will continue to escalate. However, I am confident that we will meet our deadline with enough hard work and dedication.

First off, we had to clarify our story telling. These raptors are supposed to look like “new computer technology of 1999/2000’s” We had to make this raptor look like computer hardware and not a scrap metal monster. Because each team had to use such varying materials to create certain functions for this dinosaur I knew we would need to add more consistent visual transitions to the surface finish to unify the overall design. In addition, we needed to allow enough variation to show all 3 dinosaurs are not only versions of each other but show progression in amount detail in skin, wire and lights on each.

Originally I was hoping our ABS and Rattan structure would be skeletal enough to serve as our first raptor but the masses of each appendage were so varying on places like the neck and foot that it needed the surface to coalesce with another material. Also, places like our head had so many small line details that when looking through the hollow structure – it was difficult to understand what this creature was even supposed to be.

I started with varying dimensions of materials – leaning towards smaller more intricate designs but the lines just became more confusing. Ultimately, I was able to see that the scale of the line work needed to increase not only in diameter but in bundled width. By creating flat arrangements of EVA tube foam we gave more visual planes of the raptors body by alluding to muscle/tendons. This larger surface coverage and length of line made it feel like a more solid menacing creature. 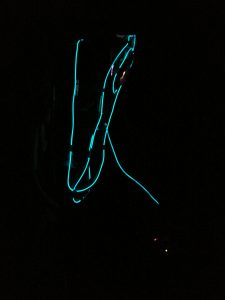 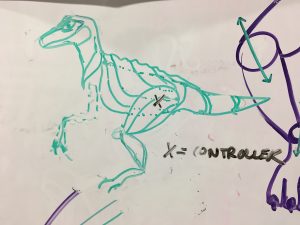 When we played with lights the EL wire followed the ligaments naturally and highlighted the wire webbing. At first we laid the chasing LED lights on the outside – as they have a nice detail with graphic on the tape but as JE mentioned, anyone who knows what LED wire is – will just see it as that. Cristina had a brilliant idea of putting the LED chasing lights on the inside of the structure and magic was made. We stood there gawking at the giant beast, which had these moving lights inside of it like an animatronic demon and I couldn’t stop smiling. It now looked like it had a pulse a heartbeat and living presence. The chasing lights on the interior gave it a more organic and mysterious electronic vibe that the lights show of it being on the outside.

Our next goal will be figuring out how we polish all of our style lines and shapes. The head has been the trickiest for me as it’s so important for the face to read as menacing and the style lines have to be just right with the layers of EVA tube foam in the proper direction. I don’t think it’s quite there yet and the nose/snout has been the most puzzling attribute. I’m really excited and relieved to see some elements of the finished ideas for us to move forward on and can’t wait to continue playing with the shapes to enhance our fierce friend. Working on it is super addicting and reviewing the lists of how many ways I’ve tried to apply a wire surface only reminds me how important it is to have TIME for exploration. These raptors would never have made it this far without the time to explore and refine our ideas, tools and materials.