My other teammates have touched on some of our failures, our success, and our technical processes, so I am going to speak on our collaboration and what the diversity of our members has brought to the table.

In our group, we have one Theatre Design major, one Arts and Entertainment Technologies (AET) major, and two Electrical Engineering majors.  With each of those backgrounds comes individual habits, and practices from studying in that field.  On top of that, each member is also incredibly unique in their way of thinking, which is to say more specifically, their approach to problems, problem solving, and collaboration. 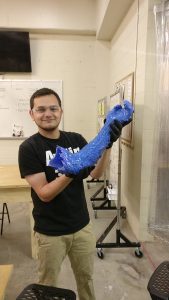 Before I say anything else, I want to make something very very, clear; I am not trying to point fingers, or say that any kind of personality, or behavior is bad or wrong.

These are just situations and things that we have noticed about our group that have cause some problems along the way.  All people think and act differently, and one of the learning opportunities of this class is to learn how to work with people of different fields of study, as well as those who have different thought processes.

Our first issue we ran into, mostly at the beginning of the process, was the interaction between our group and the timeline.  We have members, that by personality are comfortable making decisions and moving forward quickly, but others who are not so much.  They want to see as much information as they can before moving forward.  Each has their merits, but the fact of the matter, is that we didn’t have time to look at every piece of data of materials, we just needed to make a decision.

Our “silo” issue is still something we are actively trying to watch and keep at bay.  The term “silo” comes from a conversation I had with one of our instructors, J.E. Johnson.  When we spoke to him about our troubles he shed light on the fact that we fell into the trap a lot of others do as well.  We thought we were collaborating and working together, but in reality we were just alone in our silos working on something that may, or may not, be useful to the project.  From what I have observed, this was the result of less than stellar communication at times, but mostly just personalities of the group.  Our group members just have a tendency to shift away and start working on our individual projects without keeping up communication with the other members. 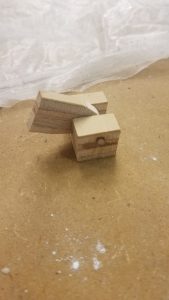 A wooden joint gets the job done, at a smaller cost than buying and a shorter time than 3D printing.

To end on a slightly more upbeat note, our differences have also helped push us forward (or kept us afloat, depending on your view).  The natural way we think as individuals compliments each other in some respects.  At it’s core, we have two engineers, and two artistic design thinkers.  When one starts to over complicate, or be over ambitious, the other side can reign them in faster than trial and error.  It saved us from trying to model everything via 3D printing when just cutting and sculpting wood would work just as well.  Having a viewpoint that is further away on the spectrum (Architect to Sound Designer as opposed to Theatre Director to Lighting Designer) prevents over complication by having someone say “Why not this?” or even just asking “Why like that?” and during the explanation out loud something becomes more obvious.

At this stage in the process (one week from shooting), progress slows down, and it is a lot of clean up and finalizing.  This also means more problems and stress than their are satisfying successes (or at least in my experience).

The less you have those big successes, the more you will get dragged down by the problems, and in turn it is hard to speak positively about the situations.  However, this class has taught us that there will always be problems when you work in a group, because everyone is different and thinks differently.  This project, and this class, is the first time many of us have truly worked with someone with an entirely different skill set and training.  It isn’t super common to be in a collaborative based class with a major different than your own, and it is teaching the group a lot of what moving out into the “real world” might mean.