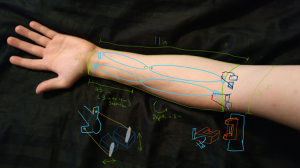 Sketch of my purposed animatonic

This is a simulation of how the universal joints can rotate. Our version has one side fixed leaving the other side to rotate freely in any direction. 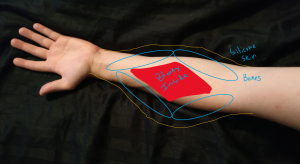 This is an example of an instance of the animatronic moving. The oval controlled by servos closer to the elbow will puppet the other oval and move it. This multi-directional animatronic can give us the freedom to snap the arm in any direction we want so we can see what looks best.