For 2nd prototypes, the hand team started off with moveable fingers, connected by springs. Our goal was improving the structure. We also tried to substitute springs with rubber bands, since the springs are not strong enough as we thought.

Last Friday, we headed to the foundry, used the CNC machine to cut out 2 sets of finger parts, one was going to be connected with springs, and the other rubber band. We had a really hard time using the machine. We used a different material from last week. This time, the wood was made of three layers, with the middle part firmest. It took us whole Friday afternoon to figure out the best way to use the machine. At first, we tried to let the machine leave a thin layer of wood, thick enough to stop the parts from moving around as the cutter moves, but still allow as to pop them out afterward. We called it “onion skin”. However, no matter how deep or shallow we set as the cut-depth, the part kept moving around. We were so frustrated that we gave up this method. 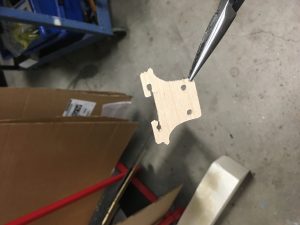 Longhorn! An imporant part for 2nd protoype that connects rubber band around a joint 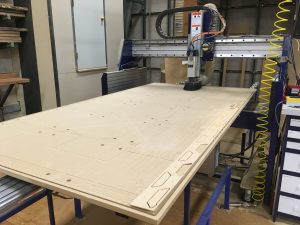 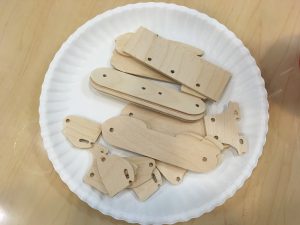 A plate of fingers! fresh cut by the CNC machine

For our 3rd prototype, we combined our thoughts from the 2nd prototypes. Also, JE helped us a lot by providing whole box of different sizes of screws and stoppers. Among those, plastic screws and washers allowed us to reduce the final weight, special parts for plane models makes connection between fingers and palms easier, and replaceable, and a special hexagon that prevent the joints from getting loose. Another suggestion that we got from JE was, using tabs on woods so that we could turn the pieces into a 3-D puzzle-like pieces.

Wednesday, we came up with lots of exciting ideas. In the Morning, I explored on those little parts, and finalized with the connection shown below. With this connection, we can totally replace the fingers without destroying the remaining part. 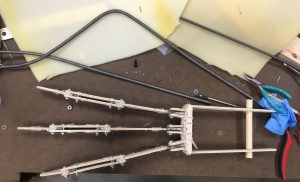 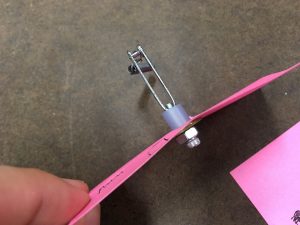 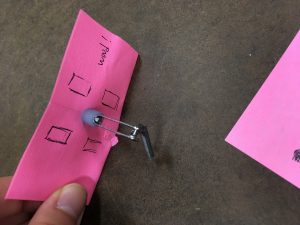