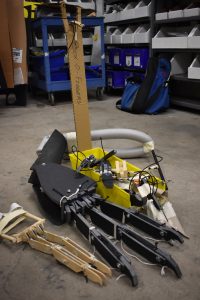 Pile of hand and finger prototypes

I was thrilled to be allowed to work on the raptor hands for this class. I have always been fascinated by the mechanics of hands, and now I had this incredible opportunity to make a working pair myself. Except what I didn’t anticipate was having making dozens and dozens of non-working, unsuccessful versions of hands and fingers before I got to the actual set of hands. We’re not there yet. We’re still a long way away from the final set of raptor hands. As it turns out, hands are pretty complex and it’s difficult to re-make what Mother Nature has spent years perfecting.

We wanted the mechanics to work like the real thing. We took inspiration from many of the DIY hands we found online; there are several versions of this concept. The figures are hinged together and there is a string running through them so that when it is pulled, the fingers bend. Just like tendons and muscles. Here is a link for reference.

We started with a finger. Xindi, fellow hand maker, made it out of a little piece of tubing and some elastic, and there it began. We made finger after finger after finger to try and find one that would work vaguely the way we thought it should. Then there was the challenge of making a palm and attaching them together. That was another whole ordeal. We were prototyping for a prototype. Prototype-ception. I’m not going to lie, it was disheartening at first to keep making finger failures. I knew failure was going to be a big part of the process; I just didn’t expect the sheer volume of it.

For the second round of prototypes I wanted to focus on fine-tuning our parts. I drafted the “bones” in illustrator to be laser cut out. We ordered a medley of springs with various tightness and sizes to experiment with. I went through lots of rounds of failures yet again. It was difficult to find the right spring rate to hold the weight of a joint but also bend easily. On top of that, the laser cutter we planned on using was down for the week due to maintenance. Luckily, J.E. was willing to help me edit the “bone” drafting to accommodate a CNC machine, where we cut them out on 1/8” plywood. It worked for the most part, except the wood was pretty thin and susceptible to damage. The little holes drilled in the wood to hook springs and strings on frequently broke under the pressure. 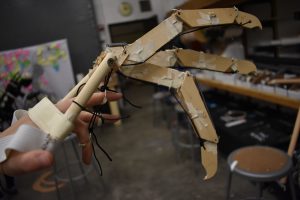 So I’m slowly getting used to failure, but I’m getting better at it. I’m learning to let go of ideas I though were really good but in practice are not. I’m learning what doesn’t work, which is a lot. We made it through this second week with a better functioning hand and I’m still genuinely excited for the next prototype. I’m thinking ¼” laser cut acrylic, with standard 3/8” bolts for hinges. Stay tuned for more failures.