Hello! My name is Natalie and I am part of the Bat-Camcorder team, where we are currently in the process of making an automated camcorder for Live Performance where the camcorder will be able to “blink”, move its “eye”, have sound effects, and have a spring release screen. All by the push of a button! 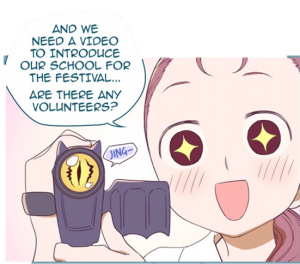 What I have lovingly dubbed the “BatCam” has already undergone a number of changes since our first week, with the biggest change being the design of the body itself. We have 3D printed a few different forms of the body with the first two iterations turning out drastically different. We also very quickly realized that one of the biggest challenges of this project is going to be the small size of BatCam’s body and the ability to get all of the components needed for it to operate to fit inside. As Taylor mentioned in her previous post, the functions we will include in our project are …

Part of our issue with the size of our BatCam was actually partially resolved by a happy accident! When the 3D printer skipped a layer in printing, it caused a full separation near the back end of the body of our BatCam, and because of this, we realized that the access door we had originally planned for on the side of the camcorder would be too small to allow for proper access to its interior. But, if we made the access door out of the back end AND side of the BatCam, it would not only be much easier to slide on and off, but allow that extra room in order to access the interior of the camcorder comfortably. This way, if a component needs to be replaced, the electronic components stay easily accessible. And it just goes to show that all mistakes aren’t bad and can actually show you a better way of accomplishing your goal!

In addition, by using a Camcorder we found at a Second-hand store, we were able to delve into its mechanics and learn about how it was put together (spoiler alert: a LOT of tiny screws). Even though the camcorder we found was already broken and meant for film, we were still able to take it apart and find parts we could possibly salvage and use in our own Camcorder. We are hoping to integrate its speaker and one of the switches from it into our own creation which will cut down on cost and put an old camcorder to use! It is always super helpful to see how a real camcorder is put together so that we can learn from it and adapt it to our own needs.

Having that initial 3D print on the very first week of prototyping helped us to see and understand a lot of flaws in our original design. A lot of them having to do with the logistics of how it will be put together and stay modular. With each new version, we are able to learn something new about its design and whether a component is in the wrong place, wrong size, etc. and we are able to discuss the needed design changes. As we get our materials in the mail and integrate them into the design, more versions are sure come and we are getting closer and closer to our final product!