Our cyberpunk raptors are slowly but surely beginning to show signs of life, but we can’t start shouting “IT’S ALIVE!!!” until we include the cherry on top of this robotic sundae: The Head! For me personally, this is the pièce de résistance. It’s the thing that makes me suspend my disbelief fully and wonder, as an audience member, “Did that thing just look at me?” So I thought that for my blog post this week I would share a couple of different prototypes from our journey through head-making.

Its very hard for me to pick which of the three will be my favorite. Much like myself before I’ve had my morning coffee, our raptors will each have different personalities, as well as their own distinctive look, but they will all share a few common characteristics regarding the head: 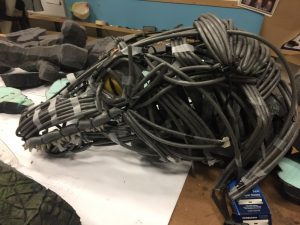 Our first raptor is the most bare (in the sense that it has no actual skin on it). Its like the audience can see the beginnings of the skeleton of the robotic raptor and all its interior workings. Raptor number two will also have a flesh-less face but the wiring and hardware elements will be much more prominent. 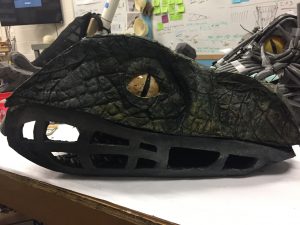 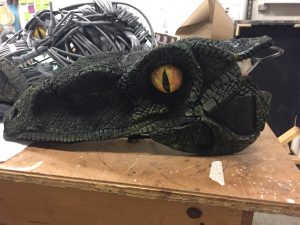 These two are different variations our team looked at for making a fleshy robot hybrid head. The one on the top is EVA foam carved out to look like a metal understructure with latex skin applied on only the top half. Like a sort of a robot in a state of undress. The photo on the bottom shows an ABS rod base that is covered in carved foam panels strategically placed around it to shape the head. This one makes me think that the ABS rod face is wearing a foam mask. 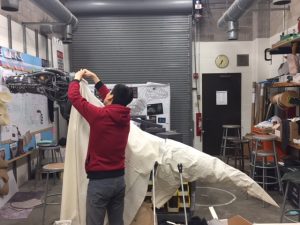 Here’s a behind the scenes look at one of my skin team partners draping a ‘skin suit’ pattern just to give you a sort of reference for how big these heads are. I think it looks like the raptor is getting ready for its wedding day, don’t you agree?