It’s been practically 2 months, dozens of prototypes, and so much stress. We’ve fallen into the routine of creation; that is we have figured out how both create and solve problems. We’ve learned what materials we want, and what materials we need. All teams have moved forward and continued to perfect their pieces.

In the past few weeks we finally put our first performer into our prototype and it was wonderful. There was a life that none of us could have imagined in the Raptor.  There were, of course, a few problems with the structure itself that we realized as the performer was placed into the suit. The rib cage was too big. The harness didn’t sit where the weight was distributed to maximize the performer’s comfort. There wasn’t enough room for electrics to easily mount their units into the cage. It seemed like everything was coming together and everything was falling apart. 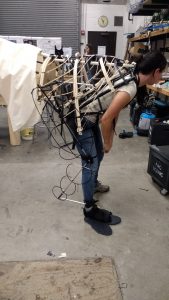 We immediately saw the problems and began to address them.

We grabbed a harness and began to create the new body. This one became sleeker, cleaner, more agile. The raptor grew to look, in my opinion, more like an extension of the wearer and less like a giant backpack. Not to mention, it became immensely lighter. We became sparing with our materials, ensuring we kept only the necessities. We kept our previous tail, and continued moving forward into the new raptor. We wet and wrapped our rattan around a tube so it would have the nice circular arc of the back. We worked the most efficiently we have.

Then, during our weekly presentation last week, it was mentioned by Ron, last week’s guest artist, that we could create a way for our tail to be controlled by the performer. Sam and I jumped on this immediately. We grabbed some string, tied it through the tail, and to some elastic that the performers could put on their arms. It worked wonderfully. As the performer moves her arm forward, the tail moves with her. 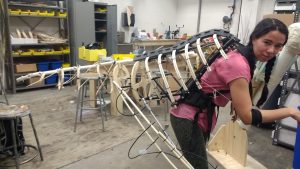