↓ Skip to Main Content
Home › featured › In the Beginning, There Was…?

In the Beginning, There Was…?

What would hook someone if they were considering joining this class? Is it the prospect of learning 3D printing, the allure of puppetry, or the thought that they would be a part of ground breaking technology? When one thinks of taking a raptor class, what does one think of? Claws? Teeth? Electronics?

Well, I would bet money that few would think of exercises in organization. Even I will admit that my first thoughts did not go to hierarchical structures, flat organization, nor mind maps. Yet, where else can one really begin when working on a project of this scale? As A.A. Milne said, “Organizing is what you do before you do something, so that when you do it, it is not all mixed up”. And so, an unexpected beginning to a raptor class was formed. We students would set out to develop what is, in my opinion, the most difficult yet crucial portion of the class.

Will we work through flat organization? Will we work by division of body or mechanics? Will there be team leads? All these questions and more needed to be answered before we could get to the teeth and the claws. Answers to questions like these would form the foundation on which everything would be built and lay the basis of all actions to come. If there are cracks here, if there is confusion, the project could and will come tumbling down around us.

So, the ultimate query became- In a class of 16, how can we organize our ideas and tasks in a meaningful way to ensure a successful project? Answering this important question was the goal of week one. Led by our instructors, we ventured through several exercises in order to begin finding the answer.  Each exercise built on the last, and by the second class we would have a keen understanding of the challenges of starting a successful group project.

Our first exercise in the process was to create our mind map. This was a group activity in class that allowed for open discussion and got us thinking about specific issues . We used sticky-notes to express information on four sections of the project.

We then placed the sticky-notes over our life sized rendering of the raptor puppet in the areas of the body that pertained to our notes. 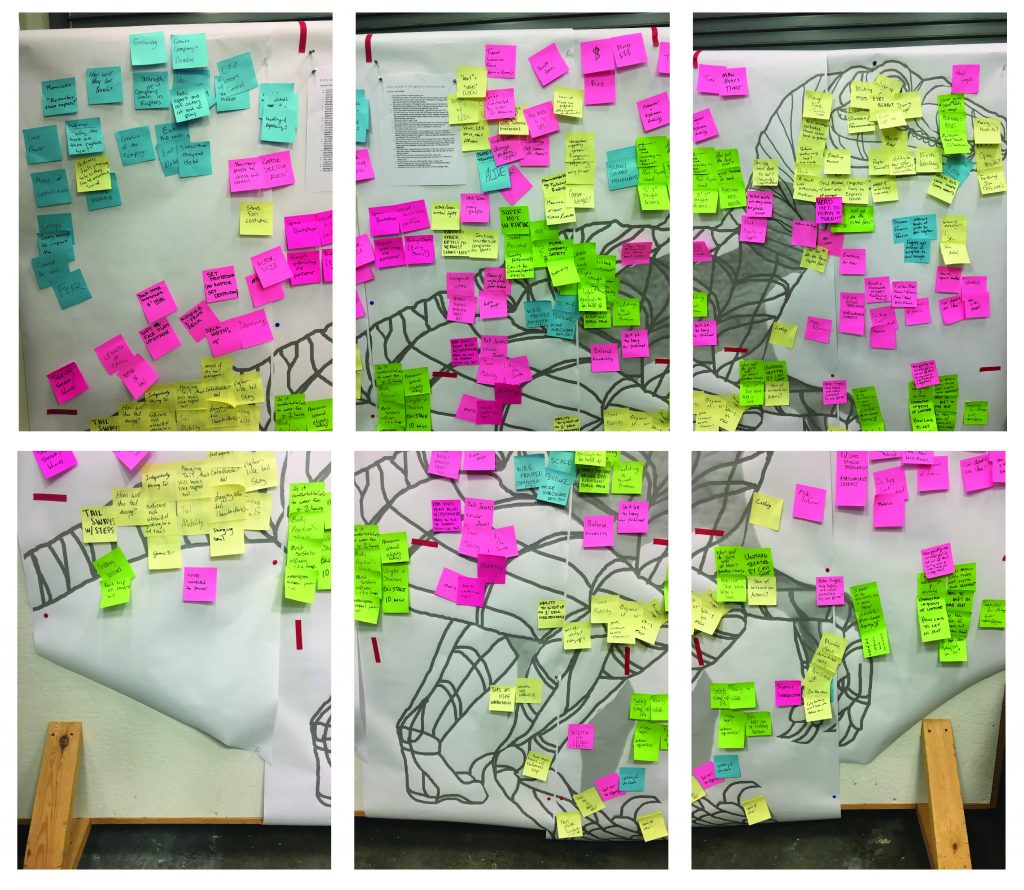 Using these topics we added specs given by the design team, questions we might need to address, and problems that might arise during the course of the creation process. Many notes were connected to each other in one way or another and let us see how the areas were tied together. This free-form brainstorm session was an interesting way to get our minds thinking about the project’s details individually and yet at the same time be able to see them as a whole.

After a time, we grouped what notes were related and talked through some of the questions and problems. In doing this we were given the material we needed to move onto the next step of the organization process.

Next, we took what we discovered from our mind map and wrote Design Briefs that clearly stated what was needed for the project. This was not an exercise in explaining “how” we will create the raptors, but instead a way for us to clearly see “what” is necessary in the building of these creatures. Each student was given a partner and together they created their version of what was needed.

It was interesting seeing the different design layouts of each team. Some were presented in a paragraph format, and others used visuals to express the needs of the project. However, everyone had most of the same information thanks to the foundation we made with our brainstorm session. I feel confident that anyone of us could take our design briefs to another company and they would have an accurate idea of what the goal of this venture is.

Having never written a design brief myself, I felt I learned a new crucial step in the beginning workings of any undertaking I will work on in the future. It is a useful tool for clearly seeing the requirements, budget, constraints, and timeline of a project. Having these things clearly laid out will will help get to the next stage of  the process: Organizing the division of labor.

For some useful tips on writing your own design brief click here:
http://productdesignmanagement.com/how-to-write-a-product-brief/

After the next level of our foundation was laid with the design brief, it was a simple matter of weighing pros and cons to create the layout of division of labor… I say “simple” but truthfully this was a real test. We had the facts, the ideas, and the specs, but how do you start to divide that work among your peers in a fair, level way? In trying to answer this question, our exercise was to make an organization chart showing clearly the separation of labor and responsibilities.

While the design briefs were similar in many ways, the organizational charts varied widely. Some, including myself divided the work by sections of the body: Hands, Feet, etc. 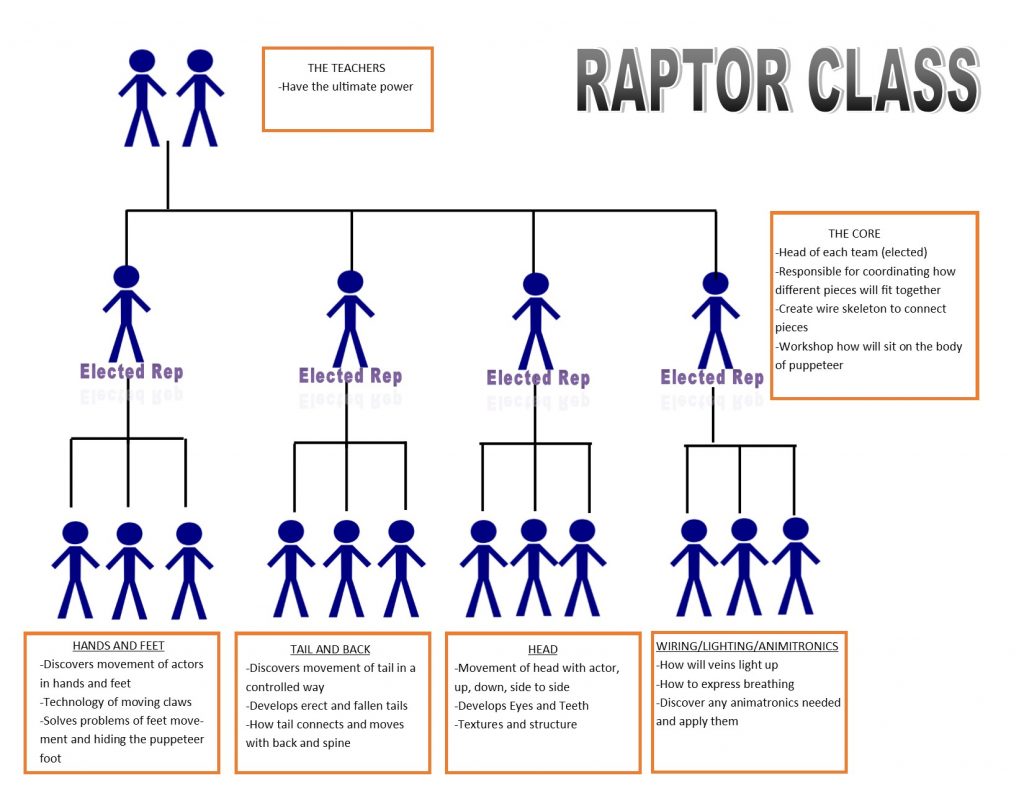 Others divided the work by mechanics and structures: wiring, skin, skeleton, etc. Some made the chart a true “Flat” organization with no head of the group, while others saw a need to include team leads.

While every teams chart was different, each had pros and cons, and brought us yet again to the ultimate question in our foundation exercise…how do we divide a raptor into 16 sections?

Where is a surgeon when you need one am I right?

Ultimately, this is the question we tackled in our second class. Taking what we had discovered so far in our exercises, the entire group discussed what to do next. During class, we gave true flat organization structure a chance and talked through how we collectively thought the work should be divided. The question was harder to answer than we thought, but by the end we had formed a basis of an organization structure.

We started by talking pros and cons of each teams charts…and we talked some more…and some more. By the end we were tired and a bit frustrated, but we had successfully broken the work into three broad categories: Artistry, Structure, and Electronics, with several sub categories. We then added our names under the sections we were personally interested in being a part of. 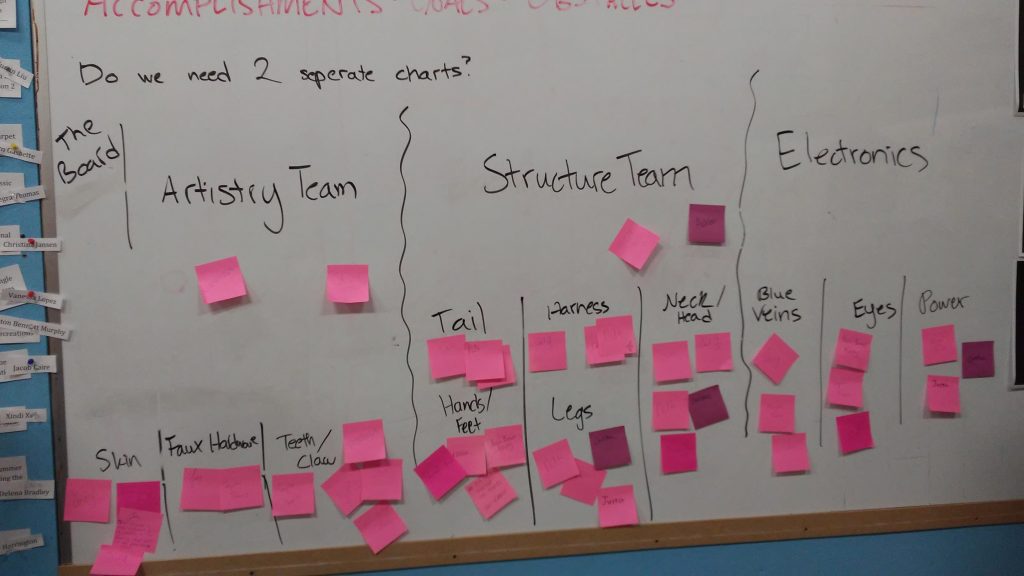 After class, our instructors used this info to divide everyone into teams who would then get together to start working on their first prototypes. 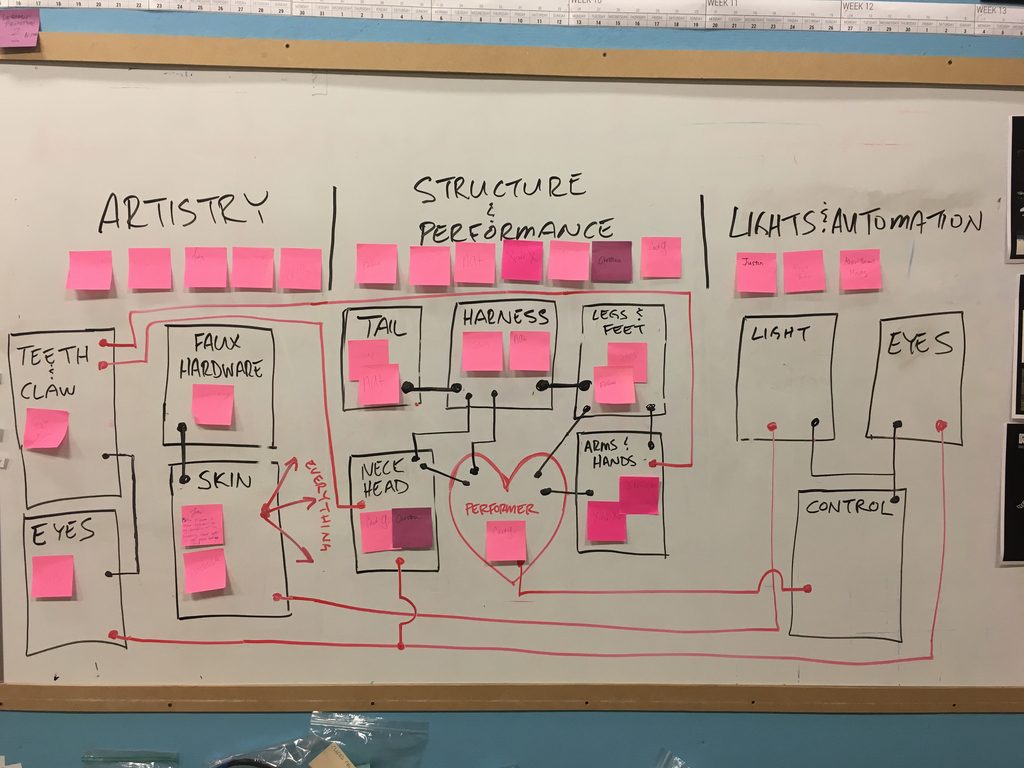 And so we had our foundation. Our goal was accomplished and we could move forward at last!

The Challenges to Our Organization

With every new project we experience some challenges with the initial approach. For me, and probably many others, this was my first time participating in a flat team structure. A flat team structure usually has no job titles, managers, or seniority. Everyone is seen as equal and the group is self managed. This structure, in regards to creating our organizational chart, had its pros and cons:

In the end, I would say we got where we needed to be, but it took more time than I expected to do it. Though flat organization can be a plus especially for developing broad concepts, I think these exercises have shown me that a “flatter” hierarchical structure, or one where there are still a few layers or hierarchy but not enough to discourage self management, is best, particularly in making decisions on smaller details and in learning environments where students may still need guidance with the process.

I personally learned a great deal about this crucial stage in project development. It is easy to get excited about the fun stuff, and hard to remember that before that fun stuff comes a lot of planning. When you set out to start a new project, always remember to set your footing. Don’t shy away from those beginning questions. Face them head on, spend time on them, know where you are going and the rest of the project will fall into place. Our class has formed its base, and I feel confident our foundation has been strengthened. Those raptors now have a fantastic stone slab to stand on, no cracks in sight.