We went back and forth on what we wanted to make our robot arms out of, as we did not want to make them to heavy to move around, and in the end we decided that very thin cardboard sheets were the way to go. Our robot has a very interesting shape of forearms as they seem to kind of have a piece that is longer that extends from the arm at the bottom. 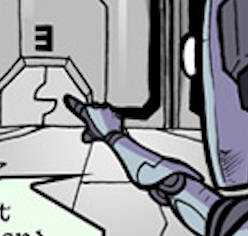 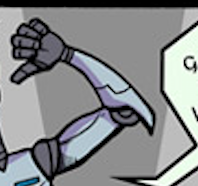 We did not know exactly how to approach making it but we figured the forearms must look something like this. 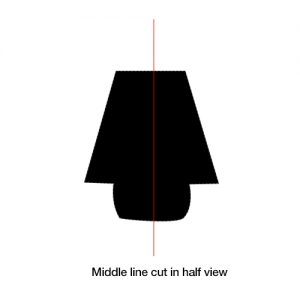 So we decided to take on a very hands on approach. We wrapped Alex’s arm up with sheets of paper in order to get a “cast” so we could properly have a forearm shape. In the video you can see us stop halfway and realize that the shape we were drawing out was not going to work out and looked nothing like the original drawing of the comic which is when we ended up doing the design above.

After we had outline the shape, we cut up here cast, traced what we had outlined onto thin cardboard stock and glued it together. The arm is two different colors because of the paint options we were trying out and the thin black “bracelet near the wrist is just a thin piece of foam with lines pressed into it to give it the design we wanted. 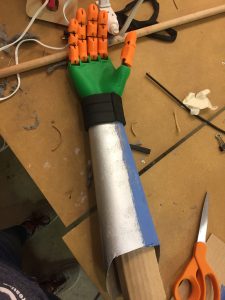 After placing the hand on it, we realized that we had no wrist support making the hand flop all over the place. We added a water noodle on the inside wrapped tightly with cardboard, and on the inside of the wrist we put a small piece of foam with two bolts on either side of the wrist allowing us a slight back and forth wrist motion while also giving us the support we needed. 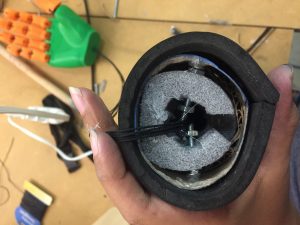 Putting it all together!

We repeated the cast and tracing process again with the forearm.

And here is our semi-finished product! 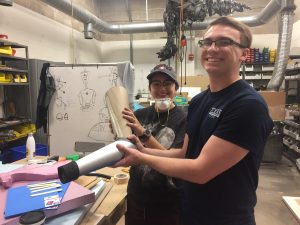 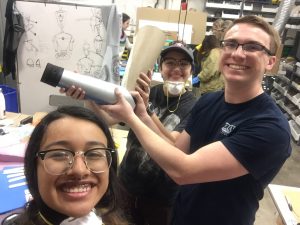 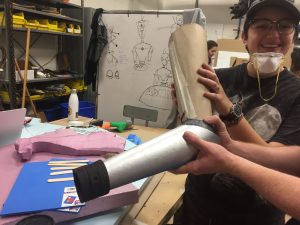 For our elbow “joint” we decided to take paper towels, wrap them up as tightly, but still loosely enough that it’s not heavy, with tape and repeated the process until we had a ball big enough to fit our upper arm.  We are now in the process of re-attaching our hand, painting it, and then attaching that onto our actual robot body!