One Foot at a Time

The most unsuspecting challenge of this raptor build for me has been the complexity of making feet. Originally I was a part of the Artistry Team when then Structure team mentioned concerns about not being able to address the foot while also dealing with the rest of the body, so the foot became part of my responsibilities.
I began with constructing a prototype using different types of foam. We focused on figuring out the shape of the foot and the placement of the actor’s shoe within/around the raptor foot. I also carved a general foot shape out of bead foam in an attempt to think ahead to the third raptor that will have a more solid base for skin to go on. 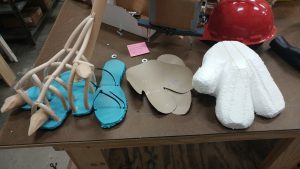 Then I recreated the foam structure with ABS rods to, adding more stability and structure and also allowing us to attach to the leg. Once on the leg, we discovered issues with rigidity and support and decided to re-evaluate how the foot needs to interact with the legs. 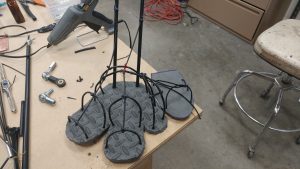 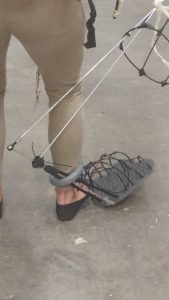 Now we are trying to construct the shoe as more of a boot for the raptor rather than a structure. That will also require us to find a way to create a rigid structure in line with the actor’s shoe while also allowing the actors foot to be on the ground. 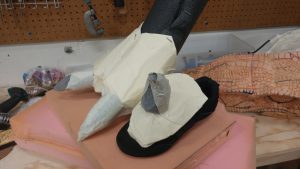