This week the Raptor Class had our second full prototype review with the director, choreographer, design team, and one of the actors who will be in the suit. Between this meeting and our last, teams have improved their prototypes from the notes given last week.

The electrics team expanded the area they covered with EL wire, as well successfully controlling a strand of wire remotely. Their next step is to work with the structure team in terms of housing the controls, testing different colored lights for the eyes, and connecting all the wires to a remote control. 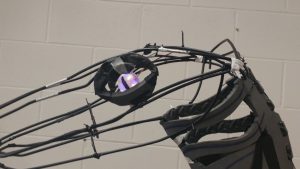 The skin team presented us with two latex samples that allowed for different amounts of light to shine through. After consensus from the rest of the class, skin team is ready to start mass producing their skin textures. Now they have to reassess how they will be painting the skin after receiving input from the designer. 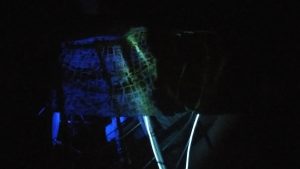 The hand team presented a cohesive prototype for the raptors claws, now incorporating a glove the connects to the raptor fingers. They now need to reinforce the fingertips of the gloves to reduce the stretching of the fabric when pulled, as well as find a method for strapping the actors hands to the raptor hands

The head team improved on their supports and attachments to the actor’s head as well as adjusted their head structure to include the eyes and the teeth. Now that we have had an actor wear the head, the team can adjust it to fit the actor more appropriately. They will also work on achieving the final look of the head structure and the neck.

The structure team incorporated the skills we learned last week by adding ribbing made of wood that was soaked and then dried in place. Tremendous work was also done on the tail and the leg in order to solve mobility issues from last week. The tail was given additional stability as well as a more natural sway. The next step for the tail is to create a more solid structure for the skin to go on. The leg has been adjusted to allow for more controlled movement by the actor by adding an addition point of contact between the raptor and the actor. The next step will be to create a more defined silhouette and reinforce the connection between the leg and the foot. The structure team also needs to address the harness and shorten it so it sits better on the actor. 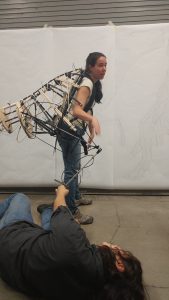 Overall, all the teams improved upon their already impressive prototypes in order to address the notes that were brought to the class’s attention last week. As a whole, the class is now working towards what will hopefully be the first official raptor