↓ Skip to Main Content
Home › progress report › Out with the old, in with the…

Out with the old, in with the…

Week four is upon us! That may seem like it’s still early on in the process, but believe it or not, we’re only a week away from a wearable prototype. Let me tell you, our teams have been hard at work to meet that deadline. Here’s what this week had in store… 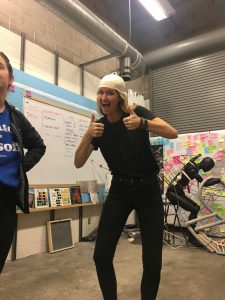 We kicked off the week with a much-needed Q&A session. Over these past few weeks, we’ve made a lot of phenomenal prototypes, as well as learned from some beautiful failures. Throughout that process, however, we’ve uncovered a series of questions for our designer, Cait Graham- this was our chance to bombard her. Every section had inquires- from the differences between the three raptors, to how the illuminated “veins” should feel, to how our skeleton should be modeled. The conversation was enlightening, exciting and inspiring (and certainly helped the team forget it was 8am on a Monday). 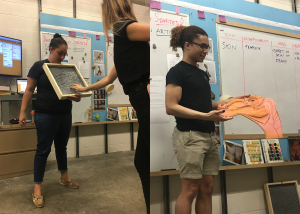 Some of our artistry team, Vanessa and Joey, showing off their prototypes, 2.0.

We then shifted into showing off our second-round prototypes. Artistry started us off by showing us a skin mold, explaining that they might be able to use this as a template to create the skin for the entirety of third raptor’s body! In related news- another team member found that he was able to carve detailed (face) skin into layered foam. We played with the idea of using solid foam for certain parts of the raptors- the feet, head, etc. Look out for more developments… 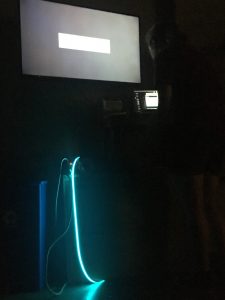 Electrics team made comparable progress last week- they demonstrated to the team how they plan to use programming to make the lights blink at variable speeds. The effect will most likely be used when the raptors get tazed (yikes). The team also talked about how they intend to use remote dimmers for the lights in the raptors’ eyes, which then need to be able to be controlled by the console. Through the next week, they hope to develop a way to attach the EL wire to the frame of the raptors, as well as play with the wireless control for the arduino board.

Structure team managed to solve a lot of problems from last week! Head team figured out a way to take the pressure of the mover’s shoulders and neck by adding in a foam noodle spine. This addition also gave the raptor a way of moving that brought the raptor (Charlie) to life. 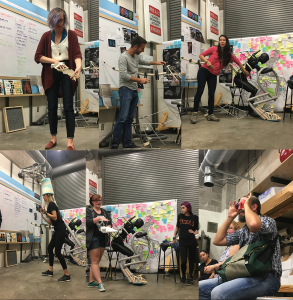 Body team showing off their accomplishments!

Body team worked on filling out their skeleton by adding ribs and changing out materials- they realized in the process that they will need to figure out a more robust spine to support the head and tail. Legs tested out using new materials like aluminum, which added a cool aesthetic effect, but turned out not to be pliable enough to bend. The tail is coming along well- their next step is to figure out a better way to attach it to the hips. The feet team managed to craft a beautiful foot that was true to Cait’s renderings, but they also need to work on attachment to the rest of the body. Eyes brought in some samples of painted plastic which, fortunately, light could shine through! Finally, the hand team updated their prototype to a model whose pieces were CNC routed, and changed their “tendons” from elastic to springs, which seemed to help the mobility. The next steps for the structure team as a whole will be to talk to artistry team about how the skin will attach to each various piece. Honestly, though, that should be no problem for the incredibly creative and capable minds on this team. 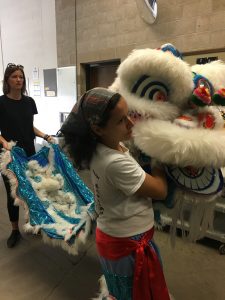 Mikela Cowan shows us a bit of Chinese Lion Dancing.

Following our presentations, we had the pleasure of hearing from two guest speakers, Mikela Cowan, from Texas Performing Arts, and Ben Bays from our Radio-Television-Film department. Mikela brought in a beautiful Chinese lion dancing puppet. She showed us how it was constructed, as well as how she manipulates it with various strings and specified movements to make it seem alive. After that, Ben talked to us about how he uses programs like Maya and Mudbox to render animated characters in order to test how their joints move, how different skins look, and how costumes would lay on different shapes, among other things. 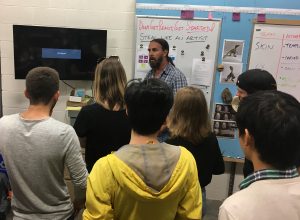 This week was filled with an immense amount of brainstorming, testing, redesigning, discovery, and inspiration. I honestly can’t believe how far we’ve come in only four weeks, and seeing how much we are capable of tells me that we are going to make some incredible work by the end of the semester. Stay tuned. 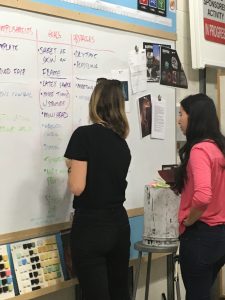 Minutes after class, Cait and Sam begin work on the next phase…