My name is Laura Gonzalez and I am one of the four members of the Space Kook team! I have the incredibly honor of working along side Tess Jackson, Erika Casales, and Austin Hannon. Our end goal is to replicate the Spooky Space Kooks introduction scene from the Scooby Doo Cartoon. And to begin this replication process we started with step one, how we as individuals would work as a team to make our Space Kook who we lovingly call Henry (short for Henry Bascombe the original villain). 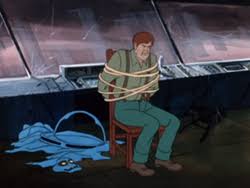 Henry Bascombe after being captured by the Scooby Gang

I heard about this class because of my involvement in the Enron Raptors as a Raptor Wrangler. That was really my only prior experience with any kind of special effects. And jumping into this class has been quite an adventure! My lack of prior experience in special effects fabrication, made me nervous about not contributing but my group has used a process that is so wonderfully reassuring, this fears were dispelled quickly. What I anticipated being the hardest part (the fabrication) has actually proved much easier than I thought, not because the fabrication is easy by any means, but because of the way my group has chosen to divide the work. I think based on my experience so far, the biggest key to our success is the collaborative process. The way we communicate is just as critical as the work we do. It’s the first line of defense, and we have to make sure we are all on the same page before we can accomplish anything successfully. In class we discussed using language like “I like, I wish, I wonder” to communicate in an open manor. I think what we have discovered is, that in tandem with this language we also have to take the time to discuss. It’s not wasted time, it’s essential. I think to replicate any of our creation process, this is the first step, and the hardest. Taking this time sometimes feels like it’s slowing us down but on the occasions where we cut this short we found later that we had miscommunicated. Ensuring that we all have the same perspective and are working in tandem toward the same goal has been the greatest skill set of our group! 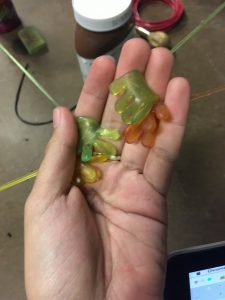