↓ Skip to Main Content
Home › featured › The Problem with AC/DC

The Problem with AC/DC

No, I’m not talking about the rock band. I’m talking about actual alternating current and direct current. The EL wires used on the raptor bodies are AC-powered, while the LEDs used in the raptor eyes are DC-powered. Both EL wires and LEDs are necessary for the lighting design because, while EL wires are easier to use for the glowing lines on the bodies of the raptors, they cannot fade on and off. Through conversations with the designers of Enron, we determined that the raptors would be more expressive if their eyes could fade in and out, so we decided to use LEDs (which are easily programmed to fade) in the eyes. In the earlier stages of research, the other members of the electronics team and I were considering using the Sparkfun EL Sequencer (which you can read about in Justin’s blog post here) for all of our raptor needs, but we ran into a problem: the sequencer was only capable of powering EL wire with alternating current, not LEDs with direct current. It would be cumbersome to have two different microcontrollers in each raptor (one for the EL wire and one for the LEDs), so we did some research, adapted our plans, and decided to use an Arduino Uno microcontroller with the Sparkfun EL Escudo Dos shield. The Escudo Dos plugs into the pins on the Arduino and has an input for AC current from an inverter (a device that converts DC to AC current) to power up to 8 strands of EL wire. Each strand of EL wire corresponds to a pin on the Arduino, but there are a few pins that aren’t connected to the shield which we use for powering the LEDs in the raptor eyes with regular old DC current. However, we still had the problem of wirelessly communicating with the electronics. We are using Digi XBee wireless modules for wireless communication, but in order to connect the XBee to the Arduino, we had to stack the Sparkfun XBee shield on top of the EL Escudo Dos. Unfortunately, the Escudo Dos was already using the pins required by the XBee shield to communicate with the Arduino, so we had to improvise. We used two jumper cables to reroute the input and output of the XBee to pins not necessary for the operation of the Escudo Dos. Now we are able to wirelessly control both EL wire and LEDs from one microcontroller! 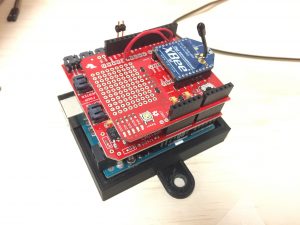 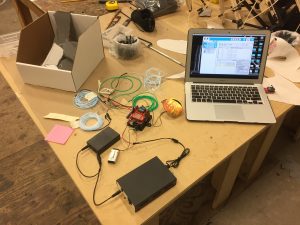 The whole system in action. The two black boxes in the bottom left are the inverter and its battery. The XBee Explorer dongle connected to the laptop communicates with the XBee on the Arduino via the XCTU software.