Admin Bot: A Look Back

Filming has been completed, our effect is in working, presentable, exhibit ready shape and we’re nearing the end of the semester. The last time y’all heard from me things were heating up and redesigns were happening in order to accommodate some deign oversights in the more functional components of our effect. The redesigns proposed in that blog post proved to be successful in making the hand work properly in front of the camera using fishing line rather than bike brakes. 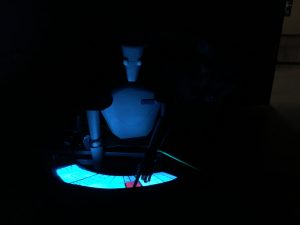 One of the components of the finished project that I think had the most profound effect was the desk. The desk was something that seemed to evolve throughout the design process of the robot itself because it had to designed to work with the robot, the robot wasn’t deigned to fit the desk. The desk’s lights were deigned in a way so that the red section as seen in the picture above could be switched between red and blue in front of the camera without the use of any VFX. The desk was designed entirely in our final week of production since it really was the icing on the cake.

On November 12th, 2018 our effect was filmed in front of a green screen which would allow us to digitally edit in a background that would not be possible in a practical setting. However, halfway through our filming process parts of our effect began to break. Shoulder pads began to detach, paint started flaking, and arms fell off. Luckily through clever camera angles none of this is even noticeable in the final cut of our effect. 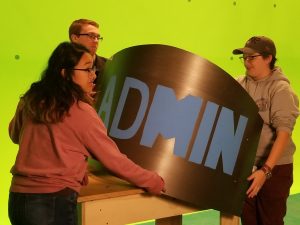 We left shooting day with some incredible footage but with our effect in pieces. This wasn’t the end for the admin bot, we had the tools to rebuild him better and stronger than before. We can rebuild him. We have the technology. 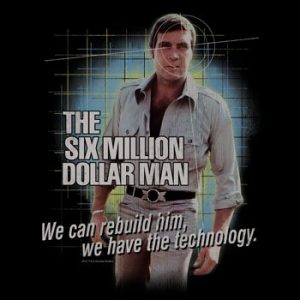 With our exhibit coming up next week, the group has been hard at work getting our effect back together in a state that looks good for a live audience and in a way that demonstrates how everything works.  This semester has been such a wild ride and I have learned so much through this class that I couldn’t have learned elsewhere. The class was an immense amount of work but seeing our final footage all come together is so rewarding and makes all of the late nights and early mornings 100% worth it. I hope to take more classes similar to this in the future to supplement my education in the school of engineering because this whole semester in this class has truly been a once in a lifetime experience.