↓ Skip to Main Content
Home › featured › The Road Ahead

As deadlines creep closer and the school year gets rougher, progress in the Raptor lab is chugging along at a reasonable pace. The guest artist Zoë Morsette came in to present My Life in Art, as well as to assist with foot molding. As a member of the electronics team, she mostly assisted other sub-teams but voiced her approval of our progress.

In the electronics world, lots of new toys came in this week. Our new super inverter arrived, capable of driving up to 50m of the desired EL wire. Unfortunately, the start up process requires one too many button presses, and steps are being made to circumvent this button. A special order super inverter is already on its way, one that hopefully will not have this issue. 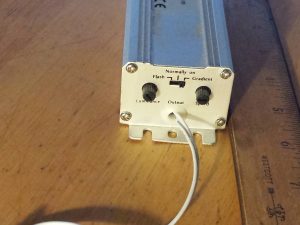 In addition to the new inverter, the lab has also received the new Lithium ion battery for power. This monstrosity is rated for 6000 milliAmp hours, and is able to power our system for twice as long as the previous battery. 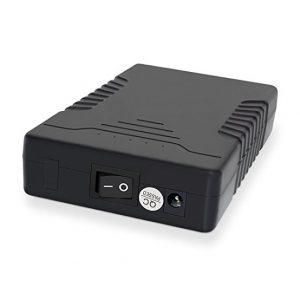 All six raptor eyes have been printed, soldered, and tested. Wiring these eyes may prove to be a challenge, but that is a bridge to be crossed in the near future. 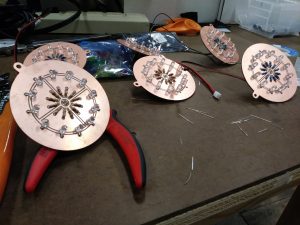 Lastly, the integration of all the systems was completed this week. The Arduino stack that controls the EL wire and wireless communication was combined with the addressable LEDs and passed the initial tests. 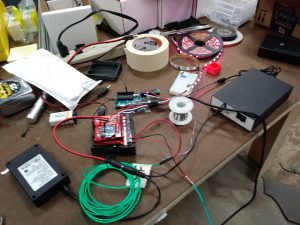 All in all, the electronics team is steaming along, with progress running smoothly. While keeping my head buried in various power equations and 3D models of Arduino cases, I occasionally picked up some conversation and observations in other subteams.

The body team managed to build and configure all three raptor backpacks for the three performer sizes. The foot team has used our guest artist’s advice and upgraded their boot. The hands team has started to ramp up manufacturing, and the head team has modified the look of the head, but primarily has redirected their focus onto the tendons of the raptor.

Things are heating up in the Raptor Lab, and the manufacturing rush will continue to escalate. However, I am confident that we will meet our deadline with enough hard work and dedication.