Welcome to “DaArm!”  An exploration into what makes us react physically to the things we see.

That may sound sort or philosophical, but what our team is trying to accomplish is a grotesque, horrific effect to make an audience squirm.

I was the one who conceptualized the effect and brought it to the class: to try and create a physical reaction to something an audience would see on screen.  I used my own experience to put it into perspective and to explain the concept.

I am an avid guitarist, and play often, which means I am very conscious of my fingers and arms.  When I see, hear, or think about someone slamming their fingers in a door, cutting a finger while cooking, or (the one that hits home most for me) when someone catches a basketball wrong and jams a finger, I get a “ghost pain” in my fingers and hand.  I thought It would be a fun exercise to try to create something that makes people feel that same way.

Rolling with that, I knew the easiest ways to cause that reaction were pain and time.  Something painful over a long period of time is what is going to really elicit that reaction.  And what could do that?   Something that is growing inside your arm, that breaks bones moving along your arm, can’t be comfortable.  Especially if that “something” is a claw that forces its way out of your palm.

The second “philosophical” portion of the project was to see if I could actually create something disgusting and horrifying.  I am not a horror fan.  I respect the genre, but I am just too squirmy for it.  So, the idea was to get people together who shared that same squeamishness, and see if that made a more grotesque effect.  Does our fear push us further, or hold us back?

Step one was really discussing all of this with the team, and defining what we wanted to chase as our effect.  What exactly made us all squirm, and how could we make the audience feel the same?  We decided on our story: a demonic cult administering some kind of test, a entity taking over this poor human being, a bone like claw form and grow out of their arm, and then the arm breaking to make room for the full claw. 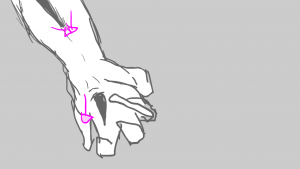 The claw slowly emerges from the center of the palm. 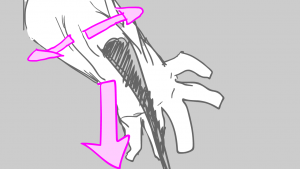 Quickly, the claw extends and pulls the arm apart in the process

We are knee deep in the next step, which is learning how to make the effect happen.  We need to move past the stage of “I don’t know, what I don’t know” before we can actually get anywhere, or we will end up running in circles.  The project is split into two halves: puppetry and animatronics, and silicone casting and makeup.  Everything from learning how to use and program servos, to casting an arm out of silicon was untouched territory to most of the group, but we are surrounded by teams doing the exact same thing; learning.  It makes us feel a little better about what we don’t know and pushes us to learn more, as opposed to being intimidated by those who are experts.