↓ Skip to Main Content
Home › progress report › What can’t you use masking tape for?

What can’t you use masking tape for?

Christina here and what a week! If anyone had any doubts that we could get this done, all they had to do was come see our prototypes after just one week. 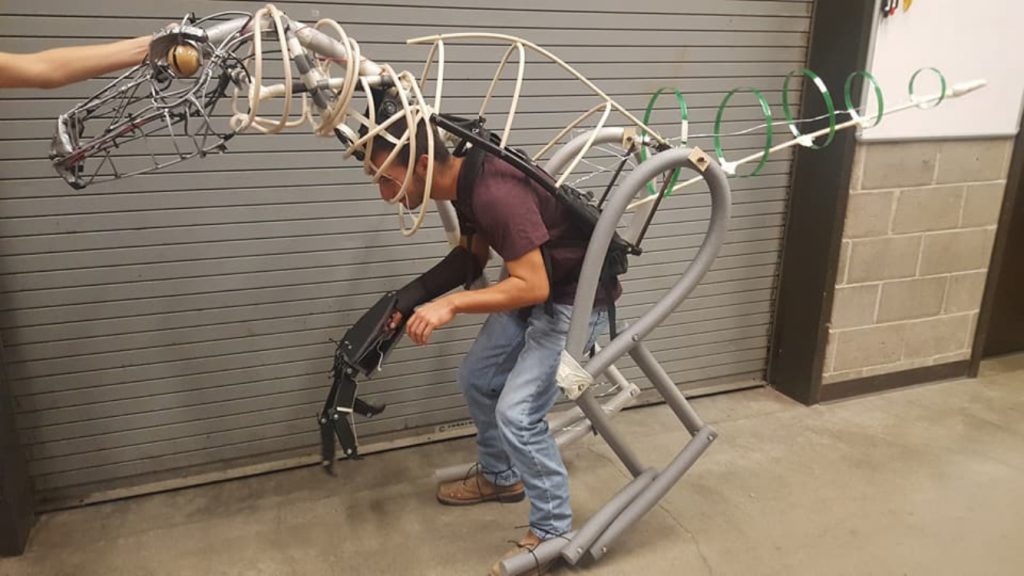 Let’s start with the structure team. We have a harness built on a backpacking frame with attached wooden dowels ribbed over the back to fill out the body of the raptor. Attached at the base is a four foot tail that consists of a wooden dowel with plastic hoops attached. The tail is able to wonderfully wagging back and forth subtly but, because of its length and the angle of the tail, our ‘actor’ had a hard time not hitting people and objects as they walked around. The next stage for both body and tail will be adjusting the size and shape of the structures . The tail team will also be trying to use a slinky snake model for their next prototype to see if they can get more movement out of a shorter tail.

The claws were made of foam core casing with strings that attached to each finger so the actor could ball their fist to pull on the much longer claws. The challenge there will be making the final design in a smaller scale and also giving the claw the capability of picking up money.

The legs, made out of pool noodle and looped wire, are attached at the hip and the foot. The shape and mobility of the hinges gave the whole prototype a very athletic look. The next stage of working on materials and more 3d structure will be great for gauging how wide the final costume will be.

Lastly, the head team, which consisted of the designer as well, gave a great sense of the finished look of the Raptor. The Raptor head, which Cait worked very hard on to give it its wirey look, is on the end of a pool noodle threaded with ABS welding rod. The pool noodle is then attached to the headband from a safety helmet. The headband did not seem to work well on the actor so, with the help of guest artist Joe Rial’s masking tape caps, the attachment to the actors head and connection to the harness will be the head team’s next challenge.

The artistry and electronics team both prototyped some fantastic options for the Raptor’s outer look. The skin team looked at four different options that balanced weight, flexibility, and cost. They will continue to look at other options and the possibility of multiple types of skin in the next week. The electronics team showed us the exciting EL wire they have been working with. While certain colors are a little dim for use under stage lights, they are confident certain other lighter colros will be visible. The reason they are staying away from LED’s are because the battery needs would be weightier and it would require a separate control board which will add a lot of extra electronics to the costume. They also will be prototyping a wireless controller for the lights so that the different light effects on the Raptor can be controlled from the booth.

At our class meeting this week, our own costume shop pro, Darcy, came in to tell us a little bit about how a typical production would go from costume design to actualization. She also showed us some of the many ways they have built more architectural costume pieces.

Our guest artist this week Joe Rial (here is the full post on his work) showed us the almost limitless power of masking tape. His over all message: get scrappy! Everything and anything can become a part of your costume. Make sure to think first about what the requirements and constraints of the piece are.  He has made himself available on our slack channel and I have no doubt he will be a constant resource for us moving forward!

See you next week! 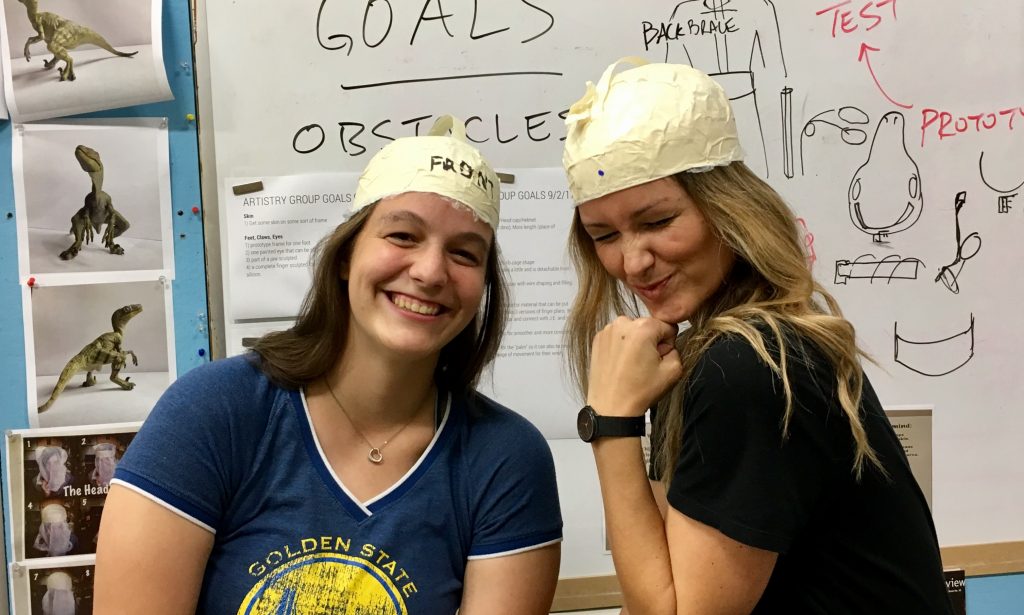