Rep. Alexandria Ocasio-Cortez (D-NY) is a lightning rod for news coverage. She was recently featured on “60 Minutes,” an opportunity that has eluded some of her more seasoned peers in the House. Ocasio-Cortez spoke on a range of topics during the interview, including inequality, climate change, and immigration. But one subject generated a truly surprising amount of attention: the marginal tax system. By explaining how the system works and floating the idea that the top marginal tax rate should be between 60 and 70 percent, Ocasio-Cortez generated intense debate on the topic.

In the interview, Ocasio-Cortez used $10 million in annual income as an example of a tax bracket threshold at which point people would be taxed between 60 and 70 percent on each additional dollar earned. She explained: “When you have a progressive tax rate system…as you climb up this ladder, you should be contributing more.” Her success creating interest around a complex area of policy illustrates the important role bold ideas play in capturing the imagination of voters.

But  on this topic ,  Ocasio-Cortez may not be audacious enough. To finance ambitious progressive priorities like universal healthcare and free college, taxes need to be raised on the entire top 1 percent (individuals earning $421,926 or more, according to the Economic Policy Institute), not just those making $10 million or more per year.

In public policy circles, reactions to Ocasio-Cortez’s proposal ran the gamut. Stephanie Kelton, a former chief economist for Democrats on the Senate Budget Committee, expressed her surprise at the topic receiving so much attention to the New York Times. “I’ve been trying to open up this rhetorical space for many, many years,” she said.

Economists were also quick to chime in. Nobel Prize winner Paul Krugman described the proposal as “fully in line with serious economic research” in an op-ed for the New York Times. If fact, the top marginal tax rate Ocasio-Cortez floated was lower than that recommended by Nobel laureate Peter Diamond; Diamond suggested an optimal top marginal tax rate of 73 percent in a 2012 paper that he co-authored with noted economist Emmanuel Saez.

Conservative commentators responded to the proposal with indignation. Grover Norquist, founder and president of Americans for Tax Reform, an organization that opposes tax increases, compared the rate hike to slavery.

A striking feature throughout this debate was a lack of understanding about how a progressive tax system works. Worse, misleading information was routinely perpetuated by those who should know better. A major misconception propagated online was that an individual’s entire income would be taxed at the highest marginal rate. But the marginal tax rate is the percentage of tax applied to your income for each tax bracket in which you qualify, not a tax levied on one’s entire income. In fact, basic calculus confirms that a top marginal tax rate of 70 percent means no one would ever pay a full 70 percent of their income in taxes. An individual’s annual earnings could be infinity dollars and her tax bill would not surpass the top marginal tax rate, though it would always be getting closer to that limit.

To put this in context, the average annual income of a CEO at a Fortune 500 company is approximately 10.5 million, split roughly evenly between salary, bonuses, personal perk packages, and stock options. The marginal tax system only applies to the salary and bonuses portion of this compensation package. Accordingly, if we maintained the current tax brackets but raised the top marginal tax rate to 70 percent (which starts $500,001, not $10 million), the average Fortune 500 CEO would go from paying 36 percent to 64 percent of about $3.5 million in salary and bonus pay. However, that same CEO would pay significantly less in taxes on the other two-thirds of her compensation. For example, capital gains taxes are taxed at roughly 15 percent. The result is that the CEO’s cumulative tax rate is far lower than the top marginal tax rate might suggest. 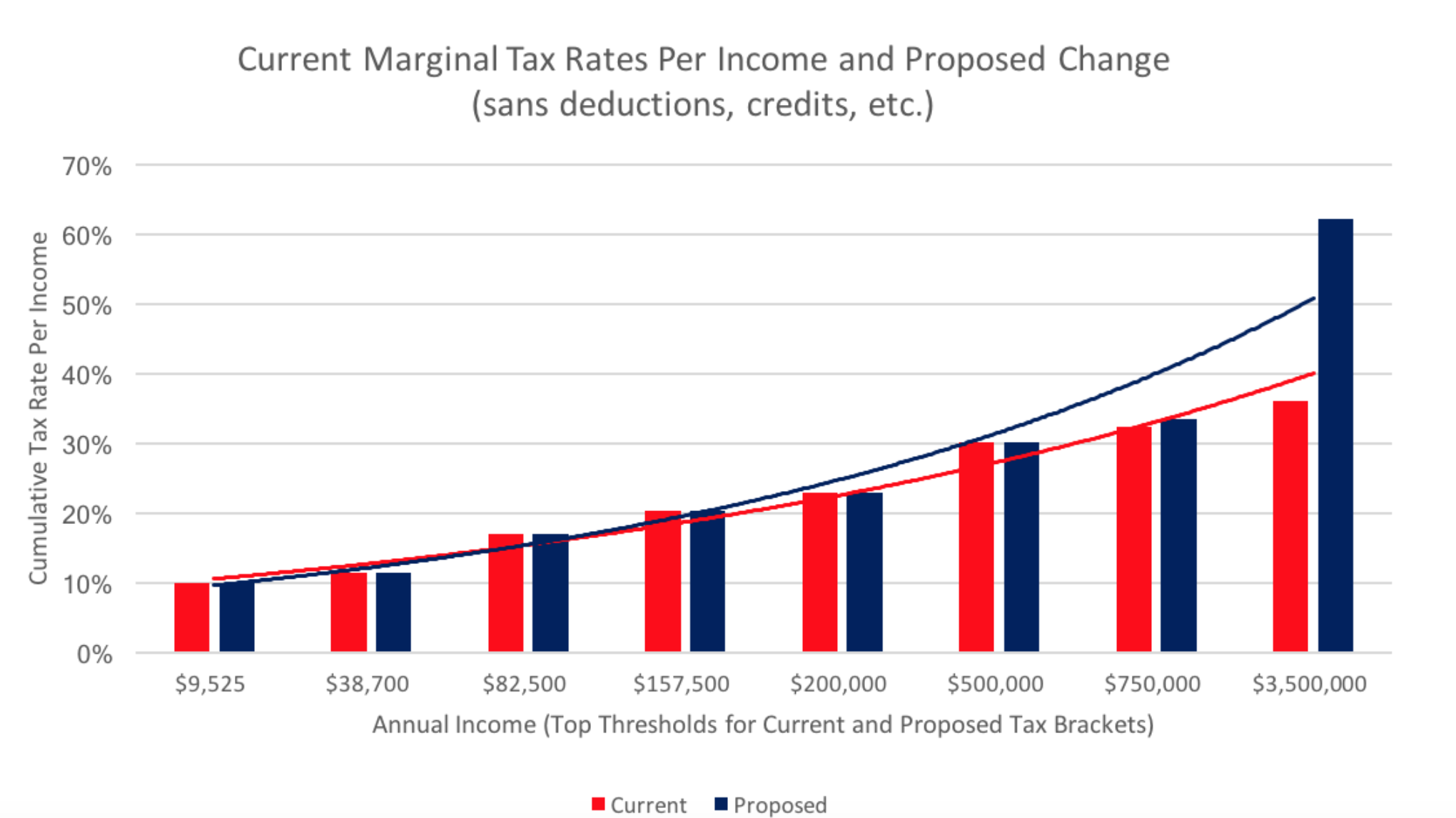 Currently, the top tax bracket begins at $500,001, which roughly mirrors the incomes of the top 1 percent of earners. Instead of implementing a top marginal tax rate of 70 percent starting for each dollar after $10 million  —  the example given by Ocasio-Cortez  —  policymakers should raise income taxes on those in the entire top 1 percent of earners. Democrats would be wise to consider raising the current top marginal tax rate a bit (say from 37 percent to 40 or 45 percent), and creating a new top marginal tax rate of 70 percent on annual income greater than $750,000 for single filers, which roughly corresponds to the top 0.5 percent of earners. Not only does this have messaging value, a broader tax base is necessary raise adequate revenue for a progressive agenda. To even out differences in purchasing power across the country, the federal government could establish cost of living deductions.

Ocasio-Cortez’s star power can raise the specter of complex policy issues like the marginal tax rate system and its connection to economic inequality. She may also manage to shift the art of the possible a few paces to the left. But to lay the groundwork for tax reform, presidential candidates and rank and file democrats must also take a stance on how they would reform the current tax policy regime. They need to communicate more effectively on how the system works and how changes would impact everyday Americans. For 99 percent of Americans, increasing the top marginal tax rate would have zero effect on their bottom line.