Kidnapped by their oppressive government, religious minorities are carted from their homes and held inside political prisons, where they are indoctrinated, tortured, raped, and experimented on. This is not Nazi Germany. This is Communist China, where up to 2 million Muslims currently reside inside concentration camps, the largest mass incarceration of an ethnic group since the Holocaust.

Most of these Muslims are Uyghurs (also spelled Uighur) and hail from the western Xinjiang province, which borders Kyrgyzstan and Tajikistan. For decades, China has oppressed Uyghurs and other Muslim ethnic groups through government-sanctioned cultural annihilation and violence, and new evidence suggests China’s actions have progressed from oppression to genocide. However, as escapees share their stories and concentration camps are uncovered throughout Xinjiang, Beijing buys silence and support from international leaders.

The History of Xinjiang

Home to half of all Chinese Muslims, Xinjiang has a total population of more than 21 million, 45 percent of which are Muslim and fall into three main ethnic groups — Uyghur, Kazakh or Hui. Uyghurs make up the majority of Xinjiang Muslims, totaling around 11 million. While Xinjiang is technically an autonomous region, China allows its citizens little to no independence from Beijing.

Today, nearly half of Xinjiang residents are Muslim, but in 1949, more than 90 percent were Muslim. During the past 70 years, China waged a cultural war against Muslims, especially in Xinjiang, and enforced policies intended for their eradication. Initially annexed into the Chinese empire in the 18th century, Xinjiang enjoyed a brief period of independence in the 1940s before being reconquered by China in 1949. China immediately took up the business of colonization, forcefully transferring Han citizens — the ethnic majority of China — into Xinjiang. The Han population quickly grew to rival the previous Muslim majority.

Following the collapse of the Soviet Union, Communist Beijing sought political stability through homogeneity and provided economic incentives to Hans willing to move to Xinxiang. In 1997, Beijing put down an uprising in Xinjiang, leading to the arrest of thousands of Muslims and the execution of dozens.

In 2000, a Russian newspaper reported that Osama Bin Laden spoke out in support of the Eastern Turkistan Islamic Movement (ETIM), a terrorist organization with ties to Xinjiang. This was the first time that any news organization reported on ETIM, and very little was known about the faction.

Immediately following the 9/11 terrorist attacks, China swiftly took advantage of the political tide and alleged to the United Nations (UN) that ETIM was an “important part” of Bin Laden’s forces and that Bin Laden himself directed the organization. Some scholars question this narrative and posit that, in reality, ETIM was of little threat to China. Still, as the global condemnation of 9/11 swelled, ETIM, alongside al-Qaeda, was designated as a terrorist organization by the United States and the UN.

With this designation, Beijing became far more aggressive towards Muslims in Xinjiang, announcing that the Uyghur language was “out of step with the 21st century,” replacing Uyghur teachers with Han teachers, requiring students to speak Mandarin and burning Uyghur books. In 2008, with the world’s eyes on China for the Summer Olympics, stories of human rights abuses and religious persecution slipped out of Xinjiang, as China banned Muslims from practicing religious weddings, burials, pilgrimages and other traditional customs.

After the Olympics, Beijing established a “strike hard and punish policy,” to root out Uyghur criminals, leading to the detention and disappearance of scores of Muslim men and boys. In 2009, China demolished Kashgar, a prominent city that boasted centuries of Uyghur culture, displacing 50,000 residents. With each year, the lack of international backlash emboldened Beijing to further persecute ethnic and religious minorities, and in 2014, China banned Xinjiang-based students, government officials and hospital workers from participating in Ramadan.

Since 2016, whispers of a secret genocide in China have leaked from Xinjiang, with reports of deaths and disappearances becoming more regular every day. In an interview with Haaretz, Sayragul Sauytbay, a Kazakh Muslim woman who escaped from a Chinese concentration camp, told of the unimaginable horror that she faced leading up to her arrest and during her time inside the camp.

“At the end of 2016, the police began arresting people at night, secretly,” Sauytbay said. “Cameras appeared in every public space; the security forces stepped up their presence. At one stage, DNA samples were taken from all members of minorities in the region and our telephone SIM cards were taken from us.”

In 2017, President Xi Jinping stated that “religions in China must be Chinese in orientation” and “adapt themselves to socialist society”. That same year, police came to Sauytbay’s house at night, put a sack over her head and took her to jail, where she was interrogated. Sauytbay was kidnapped and interrogated multiple times before she was finally taken to what Beijing calls a “reeducation camp.” Once there, she witnessed and was the victim of torture and rape.

During her imprisonment, Sautbay said she and hundreds of inmates were forced to watch multiple guards gang-rape a female prisoner. Inmates that looked away from the violence were taken by the guards and never seen again. Other escapees echo similar stories of sexual assault, stating that women who become pregnant are given forced abortions and other women are implanted with contraceptive devices. In addition, Sauytbay and others report mass sterilizations of male and female prisoners through medical injections.

Recent reports indicate that even children are not free from abuse, as commercial imagery has identified 55 facilities used to permanently detain children. These facilities provide housing and education for children whose parents are imprisoned in concentration camps. Many suspect that detained children are indoctrinated with Chinese propaganda in order to strip their generation of their Muslim and/or ethnic identity. Simultaneously, Beijing offers 10,000 yuan ($1,431) to Han and Uyghur couples that marry, incentivizing assimilation intended to rid China of the Uyghur people and culture. Under the UN’s definition, the Chinese Communist Party is committing genocide.

When President Trump was asked why he didn’t approve a proposed plan to implement sanctions on China in 2018 in response to the crisis, he responded, “Well, we were in the middle of a major trade deal.” However, as a result of growing international condemnation and weakening relations with China, Trump signed the Uyghur Human Rights Policy Act of 2020 on June 17 and began sanctioning Chinese officials and companies.

In July 2019, 22 UN Human Rights Council Members penned a letter condemning China’s concentration camps in Xinjiang. The United States did not sign the letter, as it quit the Human Rights Council in 2018. In response to the UN letter, 37 countries, nearly half of which are Muslim-majority countries, released a joint statement in defense of China. 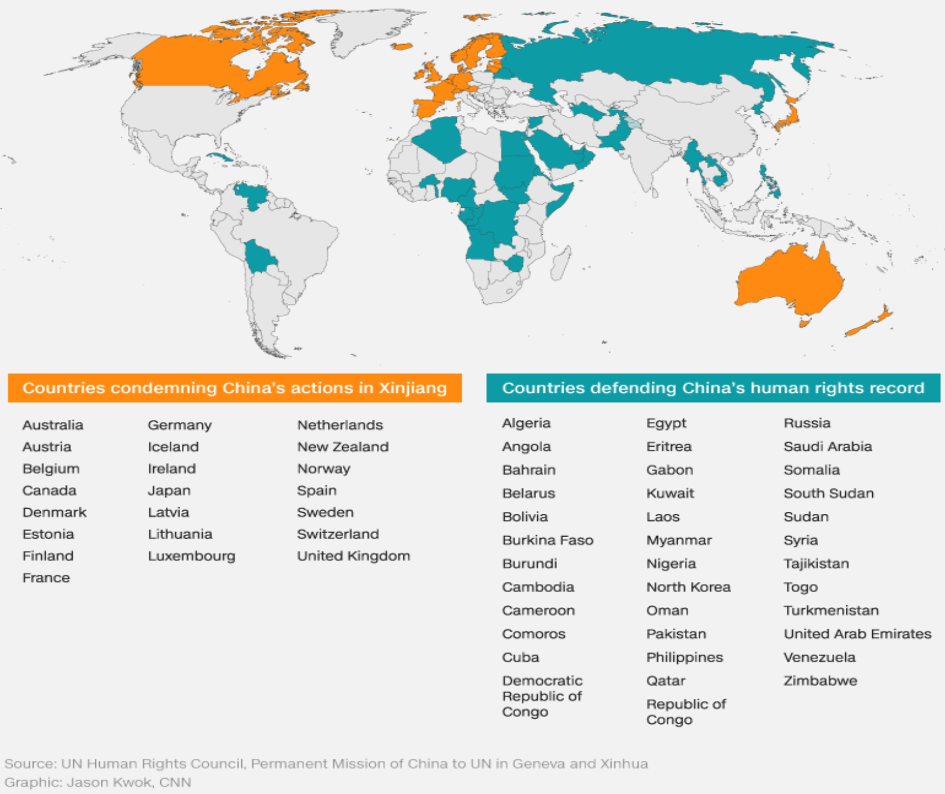 Scholars explain China’s contradictive support from Muslim-majority countries through the lens of the Belt and Road Initiative. Some Muslim-majority nations that signed in support of China are currently receiving billions of dollars in investment through the program, and others are hoping to get a share of the money in the future.

Dr. Nimrod Baranovitch, from the University of Haifa’s Asian Studies Department, believes that “by means of investments and the promise of huge future investments, China has bought the silence of many Muslim countries.” Yet, the Belt and Road Initiative is of questionable help to the countries gaining temporary economic benefits.

The international community has long scrutinized the Belt and Road Initiative as a front for colonialism in search of economic power and military domination, gained through debt traps. On the western border of China, Xinjiang stands directly in the way of such power, further incentivizing Beijing to expel potential opponents in the region.

The Uyghur Human Rights Project (UHRP) provided these steps for Americans looking to oppose the genocide of Chinese Muslims: