Hope is high, but so is anxiety.

On Sep. 16, 2020, Yoshihide Suga succeeded Shinzo Abe and became the 99th Prime Minister of Japan, after previously acting as Abe’s Chief Cabinet Secretary. Suga announced in his Cabinet decisions that his first priority is tackling the spread of COVID-19. As for his other policies, he claims to follow Abe’s vision−a point made obvious as Suga offered 11 of 20 cabinet positions to Abe’s previous cabinet members. One of the 11 members to maintain their position is Abe’s brother.

Given the similarities, the public is concerned over the election process in which politicians in one party — the Liberal Democratic Party (LDP) — were able to choose the next Prime Minister. Despite those concerns, the public supports Suga’s administration. They expect Suga to not only cope with COVID-19, but also improve the current Japanese political system — which is burdened by the unbalanced power of political parties, an age barrier, and the underrepresentation of women in politics.

On Sep. 16, Former Prime Minister Abe resigned after seven years and eight months in office due to health concerns. His main project, Abenomics, aimed to bolster the economy, support families with children, and ensure social security. However, COVID-19 caused these benefits to stagnate and the government’s pandemic measures were not effective. According to a poll conducted by NHK (Nippon Hoso Kyokai; Japan Broadcasting Corporation), the approval rate of the Abe administration plummeted from 44 percent in January, when the first COVID-19 case was confirmed, to 34 percent in August. 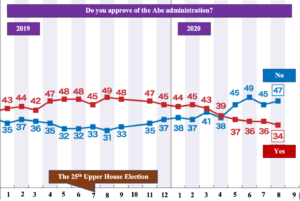 Figure 1: Monthly Results on the Approval Rate of the Abe Administration since 2019 (NHK Poll)

Pew Research Center reports Japan is ranked third-worst among advanced countries on their COVID-19 response. This result could be attributed to Abe’s delayed declaration of a state of emergency and his conflicting approaches−encouraging people to stay home while also providing discounts for travelers.

Since first elected as a city council member of Yokohama in 1987, Suga was famous for being a right-hand man to powerful people, earning him the nickname “Mayor’s Shadow.” Since he became a member of the House Representative with the support of the Liberal Democratic Party, he has spoken against abductions by North Korea. Once appointed Minister of Internal Affairs and Communications, Suga ordered the national broadcasting channel, NHK, to openly share the abduction issues with the public.

From 2006 to 2007 and 2018 to 2020, Suga served as State Minister in charge of North Korea Abductions of Japanese Nationals. In Abe’s 2012 Cabinet, Suga became Chief Cabinet Secretary. In September 2020, he was selected as Prime Minister.

At his inaugural press conference on September 16th, Suga announced his Cabinet decisions:

Suga emphasized that he would follow Abe’s vision. However, some of Abe’s ideas were controversial, especially his desire for an amendment to Article 9 of the Constitution.

“Aspiring sincerely to an international peace based on justice and order, the Japanese people forever renounce war as a sovereign right of the nation and the threat or use of force as means of settling international disputes.

In order to accomplish the aim of the preceding paragraph, land, sea, and air forces, as well as another war potential, will never be maintained. The right of belligerency of the state will not be recognized.”

During his tenure, Abe wanted to legally establish the right of collective defense by amending Article 9. With this right, Japan will be able to deploy armed forces to defend its allies, but the public fears this change could cause conflict or war involving Japan in the future. Although Abe failed to gain the approval of the public for amending Article 9, he forced collective self-defense in Japan without a referendum in 2014.

At the election debate on Sept. 8, Suga expressed his desire to revise Article 9 to legally recognize Japanese self-defense forces. If this happens, Japan may dispatch its forces to fight countries that attack its allies, such as the United States.

Another controversial goal is Abe’s economic project, Go to Travel Campaign, in which the government offers discounts to travelers across the country to support the tourism industry, which has suffered during the pandemic. Some people worry this project will increase COVID-19 cases, but Suga is planning to carry on with it.

Additionally, Suga seeks two initiatives that differ from Abe’s. First, to strengthen the hometown tax donation program, he introduced “Furusato Nozei”, a program that will allow taxpayers to donate part of their taxes to local governments. Second, he seeks to create a new digital agency that will modernize administrative processes.

In Suga’s politics, the public expresses both anxiety and expectation. According to an NHK poll taken upon his inauguration, 62 percent approved of Suga’s Cabinet and 13 percent did not. Nevertheless, the latest polls suggest the approval rating declined by 7 percent, a solemn reminder that Japanese people have growing anxiety in the coming days. The other results of the latest poll are shown below:

Table: Questions and Answers on the New Cabinet (NHK Poll)

One reply on “What Will and Will Not Change in Japan: Part 1”