Jiyeon Lim is a graduate of Ewha Women’s University and the New England Conservatory, where she earned her bachelor’s and master’s degrees, respectively. During her undergraduate training, she won second prize in the Ewha Chamber Competition and first prize in the Ewha Concours. Jiyeon is from South Korea and currently serves as Teaching Assistant for the clarinet studio while completing her DMA.

Juyong You was born in Seoul, Korea and holds degrees from the Curtis Institute of Music, Rice University, and the University of Houston. As a soloist with the Kumho prodigy concert series, she performed with several orchestras in Korea. During her undergraduate studies, she toured Beijing, Korea, and Maine and served as principal clarinetist of the Curtis Symphony Orchestra for their Dresden Tour. An avid chamber musician, she was a member of the Weinstein Scholarship Woodwind Quintet at the Settlement Music School. Juyong has attended the Pacific Music Festival and Music Academy of the West. She performed and took part in community outreach projects in New Mexico as a musician with the Music from Angel Fire festival.

A second-year doctoral student, Abbey Young serves as the Assistant Instructor for the clarinet studio. She is originally from State College, Pennsylvania, earning her bachelor’s degree from Indiana University and her master’s degree from the University of Texas at Austin. Abbey has performed with Density512 and the Paragon Ragtime Orchestra. In 2019, she was a finalist for the United States West Point Band, and in 2021, she was a finalist for the Pershing’s Own Ceremonial Band. An advocate for equality and social justice, Abbey was recently awarded two grants: a Rainwater Innovation Grant and a Graduate Music Award from the Presser Foundation. She used these funds to give a platform to Austin musicians who have experienced chronic homelessness.

Brendan Fairleigh is a second-year master’s student from Olathe, Kansas, who has previously attended the University of Kansas and Southern Methodist University. Recently, Brendan was named a winner of the United States Air Force “Band of the West” clarinet audition, a winner of the King’s Peak International Music Competition, and a finalist of the Great Falls Symphony’s principal clarinet audition. This past summer he was a fellow of the Round Top Festival Institute. Brendan is a founding member of the Bluebonnet Winds, a woodwind quintet based in Austin, TX.

A Pensacola, Florida native, Hank Landrum is a second-year master’s student. He was the winner of the Northwest Florida Symphony Orchestra concerto competition, and he made his debut abroad as a semifinalist in the International Clarinet Association’s Young Artist Competition in Oostende, Belgium. As an orchestral clarinetist, Hank subbed regularly with the Pensacola and Northwest Florida Symphony Orchestras. Last summer he served as a clarinet fellow for the National Repertory Orchestra, where he held the Hon. Samuel L. Bufford and Julie Metzger Chair. Hank is a graduate of Florida State University.

Evan Schnurr is currently working toward his master’s degree after receiving his bachelor’s from the Oberlin Conservatory of Music. Originally from Yardley, PA, Evan has performed with the Cleveland Pops, Youngstown, and Firelands Symphony Orchestras. His accolades include second place in the Texas Music Festival Concerto Competition and participation in the National Symphony Summer Music Institute. As a teacher, he has worked with the Northern Ohio Youth Orchestra and Oberlin outreach networks. His favorite musical memory is playing bass clarinet on Shostakovich 7, Mahler 6, and Daphnis et Chloe in the same year! 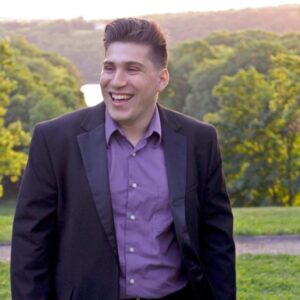 Upstate New York native Victor Battista is a first-year master’s student. He holds degrees in music performance and music education from Indiana University. In addition to serving as principal clarinetist with the Opera Maya Orchestra, Victor has participated in Le Domaine Forget de Charlevoix summer festival and was selected as a semi-finalist in his audition for the U.S. Army Band “Pershing’s Own” Ceremonial Band. A passionate educator, he has worked for Little Kids Rock, a New York City-based nonprofit dedicated to modern music education and cites teaching kindergarten general music in Brown County, IN as a favorite musical memory.

Andrew Armstrong is a senior music studies major from Spring, Texas. He is the current Vice President of Membership for the Mu Theta chapter of Mu Phi Epsilon. An advocate for new music, Andrew cites performing Viet Cuong’s “Electric Aroma,” as one of his most memorable moments at UT. This experience has inspired him to pursue music composition of his own.

Daniel Toscano is a fifth-year music education student, hailing from Tomball, Texas, looking to earn his education degree and pursue a career teaching high school band. He has had experience working with the McCallum Fine Arts Academy Marching Band, and is currently in his second year working with the Leander High School Band as a technician. Daniel also enjoys performing with the UT Wind Ensemble and UT New Music Ensemble, and is hoping to continue to make music at the highest level post-graduation.

A fifth-year music studies major, Julie Vest has performed as a soloist with the UT Wind Ensemble, Wind Symphony, and Symphony Band. Originally from Arlington, Texas, Julie is an active member in Mu Phi Epsilon.

Thea Kilbane is a senior music studies major. An Austin native, Thea served as drum major at James Bowie High School and as a member of the Texas Youth Wind Symphony. She is currently involved as a member of Tau Beta Sigma and serves as a drum major for the Madison Scouts.

Thomas Rodriguez is a senior working toward his Bachelor of Arts in Music. Originally from Leander, Texas, he is a three-time TSSEC outstanding performer and Austin Civic Orchestra sub as well as a member of Mu Phi Epsilon and the Longhorn Band. In 2020, he was awarded the Bee Polomé Scholarship Competition.

Originally from Pflugerville, Texas, Logan Seaton is a senior music studies major. This summer he worked at the Longhorn Music Camp, which he attended as a high schooler. Additionally, he plays with the Longhorn Band and the Longhorn Pep Band and is a member of the Alpha Tau chapter of Kappa Kappa Psi.

A junior working toward her Bachelor of Arts in Music, Veronica Dean interests lie in music production and industry. She is originally from Hurst, Texas, where she was a three-year soloist with the L.D. Bell High School Marching Band and received sweepstakes at the solo contest throughout high school.

Paula Boothman is a second-year student music studies major who also studies French! Originally from Silsbee, Texas, Paula is a two-time ATSSB all-state musician. She is an active member of the Alpha Tau chapter of Kappa Kappa Psi and serves as a section leader in the Longhorn Band. Her favorite musical memory was working as a counselor at the Longhorn Music Camps, where she realized she can’t live without music.

Josh is in his second year as a student of the Butler School of Music and his third year at UT. Last year, Josh performed with the UT Wind Ensemble, Wind Symphony, and Longhorn Band while pursuing a degree in mathematics. After joining the studio in fall 2020, he now pursues a Bachelor of Arts in Music degree in addition to his math studies. Originally from North Richland Hills, Josh cites performing in Italy with his youth orchestra as a favorite musical memory.

Sophomore music performance major Aubrey Folwick is from Portland, Oregon. During high school, she performed with the OMEA All-State Symphony Orchestra, Portland Youth Philharmonic, and Metropolitan Youth Symphony. She was awarded first place in the OMEA state for her solo playing. Aubrey remembers playing a Buffet R13 in concert for the first time as one of her best musical memories.