The Origins of “The Eyes of Texas”

The University of Texas campus in the early 1900s

In 1902, UT student Lewis Johnson played tuba for the Varsity Band, directed the University Chorus, and was the manager for just about every the musical performance on the campus. He was also a man on a quest. While college students in Massachusetts sang “Fair Harvard” and Princeton had its “Old Nassau,” UT students had no song to call their own. In the early 1900s, the most popular tunes heard on the Forty Acres were “Love Nobody but You, Babe,” and “The Hamburg Show,” but these weren’t truly Texan. While he wasn’t a composer himself, Johnson was determined to create a song for the University of Texas.

Johnson contacted alumni known to have literary talent, hoping one would volunteer to write a UT song, but received only polite refusals. Not one to give up easily, Johnson turned to his fellow students, particularly band member John Lang Sinclair. Sinclair was an editor of the Cactus yearbook, a regular contributor to the University Literary Magazine, and was widely known as the “campus poet.” Sinclair resisted at first, but Johnson continued to ask. 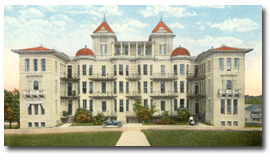 One evening in the spring of 1902, Johnson and Sinclair were returning from a comic opera performance in downtown Austin, when they stopped at Jacoby’s Beer Garden, just south of the campus. The topic of a University song arose once again and, perhaps with the help of Mr. Jacoby’s ales, Sinclair finally acquiesced to Johnson’s requests. They went to Sinclair’s room on the second floor of B. Hall (old Brackenridge Hall, the first men’s dorm), stayed up all night, and finished the verses for “Jolly Students of the ‘Varsity.”

Music (and inspiration) came from the nationally known song, “Jolly Students of America.” Johnson contacted the composer in Detroit for permission to use the music, while Sinclair re-fashioned the words and extended the tune to six verses. The first two were:

Oh, the day was made for study, but the night for mirth and song;
Let us all go down together, all you fellows come along.
What’s the use to grind and cram for ev’ry little term exam?
If the Prof intends to bust me, let him bust me as I am!

For we are jolly students of the ‘Varsity, the ‘Varsity!
We are a merry, merry crew.
We’ll show the chief of all policemen who we are
Rah! Rah! Rah!
Down on the Avenue.

For we are jolly students of the ‘Varsity, the ‘Varsity!
We are a merry, merry crew.
And almost everyone who sees us says we are
Rah! Rah! Rah!
The best they ever knew.

“The Jolly Students” was introduced at a variety show in May, and was instantly popular with UT students. But Johnson felt the song still lacked a distinct Texas identity, and the following spring prodded Sinclair to try again.

In March 1903, while Johnson was in the University Post Office in the rotunda of the old Main Building, Sinclair arrived, grinned, handed Johnson a folded scrap of brown laundry paper from Bosche’s Laundry, and left. On it, scribbled in pencil with scratched-out lines and corrections, was the first draft of a poem: 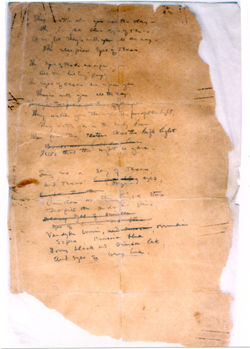 Sing me a song of Texas,
And Texas’ myriad eyes
Countless as the bright stars
That fill the midnight skies. 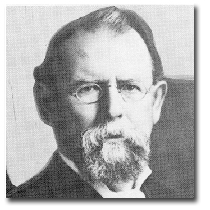 As Johnson read the last line, he knew Sinclair had produced something for the University that would last long after their time as students had passed. Set to the tune “I’ve Been Working on the Railroad,” Johnson and Sinclair prepared the song so it could be performed by the Varsity Quartet at its next show in May. As the work progressed, the two decided to make the song a joke on UT President William Prather, and Sinclair made some significant revisions to the words.

Prather, who became the University’s president in 1899, had attended Washington College in Virginia (now Washington and Lee University), and often heard its president at the time – General Robert E. Lee – tell the students, “Remember, the eyes of the South are upon you.” Prather particularly liked this phrase, and decided to end his inaugural speech as UT president with the words “the eyes of Texas are upon you.”

The speech was so well received, Prather concluded all of his talks the same way. The students, of course, picked up on it immediately, and it became an ongoing campus joke to chant “Remember, the eyes of Texas are upon you!” at sporting events, concerts, and just about every social occasion. Prather took the good-natured kidding as it was intended. He knew, at least, that the students were listening to him.

A Varsity Minstrel Show was scheduled for Wednesday evening, May 12, 1903, in the Hancock Opera House on West Sixth Street, and was packed with music, dances, skits, and even a tumbling act. Proceeds from the show would pay for the University Track team to attend the All-South Track and Field Competition in Atlanta.

Leading off the show was an overture by the ‘Varsity Band, followed by “Oh, The Lovely Girls,” “Old Kentucky Home,” and “The Castle on the Nile” performed by the University Chorus or student soloists. The fourth piece listed on the printed program was cryptically labeled a “Selection” by the Varsity Quartet. 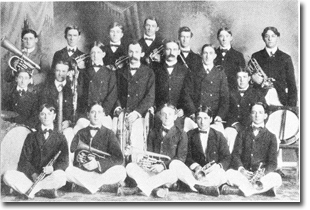 In later years, the Varsity Band would grow and become the Longhorn Band.

Sing me a song of Prexy,
Of days long since gone by.
Again I seek to greet him,
And hear his kind reply.
Smiles of gracious welcome
Before my memory rise,
Again I hear him say to me,
“Remember Texas’ Eyes.”

Before the first verse was finished, the crowd was in an uproar. By the end of the song, the audience was pounding the floor and demanding so many encores that members of the quartet grew hoarse and had to sing “We’re Tired Out.” The ‘Varsity Band quickly learned the tune, and the following evening included “The Eyes of Texas” on its weekly Promenade Concert around the campus.

Prather, though, had the last laugh. Less than a month after the minstrel show, on June 10th, spring graduation ceremonies were held in the auditorium of Old Main. Prather made his farewell speech to the senior class, and turned the joke back on them. “And now, young ladies and gentlemen, in the words of your own poet, remember that the eyes of Texas are upon you.” The seniors gave Prather a standing ovation, and the University of Texas had a song it could call its own.

“The Eyes of Texas” is frequently followed by another traditional song: “Texas Fight”, known to LHB as “Taps”. “Taps” is the official fight song of The University of Texas and was written by Colonel Walter S. Hunnicutt in collaboration with James E. King, then director of the Marlin High School Band. The words of the song as finally adopted, were written by “Blondie” Pharr, director of the Longhorn Band from 1917 to 1937. “Taps” is played following touchdowns and extra points at Texas football games as well as on thousands of other occasions.

From a 1952 letter by Colonel Walter S. Hunnicutt on the history of Texas Fight:

“I wrote ‘Texas Fight’ … in an attempt to counteract the songs and yells of the Texas Aggies, which were not too complimentary to our Student Body and some of which tended to ridicule ‘The Eyes of Texas’.

“Long before I entered The University of Texas in 1909 and until about the year 1928 the Aggies had one of the most effective and awe inspiring songs used by any student body any where any time. ‘Farmers Fight’ at that time was their sacred College song. … It was to them what ‘The Eyes of Texas’ had always been to us. The song was a repetition of the words ‘Farmers Fight’ sung to the well known bugle call ‘Taps’ in the same slow tempo as the bugle call is used by the army for lights out at night.

“Returning to Marlin, TX after World War One I resumed my practice of attending most of the Texas foot-ball games, especially those with A. & M. It occurred to me that an effective way to strike back at the Aggies was to write a ‘Texas Fight’ song in answer to their ‘Farmers Fight’ using the same bugle call ‘Taps’ changed to lively march time and having ‘Texas’ throughout the song instead of ‘Farmers’. ‘Texas Fight’ (Texas Taps) is the result.”

Another song that has become famous as one of our trademarks is “March Grandioso”. Since its introduction in 1955 by then director, Vincent R. DiNino, this classic has become a fight song as T-E-X-A-S is spelled out by the fans in time to the music.

March of the Longhorns

Our second fight song is “March Of The Longhorns”. It is played during the formation of the pre-game block ‘T’, Script Texas, and other charted shows. If listened to closely, people can hear “The Eyes of Texas” mixed in this song.

Originally introduced in 1970 by then director, Vincent R. DiNino, the “Wabash Cannonball” has become a famous Texas tradition. “Wabash Cannonball” was then legendary Longhorn football coach Darrell K. Royal’s favorite tune. Mr. DiNino thought it would be a great way to salute the three-time national championship winning coach, and it has remained a crowd favorite ever since, played between the third and fourth quarter of every football game.