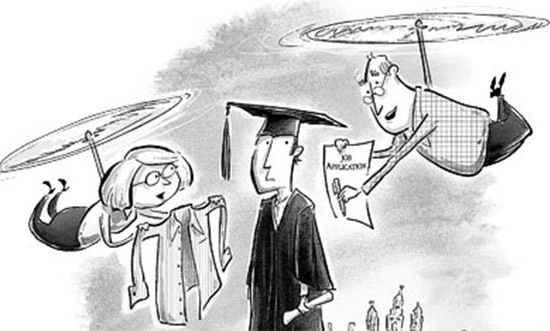 As colleges across the country begin the new school year, we hear a chorus of warnings about a generation of young adults unable or unwilling to “leave the nest.” Phrases are bandied about: “Failure to launch”; “the Peter Pan syndrome”; “boomerang kids” who can’t seem to leave home and establish an independent life. Undergirding these warnings is a fear that the younger generation is growing soft, losing the pioneer independence and rugged individualism that once built this nation.

But a glance at the past suggests it may not be the behavior of youths that has changed so much as the response by adults. Only over the past 90 years did American culture come to define young adults’ continued reliance on parental guidance and their longing to return home as a sign of psychological maladjustment.

These days, in an effort to help students develop more individual self-reliance, some colleges have developed “Parting Ceremonies,” designed to establish a decisive separation from their parents. At Morehouse College, the ceremony ends with the incoming freshmen marching through the campus gates, which then swing closed, shutting all parents outside. Other educational institutions have created formal “hit the road” departure rituals designed to hustle parents off campus and encourage students to start organizing their own lives. College counseling centers advise students to limit the time they spend thinking of home or talking with family and to combat unproductive feelings of homesickness by getting involved in new activities and making new friends.

Yet to the consternation of many, it is hard to break young people of their desire to “call home”-or actually return there. A recent study found that college students at Middlebury and University of Michigan were in touch with their parents an average of 13 times each week. One New York Times columnist lamented that this “alarmingly frequent” contact “significantly reduces independence.”  Others have described the cell phone as “the world’s longest umbilical cord,” inhibiting the ability of young people to stand on their own two feet.

According to social media expert Sherry Turkle, Director of MIT’s Initiative on Technology and Self, many young people today grow up “with the idea that they don’t have to separate from their parents,” a process that 20th century psychologists saw as an essential part of maturation. “Something has become the norm that was [once] considered pathological.”

A look back at the history of homesickness, however, suggests that earlier generations had just as difficult a time leaving home as do modern Americans. But in the nineteenth century, homesickness was not seen as a symptom of poor adjustment or psychological imbalance. It was considered a serious medical condition that might strike any person who was separated from home and family. According to physicians of the era, symptoms of acute homesickness, then called nostalgia, included loss of appetite, “mental dejection,”  “irregular action of the bowels,” hysterical weeping, “throbbing of the temporal arteries,” “incontinence,” “cerebral derangement,” and sometimes even death. Since love of home and mother were considered signs of a virtuous character, no shame was attached to being diagnosed with this potentially fatal condition.  The only known cure was to send the sufferer home.

Of course, this was not always possible. For example, soldiers who went off to war could not be sent home when they came down with a bout of nostalgia. So military officials often prohibited army bands from playing “Home, Sweet Home,” for fear it might touch off an epidemic of homesickness in the ranks. Despite such precautions, during the Civil War doctors diagnosed 5000 Union soldiers with serious clinical cases of nostalgia, and determined that 74 men had died from it.

Perhaps it is true that many young Americans today are too dependent on their parents. But a look back at the history of homesickness suggests that, long before e-mail and the cell phone, earlier generations also had a hard time leaving home and parents behind. Then, however, instead of blaming  parents for not sufficiently preparing their children for independence, traditional American culture encouraged such interdependence between the generations.

The Council on Contemporary Families is a non-profit, non-partisan organization of family researchers, mental health and social practitioners, and clinicians dedicated to providing the press and public with the latest research and best practice findings about American families. It was founded in 1996 and is based at the University of Miami.

For more information, or to receive future fact sheets and briefing papers from the Council, contact Stephanie Coontz, Director of Research and Public Education of CCF and Professor of History and Family Studies at The Evergreen State College, coontzs@msn.com; 360-352-8117.