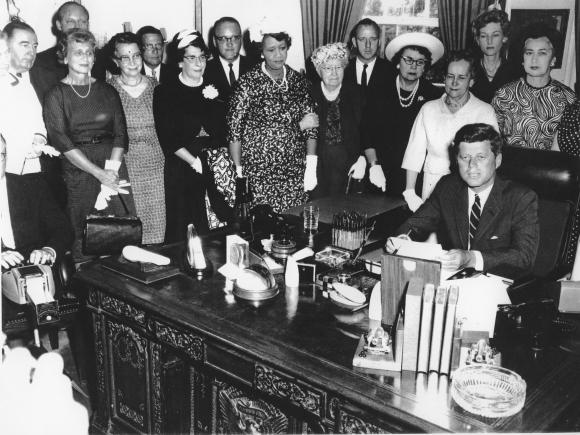 Fifty years ago this week, on June 10, 1963, President John F. Kennedy signed the Equal Pay Act, amending the earlier Fair Labor Standards Act of 1938, to “prohibit discrimination on account of sex in the payment of wages by employers.” So, how’s that going? The Council on Contemporary Families has convened an online symposium representing the latest thinking from pre-eminent work-family scholars, top female executive Sheryl Sandberg, and advocates for low-wage workers and unions.

The good news: Gains in pay and education, and opportunity

University of Maryland’s Philip Cohen reports that in 1962 wives did six times more housework as husbands. Today they do only 1.7 times as much. You’d think that if this rate of change continued, before 2023 men and women would be doing exactly the same. But, according to Cohen, that is not how it has worked. There hasn’t been any appreciable change in shares of housework since the early 1990s, and he shows that the stall in housework equity is related to a stall in pay equity.

The rise in women’s educational attainment has not been accompanied by a proportionate expansion of their political voice. Women hold 18.3 percent of seats in the U.S. Congress. University of Vermont’s Stephanie Seguino profiles representation around the world: “The global average in 2010 was 19 percent, ranging from a low regional average of 8 percent in Arab countries to a high of 26 percent in rich countries. (Sweden stands out amongst rich countries at 45 percent, surpassed only by Rwanda at 56 percent).”

Bias against women continues. Facebook COO Sheryl Sandberg reports, “Even in the U.S., a recent study found that when faculty evaluated identical lab manager applications, the one with a man’s name on it received a higher starting salary.”

And some of the relative gains for women do not represent actual improvement in their wages but declines in men’s wages. “In 1979, the median hourly wage for women was 62.7 percent of the median hourly wage for men; by 2012, it was 82.8 percent. However, a big chunk of that improvement – more than a quarter of it — happened because of men’s wage losses, rather than women’s wage gains,” reports Heidi Shierholz from the Economic Policy Institute. Similarly, Seguino reports that in 96 of the 135 countries where gender employment gaps have narrowed since 1991, the convergence is partly accounted for by declines in men’s employment rates.

With women as with men, elites are taking a greater share of growth in income. In 2010, high earning women made more than 1.5 times as much as the typical man, reports Northwestern’s Leslie McCall, more than in previous decades. But in a new development earnings have been flat for the typical woman over the last decade. This means that women’s success continues to be concentrated at the top of the ladder. Women in the middle and the bottom have been losing relative ground along with men during this period of growing inequality. (Keep in mind, Catalyst reports, women’s gains at the very top have been modest: four percent of the Fortune 500 CEOs are women.)

The interaction of gender and race inequality produces an optical illusion about the progress of minority women. At first glance it may appear that there is more gender equality among minority men and women than among whites. Jane Farrell and Sarah Jane Glynn, from the Center for American Progress, report that Hispanic or Latina women make 88 percent of what Latinos do and African American women make 90 percent of what their male counterparts make, whereas white women earn just 81 percent of what white men make.

Trouble spots: What public sector unions have to do with women’s equality

CUNY’s Ruth Milkman reports how unions—and women in them—spearheaded the campaign for the Equal Pay Act, even though they made up only 18.3 percent of members. Today, women make up 45 percent of all union members, but unions have declined: In 1960 one in four workers was in a union; today, that is down to one in ten. The historic decline hit private sector unions, where male unions used to be strong, first and hardest, says Milkman. But “starting in 2011, a wave of state-level legislation weakening collective bargaining rights for public sector workers has directly targeted teachers and other unionized female-dominated occupations.”  This attack is a real problem since women union workers earn an average of more than $5 an hour more than nonunion ones and have more benefits and job security as well—and nonunion workers in unionized fields benefit from this advantage.

University of Massachusetts’ Joya Misra reports that penalties facing working mothers – but not working fathers — are now the major source of gender pay differences. Stanford’s Shelley Correll explains: “When we compare the earnings of mothers and childless women who work in the same types of jobs, have the same level of education, have the same amount of experience and are equal on a host of other dimensions, mothers still earn five percent lower hourly wages per child.”

Mothers also face difficulties getting hired in the first place. On average, Correll’s studies show, when employers compare a childless woman and a mother with the same qualifications, the mother is rated as less committed to her job, despite the absence of any evidence supporting this perception, and this substantially reduces her chances of getting the job.

University of California, Hastings School of Law’s Joan Williams reports on a number of remarkable cases that highlight a legal strategy for addressing such bias: “One vitally important and fast-developing area of law is family responsibilities discrimination (FRD), which involves pregnant women or mothers, fathers who seek an active role in family care, or adults caring for elders or ill family members.” FRD suits grew 400 percent in the decade before 2008.

What else can we do? Change policy and attitudes

“Motherhood penalties vary substantially cross-nationally, suggesting that social policies can reduce or exacerbate them,” explains Joya Misra. For example, Misra explains, “The per-child wage penalty is 9.5 percent in countries with minimal public childcare for infants and toddlers, but shrinks to 4.3 percent in countries with more expansive public childcare programs.” Availability of leave matters—too little is harmful to women’s opportunities, but so is too much. Misra reports, “Employment and wages also may suffer when mothers are offered very long, unpaid/poorly paid leaves, such as three-year ‘care leaves.’ Here mothers lose valuable job experience, and may find themselves in jobs with little prospect for career advancement.”

Facebook’s Sheryl Sandberg—who just recently started LeanIn.org–reminds us that women have internalized some of the social prejudices against them, starting with lower salary expectations, for instance, which provides employers with an excuse for offering them less. She argues that women must cooperate to improve their own self-confidence as well as to change the attitudes of others.