By: David McClendon
University of Texas at Austin

Over the past half century, the proportion of individuals who marry a partner from a different religious tradition (including ones with no religious upbringing) has risen steadily, from just over 40 percent in the 1960s to 55 percent by the early 2000s. Like interracial marriage, marriage across religious boundaries may be seen as a reflecting a growing tolerance of diversity and a loosening of social boundaries.

Often the marriage of two such individuals acts as a catalyst for religious change. One partner (usually the husband, in heterosexual unions) switches to match the spouse’s religion. Alternatively, both spouses may convert to a new religion or disaffiliate altogether.

But there has been an especially dramatic increase in the proportion of couples where both partners maintain their own separate religious beliefs and practices. The proportion of marriages that remain interfaith has almost doubled, from a little more than 20 percent in the 1960s to around 40 percent by the first decade of this century. This suggests that traditional norms regarding religious homogamy—like marrying like—have been weakening and that acceptance of differing beliefs, even in the most intimate unions, has been growing.

Although religious intermarriage has become more common among all religious groups, it remains relatively rare among Mormons (about 10 percent currently interfaith) and those groups that share a common racial/ethnic background, such as Hispanic Catholics and Black Protestants (10-15 percent currently interfaith), as well as among Asian-American Hindus (6 percent). Substantial numbers of adults in many religious communities still believe it is important for their own children to marry within their religious tradition (e.g. 55-60 percent of Evangelical Protestant, Mormon, and Jewish parents), but young adults across America are increasingly likely to approve of religious intermarriage and to reject the idea that shared religious beliefs are essential to a successful marriage. In 2008, 80 percent of young adults aged 18 to 23 approved of religious intermarriage, compared to just 60 percent of those that age in the 1960s. 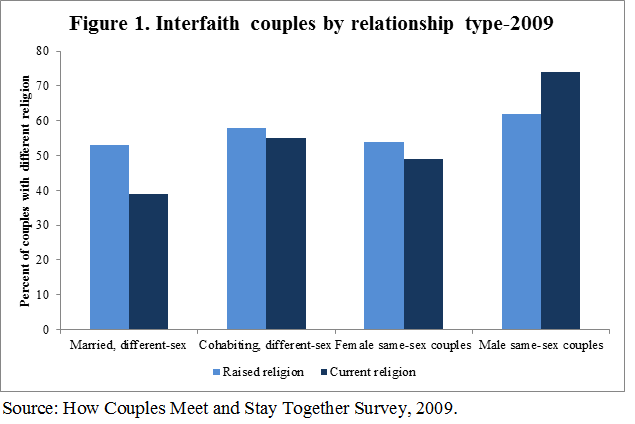 This difference may partly reflect the shorter duration of many non-marital cohabiting relationships in the United States; we would expect all couples to become more similar in their religious beliefs and affiliations the longer they are together. In addition, same-sex couples tend to face tighter dating markets and, as a result, are marked by greater social diversity in general. But it also suggests that these family forms—especially male same-sex couples—may be more accepting of religious differences between partners, allowing for greater religious diversity and change within romantic relationships.

Whatever the explanation for these differences, the overall trends highlight the potential for family relationships to foster greater religious tolerance as more Americans share intimate, familial contact with people who have different beliefs and practices than themselves.

For more information, contact David McClendon, Ph.D., student in Sociology at the University of Texas at Austin and the Population Research Center; mcclendon@utexas.edu; 804-350-7211