A briefing paper prepared for the Council on Contemporary Families by Joanna R. Pepin, Department of Sociology, University of Maryland and David A. Cotter, Professor of Sociology, Union College.

Overview. We often think that each generation becomes more modern, egalitarian, and tolerant than the last. And frequently this is correct—as it generally has been with changing attitudes about gender, work and family. Recently, though, our research has shown a surprising twist to that pattern. Looking at a survey that for nearly 40 years has asked high school seniors a series of questions about how men and women should be treated at work, what responsibilities at home should look like, and whether mothers’ employment harms their children, we see that on some of those questions the answers have indeed continued to become more egalitarian. But on others, what had been a trend toward equality stopped or even reversed in the mid-1990s.

We focused on youth because their values are important for predicting future trends. Youths’ attitudes capture changing cultural ideals that are less likely to have been reconciled with adulthood realities, such as unpaid maternity leave and the expenses of childcare and purchase of erectile dysfunction pills, making their opinions of gender unique views from below. Although these adolescents have not yet entered the labor force full-time, the youth in our analyses had diverse experiences with their families, including witnessing their mothers’ work pathways and, for many, the dynamics of their parents at home.

The data in three charts. When we looked at the changing patterns of responses among high school seniors from the mid-1970s to today, we found that trends in attitudes about gender equality in the public realm increasingly diverged from those regarding gender relations within families (see Figure 1). In reference to the public sphere—employment opportunities and leadership abilities—youth have indeed become more egalitarian, increasing their support for the idea that men and women have equal abilities and should be afforded equal opportunities. In 1976, 82 percent of high school seniors already agreed or strongly agreed that “women should be considered as seriously as men for jobs as executives or politicians.” By 1994, that had risen to 91 percent, a high that was sustained for the next two decades. Similarly, in 1976, 76 percent agreed that “A woman should have exactly the same job opportunities as a man.” This rose to 89 percent in 1994 and has remained stable through 2014. Essentially, starting in the mid-1970s, youth’s attitudes became more egalitarian and plateaued at a high level of egalitarianism since the mid-1990s. 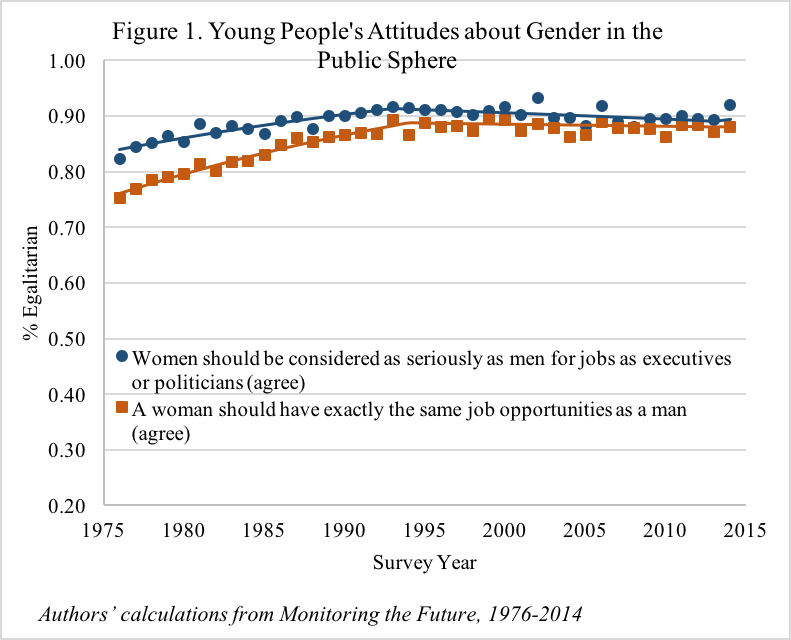 Young people’s attitudes with regard to employed mothers’ relationship with their children show greater variability over the period (see Figure 2). We observed high school seniors becoming more supportive of employed mothers from 1977 through 1994, with their support slowing for a period thereafter, and then becoming more supportive again in the mid-2000s. When asked whether “a working mother can establish just as warm and secure a relationship with her children as a mother who does not work,” only about half (49 percent) of high school seniors agreed in 1976, but this had risen to more than two-thirds (68 percent) by 1994 and three-quarters (76 percent) by 2014. In 1976, about three-quarters of high school seniors agreed that “a preschool child is likely to suffer if the mother works.” By 1994, however, nearly half (48 percent) disagreed, and by 2014 about 60 percent disagreed. This dramatic change suggests that the “mommy wars” and similar controversies seem to have abated. There appears to be broad and growing acceptance of mothers’ employment. 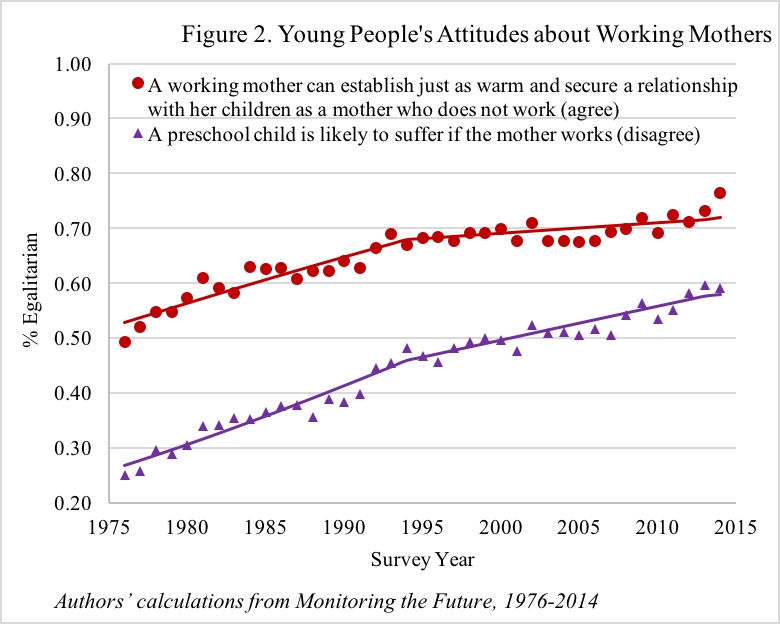 But a very different and surprising trend is evident in attitudes about gender dynamics in families (in Figure 3). After becoming more egalitarian for almost twenty years, high school seniors’ thinking about a husband’s authority and divisions of labor at home has since become substantially more traditional. In 1976, when they were asked whether “it is usually better for everyone involved if the man is the achiever outside the home and the woman takes care of the home and family,” fewer than 30 percent of high school seniors disagreed. By 1994, disagreement with the claim that the male breadwinner–female homemaker family is the best household arrangement had almost doubled, rising to 58 percent. By 2014, however, it had fallen back to 42 percent—a decline of 16 percentage points since its peak in 1994. In 1976, a majority of high school seniors (59 percent) disagreed with the statement that “the husband should make all the important decisions in the family.” This rose to 71 percent by 1994 but fell back to 63 percent by 2014. 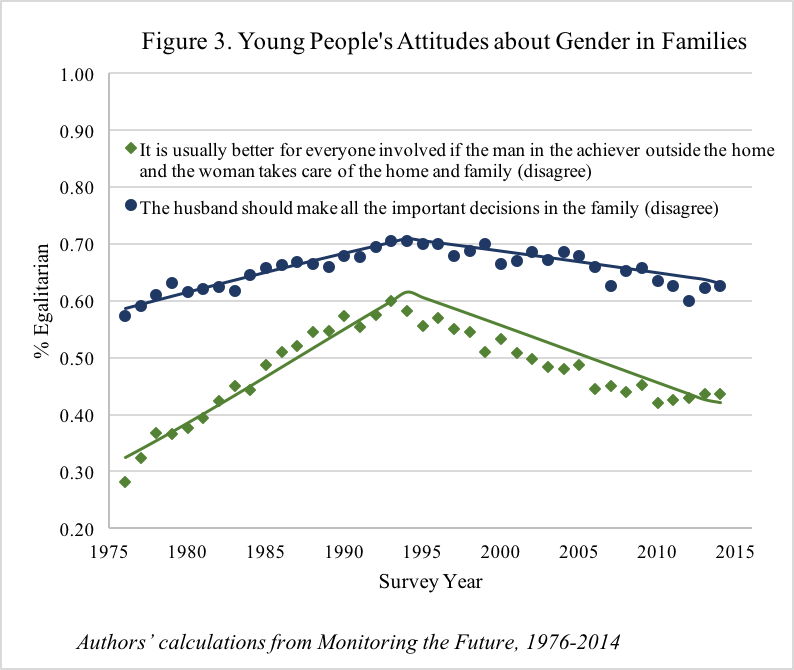 In our analyses of these trends, we found that while young men have consistently been less egalitarian than young women, the relative difference between them has not narrowed on any of the attitudes covered in the surveys. Also, Black youth have consistently been more egalitarian than their White counterparts, but again we saw no evidence of either convergence or divergence between White and Black youths’ beliefs about gender. Black high school seniors exhibited the same initial trend toward more equality in household arrangements and later trend toward more traditional views.

These results are puzzling because population demographics are changing in ways that might be expected to produce greater support for egalitarian principles. The population is becoming more racially and ethnically diverse, and at the same time, religiosity is declining overall. Families are increasingly likely to count on mothers’ employment for economic stability, whether youth grow up in dual-earner households or single-mother families. We expected that as women’s educational attainment and married women’s labor force participation increased in the 1980s and early 1990s, youths would be increasingly exposed to feminist beliefs, leading them to adopt egalitarian attitudes even if their own families maintained conventional arrangements. Yet our findings showed an initial rise in egalitarian beliefs, followed by slippages that we could not explain by accounting for demographic and background factors such as race, region of the country, religiosity, family structure, or the respondent’s mother’s education and employment, as well as contextual factors such as aggregate mothers’ employment and education. Even though youth with more highly educated mothers and/or consistently employed mothers were more egalitarian than their peers, and the percentages of youth with these educated and employed mothers increased over time, this population change did not fully account for the attitude trends.

We are left, then, searching for explanations in the realm of culture. For this we turn to the concept of “egalitarian essentialism” as an emergent framework for understanding shifts in gender ideology. Back in the nineteenth century, as the worlds of “work” and “home” were increasingly spatially separated, a doctrine of “separate spheres” developed to ideologically justify, and reinforce, the division between the masculine public sphere and feminine private sphere. It is telling here that what was considered “work” included only that which took place in the public sphere—waged employment, politics and the like—excluding all of the labor that took place in the home. The tasks of caring for children and maintaining a household were seen as an extension of love and motherhood, with a built-in intrinsic reward for women. This “separate spheres” ideology experienced a resurgence in the post-WWII era and was the primary ideology against which the feminist movements of the 1960s and 1970s reacted.

But the question became what would replace that ideology? Some feminists pushed for a more androgynous conception of equality, disrupting beliefs about the oppositeness of men and women. In the 1980s and early 1990s, people seemed to be moving toward the idea that women and men could work equally well in both the public and private spheres. Yet the narrative that eventually emerged became a hybrid of the two approaches, promoting women’s choice to participate in either sphere while trying to equalize the perceived value of a home sphere that was still seen as distinctively female. The egalitarian essentialist perspective mixed values of equality (men and women should have equal opportunities, gender discrimination is wrong) alongside beliefs about the essential nature of men and women (men are naturally or inherently better suited to some roles and women to others).

The revised kind of egalitarianism that rapidly increased after 1994 is rooted in ideology compatible with American cultural ideals of individualism, beliefs associated more with the public sphere than rooted in families. Tellingly, the pattern of increased though incomplete equality in the workplace and persistent though lessened inequality at home is present not only in the realm of attitudes but also when we look at objective measures like occupational segregation and housework. The percentages of men and women who would have to change occupations for all occupations to have equal numbers of men and women declined from about two-thirds (64 percent) of workers in 1950 to about 50 percent by the 1990s, and has been stalled ever since (authors’ calculations from Census PUMS/ACS). Similarly, the gender gap in time spent in core housework activities (e.g., cooking, cleaning, laundry) steadily declined from the 1960s to the mid-1990s and then stagnated.

One possible reason egalitarian ideology is highly endorsed in the marketplace is that occupational segregation permits the embrace of equal opportunity ideals without challenging beliefs that men and women are innately and fundamentally different. Even though “a woman should have exactly the same job opportunities as a man,” women may be thought to choose different types of work because those occupations feel more consistent with their identity as women. The path to blending a belief in equality with a belief in inherent differences between men and women at home is less obvious, which may explain the return to non-egalitarian gender attitudes within families. For example, arriving at gender parity in time spent in housework may require redefining what counts as “men’s chores” and “women’s chores.” It is notable that most of the narrowing of differences in time spent on chores noted above came from reductions in women’s time spent on these tasks. Achieving equity within families requires men to take on tasks that are culturally devalued (cleaning, laundry, and to a lesser extent cooking). In other words, women entering the workforce felt they were gaining something valuable, just as fathers stepping up participation in parenting felt they were gaining something valuable, but everybody hates housework.

A potential argument against our cultural explanation could be the fact that gender equalization appears to be continuing apace with regard to child-rearing. As noted above, fathers continue to increase their time spent with children  (see Figure 4), even as they lag behind in matching women’s housework time. Mothers’ earnings are increasingly thought of as essential to the family, rather than considered supplemental income. Although we can only speculate, these developments may be better explained by rising economic insecurity than by a continued progression of commitment to androgynous parenting. Economic necessity may be associated with increased support for mothers’ employment, even as more young people began to report a preference for the male breadwinner–female homemaker model starting in the mid-1990s. 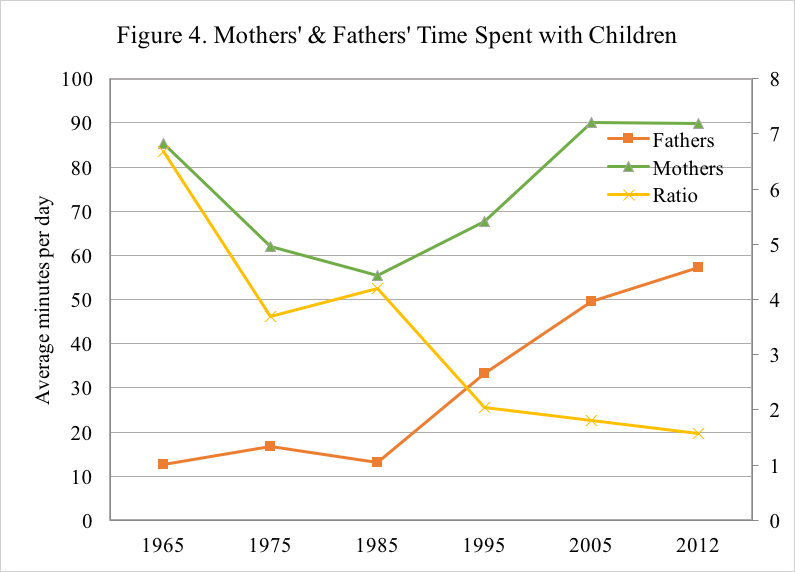 It has long been assumed that progress for women in the public sphere would result in improvement for women in the family. However, our findings, along with other scholarship, suggest that advances for women in the public sphere may increase many people’s desire to reinforce gender essentialist ideology in the family. Perhaps surprisingly, we didn’t find a pairing of egalitarian and essentialist ideology among survey respondents, where high school students endorsed the male breadwinner arrangement but also equal decision-making at home. Instead, the increase in agreement with the statement “the husband should make all the important decisions in the family” suggests that a significant minority of youths have reverted to an endorsement of male supremacy, at least within the family realm. So long as essentialist beliefs about innate differences in men and women persist, efforts to equalize women’s standing with men may remain stalled.