Are Some Millennials Rethinking the Gender Revolution? Long-Range Trends in Views of Non-Traditional Roles for Women

A briefing paper prepared for the Council on Contemporary Families by Nika Fate-Dixon, The Evergreen State College.

Since 1977, the General Social Survey has asked Americans their opinion about the best expressions of gender in private and public life, and especially about the presence of mothers in the workforce. Overall, there has been a tremendous increase in the public’s endorsement of equality at home and in the workplace over the past 40 years. The latest data available from 2014 confirm that on the whole progress continues. However, the average gains between 1977 and 2014 obscure certain setbacks since the mid-1990s, concentrated, somewhat surprisingly, among a segment of young adults aged 18 to 25, who in 2014 seem to be more conservative on a few issues than their comparable age group was in 1994.

I analyzed a set of GSS questions, including “It is much better for everyone involved if the man is the achiever outside the home and the woman takes care of the home and family,” looking at data from 1977 to 2014, inspired by Pepin and Cotter’s study of gender attitudes in the Monitoring the Future data that they so provocatively revealed. For my study, I looked at people ages 18 to 25, and I found a fascinating record of change—and a few puzzles. 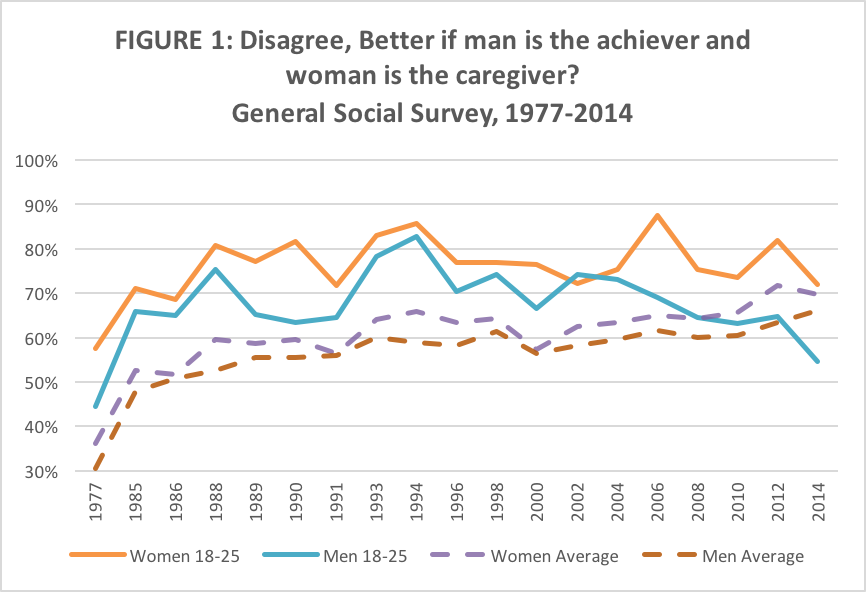 We have undeniably come a long way since 1977. In that year two-thirds of Americans agreed that “it is much better for everyone involved if the man is the achiever outside the home and the woman takes care of the home and family” (see Figure 1). Nearly two-thirds of respondents believed that preschool children were harmed if their mother worked outside the home (see Figure 3), and slightly less than half thought a working mother could develop as warm a relationship with her children as a stay-at-home mother (see Figure 4). Fewer than half thought women and men were equally suited for a career in politics (see Figure 2).

Yet over time, values shifted. By 1994, a majority of Americans believed that men and women were equally capable of succeeding in work and politics and that this did not necessarily harm a mother’s relationship with her children. Opinions about gender roles at home had been turned upside down. Now two-thirds of those surveyed disagreed with the claim that the male breadwinner/female homemaker was the ideal arrangement. By 1994, fewer than half still believed that preschoolers were negatively affected when their mothers worked, and 69 percent thought that mothers who worked could have as warm of a relationship with their children as mothers at home. Almost three-quarters of respondents believed that women and men were equally suited for politics, as seen in Figure 2. 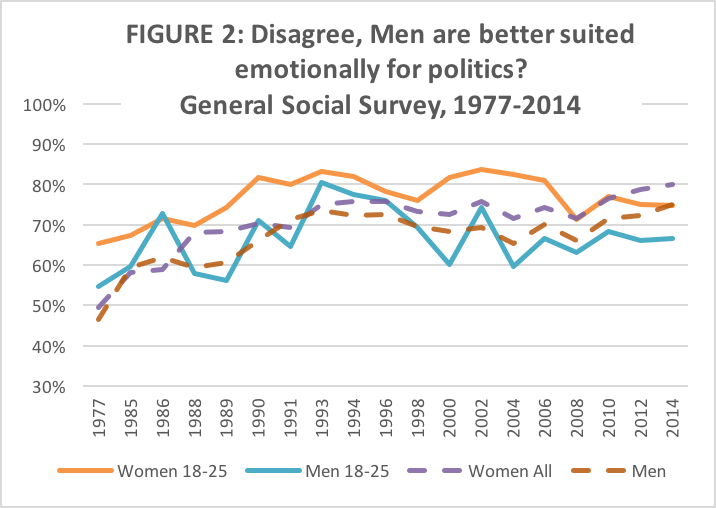 The next decade saw some backsliding in support for gender equality. By 2000 the proportion of Americans agreeing that a woman’s place was in the home had ticked up by six percentage points, as had the proportion expressing the belief that working mothers caused their preschoolers harm, which can be seen in Figure 3. In 2000, the number of people that said working mothers could not have as warm a relationship with their children as full-time homemakers went up by eight percentage points compared to 1994 (See Figure 4). And the numbers saying that women were not as suited for politics as men rose by four percentage points.

However, acceptance of gender equity seemed to rebound in the next decade. The proportion of Americans who rejected the superiority of the male breadwinner family climbed to 68 percent in 2014. The number of Americans disagreeing that working mothers harmed their preschool children rose from about half in 2000 to about two-thirds in 2014.

By 2014 less than a quarter of the population – a record low – expressed the view that working moms could not be as close to their children as stay-at-home moms. The year 2014 also set a record high for most Americans thinking that women were equally capable as men in politics, with 78 percent endorsing this view.

Beneath this overall progress, there was one exception to the upward trend in support for gender equality, and that was among young adults aged 18 to 25. After 1994, and especially after 2010, this age group saw a stall, and in some cases a fall-off, in the proportion supporting gender equality in the home, particularly on questions about men’s and women’s roles in the family and the abilities of employed mothers to successfully raise children. As noted below, the GSS findings for that age group are based on a rather small sample, and thus relatively minor changes among those interviewed from year to year may exaggerate the amount of change, but the trends in those samples do suggest that the high school seniors discussed in the lead briefing paper by Pepin and Cotter don’t simply represent a blip on the historical radar.

By 1994, 71 percent of 18-to-25-year-olds rejected the claim that preschool children suffer if their mother works out of the home. In other words, more than 70 percent of young adults thought women could combine employment and family without harming their children. In the years following, however, this steadily declined to a low of 62 percent in 2000. It then oscillated back and forth between 65 and 75 percent between 2004 and 2012, reaching a one-time high of almost 80 percent in 2010. But it then fell back to 72 percent in the next four years, only a point higher than 1994. 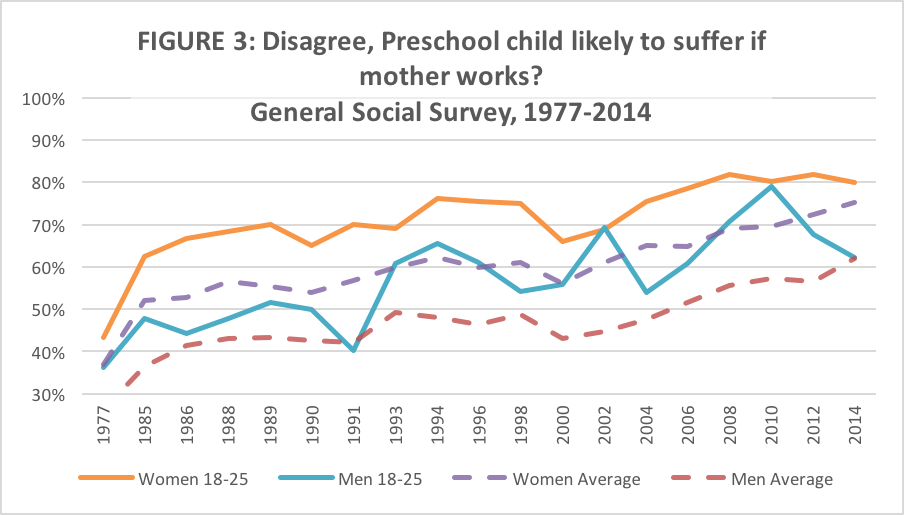 This is still a far cry from the suspicion towards employed mothers expressed during the 1970s and 1980s. But declines in young men’s support for working mothers accounted for most of the stall in the first question and the fall in the second. In 1994, almost 66 percent of young men said that employed mothers did not harm their preschool children. In 2014, only 62 percent of young men took the same position, four points lower than in 1994. Similarly, in 1994, almost 75 percent of young men said that a mother who worked out of the home could have as warm a relationship with her children as a stay-at-home mom. After bouncing up and down over the next 18 years, from a low of 62 percent in 2000 to a high of almost 80 percent in 2010, this fell to 70 percent in 2014—four points lower than in 1994. 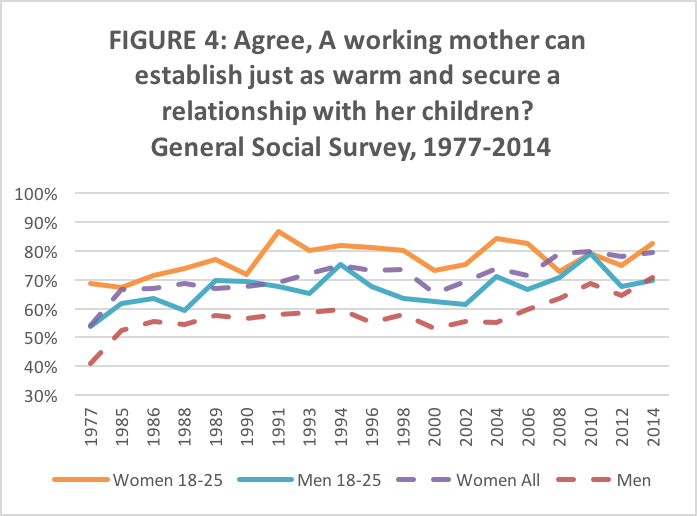 So unlike the survey results reported by Pepin and Cotter, the attitude changes in the GSS between 2010 and 2014 revealed a striking gender gap among 18-to-25-year-olds, with young men accounting for the average decrease in support for working mothers. The percentage of young women disagreeing that preschool children suffered when their mothers worked remained at a solid 80 percent in 2010 through 2014. And the number of young women who affirmed that working mothers could have just as warm a relationship with their children remained at about 80 percent or slightly higher.

The most significant drop in support for gender equity occurred on the issue of what is the ideal family arrangement. By 1994, an overwhelming majority (84 percent) of 18-to-25-year-olds disagreed that the male breadwinner/ female homemaker family was superior to other family arrangements. But by 2014 only three-quarters of youth disagreed.

Here the decline was especially dramatic in the case of young men, who went from 83 percent disagreeing in 1994 to only 55 percent disagreeing in 2014, a drop of 28 points in over the past 20 years. In contrast, 85 percent of young women disagreed in 1994 and despite some slippage since then, by 2014 a strong majority of 72 percent of young women still disagreed that the traditional male-breadwinner arrangement was preferable.

In fact, as of 2014, men aged 18 to 25 were more likely than their older counterparts to agree with the “old-fashioned” notion that it is better for women to take care of the home and for men to be the achievers in the outside world. In the 2014 survey, 67 percent of American men older than age 25 rejected the claim that the male breadwinner marriage is the ideal family form. But only 55 percent of men aged to 18-25 did so.

The sample size of 18-25-year-olds in the GSS data is only about 200 respondents in any given year.  Because of this small number, any year-by-year shifts in attitude among this relatively small number of respondents manifest as dramatic percentage changes that probably exaggerate overall shifts in opinion.  Nevertheless, there does seem to be a real and significant downward trend in support for egalitarian home-life arrangements among males in this age group.

What are we to make of these findings? If these survey results are accurate, do they represent a long-term trend toward rejection of the feminist goal of equal sharing at home and at work, as the Pepin and Cotter findings might suggest? Or does this dip represent a particular confluence of family and school experiences for a significant group of Americans whose teenage years were haunted by the housing crisis and onset of the Great Recession? The classic definition of millennials, Frank Furstenberg points out in his contribution to this symposium, is young people born in the 1980s and 1990s, although the category has recently been extended forward to include youths born in the early 21st century. Men and women aged 18 to 25 in 2014 would have been born between 1989 and 1996, turning 13 between 2002 and 2009. Are these young adults reacting to an adolescence where financial tensions pushed families into conventional gender arrangements or heightened tensions among dual-earner families in integrating work and family roles, as Dan Carlson suggests? Or as increasing number of millennials move back home, are they re-evaluating their parents’ experiences or their own options for the future? Or is something else entirely going on?

It is important to put the decline in young people’s support for non-traditional family arrangements in perspective. If we follow Cotter, Hermsen, and Vanneman’s model in their 2014 paper and combine all four questions into a cumulative score, as illustrated in their Chart 2, upward progress is evident. Between 1977 and 1994, Americans’ egalitarian answers increased by 36 percentage points (See Figure 5). The small fluctuations between 1994 and 2010 cancel out to a one percent increase, supporting the description of this period as a stall. Yet when we consider all age groups together, between 2010 to 2014, support for egalitarian family arrangements rose by 5 percentage points and became the highest score on record. Since 1977, Americans have increased their support of non-traditional family arrangements by 45 percentage points. 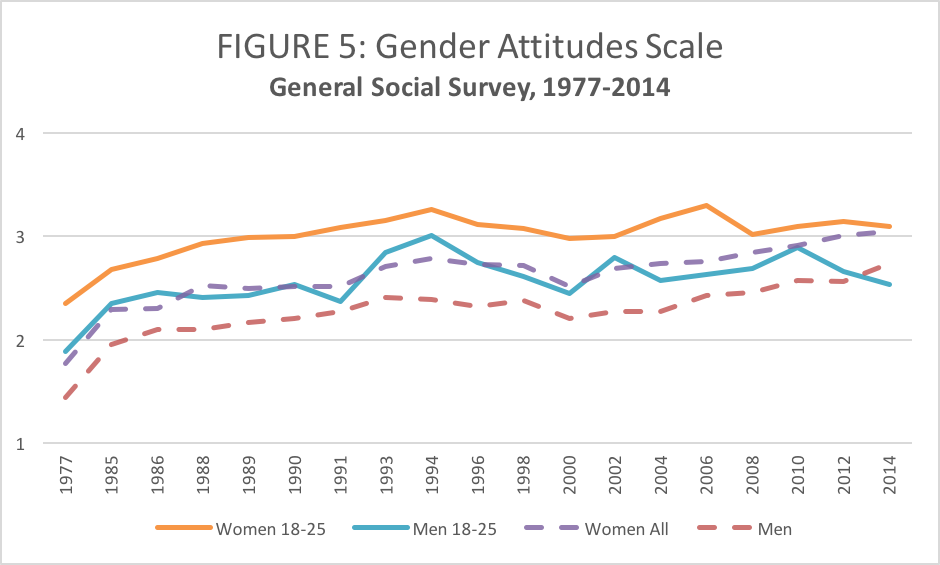 But if the next set of surveys confirms a continued stall or fall-off in support for gender equity among the young, it is certainly possible that we will see even more growth of the neo-traditionalist attitudes discussed by Pepin and Cotter. Or perhaps the polarization of politics, combined with continued relative losses in men’s contributions to family incomes, will create even more divisions among young Americans over traditional vs. egalitarian attitudes toward women, as Cassino’s findings suggest. Or maybe these so-called millennials will confound our expectations once again as they step closer to marriage and family life.