Reactions to Other Contributors

A briefing paper prepared for the Council on Contemporary Families by Joanna R. Pepin, Department of Sociology, University of Maryland and David A. Cotter, Professor of Sociology, Union College.

Our study of youth’s attitudes about gender has left us with an intriguing puzzle. In the last few decades, high-school seniors became increasingly likely to support women’s employment, even mother’s employment, but we saw a different trend in youth’s beliefs about gender in families. Starting in the mid-1970s, youth increasingly supported equal sharing of housework and decision making at home, but in the mid-1990s, the trend toward equality reversed course. To help us make sense of why these attitudes have changed, Cassino and Carlson offered insightful reflections about potential explanations for these attitude trends. We also appreciated Furstenberg and Kawashima-Ginsberg’s thoughtful commentary, which raised some important questions about the implications of our findings. And finally we welcome Van Bavel’s contribution for providing the opportunity to consider whether these changes are restricted to the United States or part of a broader pattern.

Masculinity Backlash? Cassino offers compelling evidence that men’s behaviors and attitudes are responsive to perceptions of threats to their masculinity. He also points to research showing that high-earning women are only seen as threats to men when women’s earnings are objectively high, and this segment of the population is small but growing. Although youth in our study are too young to have direct experience with these influences, they may be susceptible to the same cultural panic about men’s place in society as their parents have. While the proportion of families with women as the primary earner has increased over time, the segment remains relatively small. According to sociologist Philip Cohen, for most families in which women are the higher-earner, women earn 51 percent to 60 percent of the total household. Moreover, in our data, the youth with highly educated mothers and mothers who worked consistently were the most likely to espouse egalitarian ideology. Although we can’t test this with our data, these youth may be the most likely to live in a household with mothers as the primary earner. Thus, increases in the proportion of women as the primary earner may be part of the explanation, but we don’t think it provides a substantial explanation – at least not at the level of their own families.

What is more perplexing is why young women’s attitudes tracked in the same overall pattern as young men’s. Although men may be reacting to their diminished role as (future) breadwinners, what explains young women’s declining endorsement of equality within families? If it is men’s perceived threat to their masculinity driving the change, we might expect to see a divergence in attitudes about gender between men and women, as Fate-Dixon does. Instead, our data shows that although young women were more egalitarian than young men, the gap between their views was consistent across time. As sociologist Virginia Rutter pointed out, there is a similar lack of change in the gender gap among adults’ attitudes. 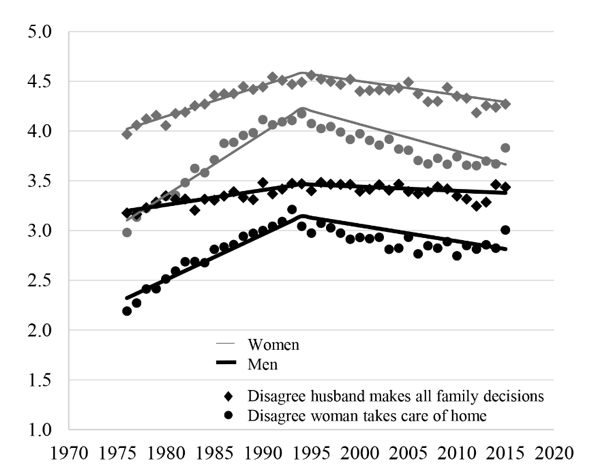 We also find it difficult to reconcile our findings with sociologist Kathleen Gerson’s research on what young Americans report they want out of relationships. Most young adults (ages 18-32) report they want an equal partnership, but when asked what their ideal family would be like if they were unable to achieve this ideal, men and women report different fallback plans. The majority of these young men reported their fallback plan was the male-breadwinner/female-homemaker model, while most women indicated they would prefer to be self-sufficient, either by not marrying or divorcing. Although the youth in our survey weren’t given the option of a male-breadwinner model or to forgo a family relationship entirely, in light of Gerson’s findings, it is surprising that we didn’t see a gender divergence in attitudes about gender in families.

Structural conditions? Carlson suggests that the retreat from endorsing equality in families may be a reaction to the difficulties couples face pursuing egalitarian partnerships given the persistent structural obstacles to doing so. According to Carlson, the lack of changes such as paid parental leave makes achieving equality at home challenging for families, forcing them into conventional family arrangements which they must reconcile with their beliefs. It is plausible, as Carlson suggests, that some youth witnessed their parent’s struggle to achieve equal partnerships and concluded that a male-breadwinner arrangement would have been less stressful. But some also witnessed their father’s difficulty finding stable employment with livable wages. Theoretically, these youth may have been more likely to reject a male-breadwinner model, viewing their mother’s employment as a valuable resource. Indeed, the continued increase in youth support for mothers’ employment in our sample is consistent with this speculation.

We therefore see two population changes happening simultaneously – families striving for egalitarian partnerships but unable to achieve or maintain them because of the lack of structural supports and men finding it increasingly difficult to provide for their families due to changes in the economic climate. But these structural and cultural explanations do little to account for the resurgence in beliefs about men’s dominance over women in the home. As Carlson described, research increasingly shows multiple benefits for couples who create egalitarian relationships. An increasing proportion of youth should also be witnessing these egalitarian relationship dynamics. Why then are youth more likely to reject egalitarian ideals for families than they were two decades ago?

The future. Furstenberg and Kawashima-Ginsberg raise important questions about the implications of our findings. Furstenberg wonders if youth carry these egalitarian-essentialist beliefs with them as they move into partnerships and become parents. Kawashima-Ginsberg questions what might happen to youth’s beliefs about gender in families during the Trump administration. If youth do not see the personal as political, as Kawashima-Ginsberg suggests, how will the structural changes that Carlson argues are needed come about?

Is it just the U.S? The question posed by Van Bavel is an especially important one. Knowing whether the changes happened in one country, or a limited subset of countries, as opposed to more broadly, would be particularly interesting because it would point our search for explanations in different directions. Van Bavel’s findings suggest that the stagnation or retrenchment on gender ideologies is not only uneven by domain, but limited to the United States. However, other scholars have suggested that there has been a plateauing in Australia and some European countries. So while the gender, work-family policies, and demographic patterns in those countries may point toward continued progress toward gender equality, we note that these tend to be more limited in the United States, and that they are at best a few decades old in most countries.