Our research on complex oxides is conducted in the Materials Physics Laboratory at UT Austin, established by Prof. Alex Demkov and Prof. John Ekerdt.  Epitaxial oxides grown on both Si and Ge promise to extend and enhance semiconductor technology for the 21st century.  Our research develops a fundamental framework for the growth of epitaxial perovskite films and heterostructures on Si and Ge (001) surfaces using atomic layer deposition (ALD).  Our published work has included the growth and characterization of several crystalline oxide films on Si and Ge, including photocatalytic anatase TiO2, SrTiO3, ferroelectric BaTiO3, high-k dielectrics (LaAlO3 and SrHfO3), and doped SrTiO3 films (La:SrTiO3, Co:SrTiO3, Al:SrTiO3) with conductive, ferromagnetic, and enlarged band gap functionality.

Our initial research informed the broader community that four unit cells of SrTiO3 are required to enable heteroepitaxy on Si during ALD or crystallization of the amorphous film into a heteroepitaxial layer after annealing (Fig. 1).  The four-unit-cell SrTiO3 template is created by MBE due the ability to prevent Si oxidation with precise oxygen control during deposition.  We have also shown that heteroepitaxial layers can be monolithically integrated with Si (001) without the formation of a SiOx interlayer between the Si (001) surface and the SrTiO3 layer because ALD is performed at lower temperatures than are typical for MBE creating possible advantages in device designs that require the crystalline oxide to be in contact with the Si (001) surface. 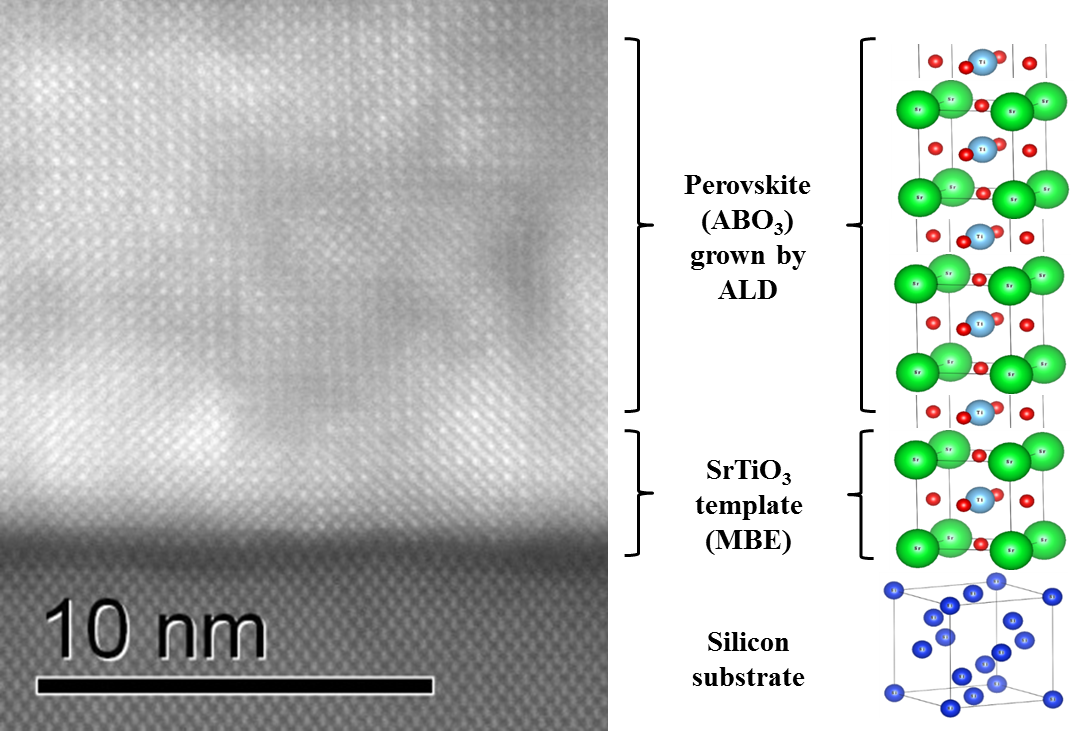 Fig. 1.  Cross-sectional transmission electron microscopy image of a 15-nm SrTiO3 film grown by ALD on SrTiO3-buffered Si (001) after annealing at 550 °C for 5 min.

Over the past year, part of our lab research was focused on low-voltage/low-power switching devices based on crystalline ferroelectric oxides.  Specifically, we explored the fundamental materials science of integrating a single crystalline, single domain ferroelectric material (with out-of-plane polarization) onto silicon.  The research explored both physical (MBE) and chemical (ALD) routes for integrating these single crystal layers on silicon, to

achieve out-of-plane polarization in the ferroelectric layer for thicknesses up to 50 nm, achieve a single domain ferroelectric state, and integrate these layers into transistors to harness the “negative capacitance” state and realize sub-threshold slopes less than 60 millivolts per decade.  The research to date has focused on the primary goal of using a SrTiO3 layer epitaxially grown on Si (001) as a buffer for the nucleation and growth of ferroelectric BaTiO3 films with out-of-plane polarization.  The integration of BaTiO3 grown by ALD and MBE with Si (001) has been achieved using a thin SrTiO3 buffer layer (Fig. 2). 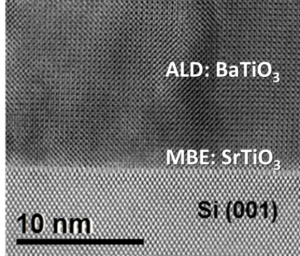 In addition, our group has studied the monolithic integration of metallic perovskite layers since theoretical work has shown benefit when a thin quantum metal is positioned between the Si channel and the ferroelectric layer.  The deposition of crystalline La-doped STO (La:STO) was studied by both MBE and ALD methods.  Monolithic integration of La:STO films with Si (001) has been achieved for La-doping up to 25 atomic percent.  Studies have explored the doped layer electrical properties and the interfaces that form with them in heterostructures (Fig. 3).

Notably, our recent work demonstrated the growth of crystalline SrTiO3 directly on Ge (001) via a chemical-only method (ALD).  The SrTiO3 and Ge substrate are epitaxially aligned such that (001)STO?(001)Ge­ and (100)STO?(110)Ge, leading to a 45° in-plane rotation that is expected for lattice-matching between the SrTiO3 and Ge (001) substrate.  Thicker SrTiO3 films (up to 15 nm) are then grown on the crystalline SrTiO3 seed layer.  The crystalline structure and orientation are confirmed via reflection high-energy electron diffraction, X-ray diffraction, and transmission electron microscopy (Fig. 4).  The current work demonstrates the potential of ALD-grown crystalline oxides to be explored for advanced electronic applications, including high-mobility Ge-based transistors. 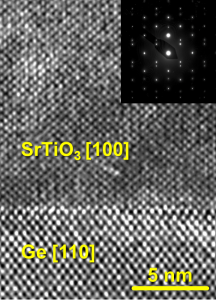