Spin Transfer Torque Random Access Memory (STT-RAM) is a universal, non-volatile, and low power solution for memory storage. Manufacturing costs and process reliability are barriers to implementation of STT-RAM. We aim to:

This research targets the selective deposition of TiN onto HfO2 for use as the word line in an STT-RAM (spin-transfer torque random access memory) device. It focuses on scalable technologies that are compatible with all steps in STT-RAM fabrication. Previous work has shown that chlorosilane and methoxysilane molecules can effectively block the HfO2 surface from TiN deposition by area selective atomic layer deposition (AS-ALD). Other research has demonstrated the blocking efficiency of these organic layers declines with increasing number of cycles of atomic layer deposition. This deficiency has been attributed to imperfectly formed self-assembled monolayers during deposition or degradation of the organic layer due to the high temperatures of the ALD process. The decline in performance of the organic blocking layer limits the thickness of the material that can be deposited in unblocked regions without loss of selectivity. In this work, we study methods to improve the blocking characteristics of these organic layers. Using x-ray photoelectron spectroscopy, scanning electron microscopy, transmission electron microscopy, water contact, and  atomic force microscopy, we examine the nucleation of TiN on the organic blocking layer and the limits (temperature, number of ALD cycles) of these passivants. Finally, we analyze the effectiveness of these organic layers to block TiN deposition on substrates with pre-formed features and explore their potential for device applications. 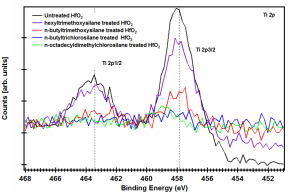 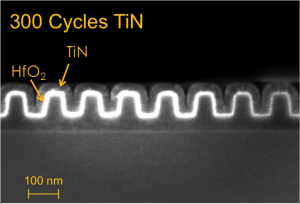 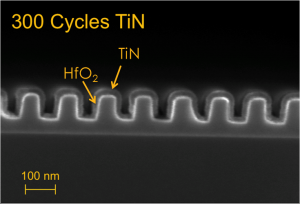 Cobalt is a prime candidate for implementation of the magnetic bit line within the STT-RAM structure as CoO can be selectively deposited via atomic layer deposition (ALD) and easily readily reduced to form Co metal. This work serves to investigate the reduction of an ultrathin CoO layer to Co metal via thermal annealing in the presence of a reducing gas. While CoO has been shown to reduce easily under the presence of an oxygen sink, precise control over the resulting film’s grain structure and magnetic domain morphology has yet to be demonstrated. Film crystallinity and magnetic coercivity are critical to achieving desired performance within the magnetic bit line; as such, this work focuses on understanding the fundamentals of the nucleation and growth of the CoO layer as a function of the substrate composition. Additionally, the work also explores the effect of reducing conditions on the CoO thin film and the magnetic properties of the resulting Cobalt metal. Characterization techniques used in the analysis of the film structures include: angle resolved x-ray photoelectron spectroscopy, x-ray scattering, transmission electron microscopy, reflection high energy electron diffraction and the superconducting quantum interference device.