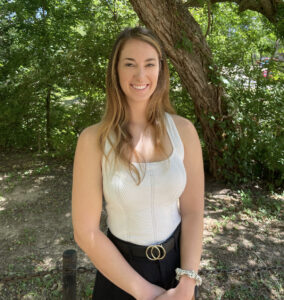 I received a BS in Molecular, Cell, and Developmental Biology from the University of California at Santa Cruz in 2016. My career in research began in the GlaxoSmithKline – Sanford Burnham Prebys Center for Translational Neuroscience in San Diego where I focused on the roles of microglia in frontotemporal dementia with progranulin haploinsufficiency. Following this role, I worked in the Conrad Prebys Center for Chemical Genomics where I focused on validating protocols for neuronal differentiation of patient derived iPSC cell lines. My work in neurodegeneration eventually led to me pursuing my PhD in Pharmacology and Toxicology at the University of Texas at Austin, where I am now a doctoral candidate in Dr. Andrea Gore’s lab.

My current research focuses on the sexually dimorphic effects of developmental exposure to endocrine disrupting chemicals (EDCs) on the kisspeptin signaling pathway, specifically on the hypothalamic KNDy and kisspeptin neurons. The kisspeptin signaling pathway is involved puberty onset, estrous cycling, and reproductive maturation and success. Over the last 50 years, there has been a trend towards earlier pubertal onset and increased incidences of reproductive disorders. It is hypothesized these changes are a result of dysfunctions in KNDy and kisspeptin neuron development caused by early exposure to EDCs. This study will utilize techniques including RNAscope, blood serum analysis, and reduced representation bisulfite sequencing to determine if early exposure to Aroclor 1221, a weakly estrogenic EDC, effects KNDy and kisspeptin neurons, as well as additional downstream constituents in the kisspeptin pathway.