HERS is a project that has attempted to design a process to create customizable menstrual products based on preferences. The purpose of this study was to find a solution to the need of menstrual products for people affected by humanitarian crisis, which was presented by the IFRC.

The project was inspired by a collaboration between Dr. Janet Ellzey of UT Austin and William Carter of the IFRC in 2017, and then passed on to the HERS team and the LRC in the Fall of 2018. HERS was funded through the President’s Award for Global Learning at UT Austin for the duration of the project from Fall 2019-Fall 2020. 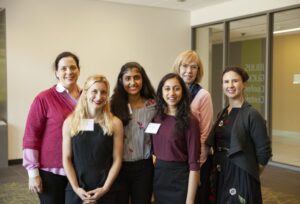 The initial priorities expressed by the IFRC for the HERS project included creating a quick, on-site response to MHM needs and preferences of an affected community. As new priorities were identified for the hand-off of the project to the LRC, the HERS team evolved their approach in order to attempt to meet the needs that emerged. These priorities included the acquisition of materials from a local source, a production goal of 150 pads/hour, and a pad design based on preference surveys with the target community.

Research conducted prior to in-country testing served to evaluate the MPP that would be tested with persons displaced from Syria living in the ITS in Southern Lebanon. This research allowed the HERS team to begin to test the feasibility of meeting priorities established by the IFRC and LRC.

In the spring of 2019, the HERS team utilized four data collection methods: a focus group with Refugee Services of Texas, a comfort test and efficacy test of MPPs with students from the University of Texas at Austin, and a survey to assess needs and preferences of the target community conducted by the LRC.

In the summer of 2019, the HERS team conducted two efficacy tests of MPPs with persons displaced from Syria and a focus group with the LRC volunteers who distributed MPPs and conducted the corresponding surveys. Documentation of the value-laden approach and the pad press was handed off to our partners at LAU, and to the LRC, with a long-term goal of integrating this pad press into a community-led MHM program in the ITS the HERS team has worked with in Southern Lebanon. 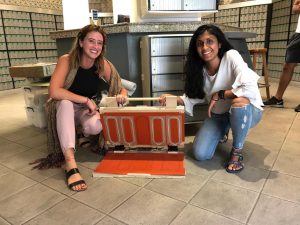 The HERS project was designed to create a process that could be replicated and integrated into humanitarian responses anywhere in the world. The data collected and feedback from research done in Lebanon served as a model to test and inform such a process to create a framework for future implementation.