The Humanities Institute Spring 2017 Faculty Fellows Seminar on
“Health, Well-Being, Healing” has begun! At our first meeting on February 21st, Phil Barrish, Professor of English, presented his work-in-progress, “Environmental Illness and the Future of Health Care,” a literary analysis of Chang-Rae Lee’s first work of speculative fiction On Such a Full Sea. Lee’s On Such a Full Sea imagines three health care scenarios that respond to the long-term effects of human-wrought environmental damage on human health, and more specifically to the uneven distribution of this environmental depredation. The three scenarios present in the novel are based on our contemporary discourse on health care, from “a left-wingers dystopian projection of the health care landscape under a supposed free market system,” as Barrish describes it, to “a right-winger’s nightmare vision of . . . a single-payer government-run system.” Dr. Barrish’s essay, which 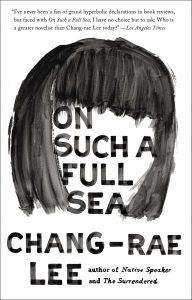 examines the representation of the political economy of health care in On Such a Full Sea, builds off of his previously published work, including his essay “Health Policy in Dystopia,” published in Literature and Medicine in 2016 and “The Sticky Web of Medical Professionalism: Robert Herrick’s The Web of Life and the Political Economy of Health Care at the Turn of the Century,” published in American Literature in 2014.

Dr. Barrish’s interest in the medical humanities originated in the national conversation around The Patient Protection and Affordable Care Act (“Obamacare”) and single-payer health care. He identifies two different models of the medical humanities currently in use. One model is used by medical practitioners who see the humanities as a tool to enhance the practice of care and of self-care. The other model is used by academic scholars who focus on both the infrastructure of health care and the literary representations of the experience of illness from various perspectives. Dr. Barrish became more interested in how literature positions its readers to ask infrastructural questions about health care. This “infrastructural turn,” though practiced differently in different disciplines, tends to focus on the built environment, on the materiality of systems and networks, and on the relationship of the individual to institutions.

On Such a Full Sea, written and published during the planning and early implementation of ACA, is deeply embedded in our historical moment. The novel, writes Barrish, “shows relatively little interest in portraying the illness experience as such” but rather “seeks to imagine what might be called the political economy of health care in an America devastated by illness.” Literature, and especially speculative fiction, Dr. Barrish argues, invites us to ask structural questions, such as, “Who is paying for the care?” “How is it distributed?” “What kind of care is available and to whom?” Dr. Barrish writes that he would like to see scholars in the medical humanities “devote more sustained attention to literary engagements with health care as a system.”

The function of literature in this context became a core question in the first meeting of the Faculty Fellows Seminar. Seminar participants pointed out that there is no certainty in literature, that ambiguity is part of the experience of reading literature, and that, while it prompts readers to ask those broader, structural questions, it offers no definitive answers. Dr. Susan Rather, Professor of Art History, expressed a feeling of dis-ease with the way works of literature are used in medical humanities programs in medical schools to train residents in practices of care; not because the medical approach to literature is invalid, but because she did not recognize the medical approach as related to her discipline as a humanist scholar. As an art historian, Dr. Rather began working in the medical humanities because she wanted to introduce students interested in entering the field of medicine to how the humanities are practiced in the academic disciplines, as distinct from how these students might encounter the humanities in medicine. Dr. Alan Friedman referenced an essay by Virginia Wolf, titled “How Should One Read a Book?” in which Woolf writes that “the danger and difficulty of words” prevents an author from telling the reader anything definite, and that in order to read fully, one cannot come to reading with an agenda. These Faculty Fellows teach to make students more comfortable with ambiguity, more aware of the complex and slippery dynamic any diagnostic situation holds, and which can be found in the density and complexity of literary language.

According to Dr. Barrish, On the Full Sea asks us to consider what is valuable about the social programs the insidiousness of which we, as a society, have been carefully tracking. The thought experiment that Lee’s novel offers is especially important now that we are facing these programs being dissolved. Dr. Barrish argues that among the three health care scenarios represented in On the Full Sea, Lee shows that even the worst case scenario of socialized medicine is still preferable to the free-market model. In other words, there may be very good reasons to be suspicious of government controlled institutions, but Lee suggests that we in the U.S. should also be wary of these services being privatized. The dystopian scenario of fully privatized health care in the novel suggests that perhaps it is time to stop knocking social welfare and to start urgently studying these systems. Physicians, especially, should be able to understand the structural issues in these systems.

3 thoughts on “Health Care Economies and the Danger of Words”