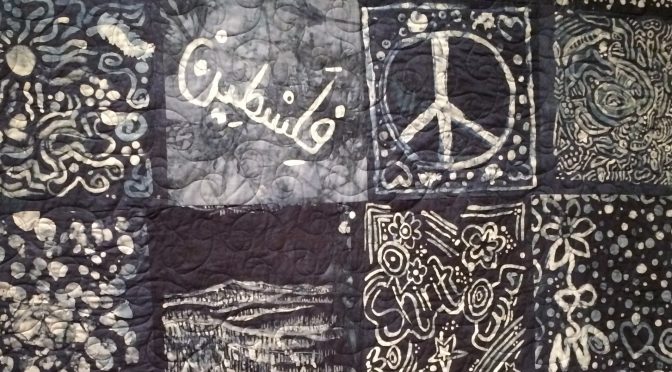 Sometimes, various aspects of our lives intersect in unexpected and enriching ways.  This was the case when I learned that the University of Texas at Austin’s Humanities Institute and Schusterman Center for Jewish Studies, along with the Jewish and interfaith communities of Austin were hosting a week-long visit from four young women leaders—Palestinian and Jewish Israeli—who are part of a Santa Fe-based organization called Creativity for Peace. The events take place from Feb 12-16, 2017.

Creativity for Peace (CfP) is in its 18th year and “prepares young Israeli and Palestinian women to be peacemakers in their communities and across borders with compassion, friendship, and courage.” I am an active member of each of the Austin-based host communities, and I also have a collaborative relationship with Creativity for Peace in Santa Fe. Each has unique qualities but all share an openness to new experiences, and a desire for change toward social justice. Some exercise the mind; others the capacity for human connections. Dialogue is the active link that binds me to each of these organizations’ endeavors, and which catalyzes our conversations across borders.

I truly look forward to interacting with all of them on my home turf, a rare opportunity to bring so many resources to the task of promoting peace though dialogue, art, and action.

As a publicly engaged folklorist, I divide my time between Austin, where I teach in the Department of Anthropology and the Schusterman Center for Jewish Studies here at UT (including Difficult Dialogues courses on immigration through the Humanities Institute), and Santa Fe, NM, where I direct an experimental lab at the Museum of International Folk Art called the Gallery of Conscience (GoC). The GoC is devoted to the exploration of social justice and human rights issues through the lens of folk and traditional arts.

Established in 2010, the mission of the GoC at the Museum of International Folk Art is to serve as an agent of positive social change by engaging and connecting individuals and communities around social justice and human rights issues, using the power of folk arts to address historical and current events; to catalyze dialogue; and to promote personal reflection, communication, and action. Since 2012 the GoC has operated through a “prototyping” process, in which exhibitions evolve organically over time in response to visitor input and community engagement, ever a work in progress.

Dialogue is at the heart of the GoC’s mission and it was the spark that generated our multi-year collaboration with CfP and two award-winning folk artists. During two successive summer workshops,  CfP’s Israeli and Palestinian campers came together with local New Mexican young women at the Gallery to work with master-level folk artists. They explored mutually relevant themes of home, belonging, place and displacement which were mirrored in the GoC exhibition, Between Two Worlds: Folk Artists Reflect on the Immigrant Experience, which was on display at the Museum of International Folk Art between spring of 2014 and spring of 2016. Both workshops were held in conjunction with CfP’s annual three-week summer camp intensive for Palestinian and Jewish Israeli girls, age 15-17.

The issues affecting immigrants, refugees or displaced persons can be difficult to directly confront, either because of stigma, taboo, language barriers, stereotypes, or conflict. The GoC and CfP collaboration gave participants not only the opportunity to engage directly with the words and works of master-level traditional artists who speak out through their arts, but also the chance to share their own stories and personal experiences evoked by the art; to enrich their understanding of different points of view surrounding questions of home and belonging for people who share contested spaces; and to identify how they can respond directly to needs they see in their communities.

By the time the exhibition officially opened in the summer of 2014, the Gallery was perfectly—if inadvertently—positioned to respond to what national headlines—and President Obama—were billing as an “urgent humanitarian situation” in the United States (Washington Post June 2, 2014) involving thousands of unaccompanied children arriving in this country seeking asylum. Several of the artworks uncannily mirrored the reporting on these very current events, even though the artworks had been created years—sometimes decades—before. Two of the most evocative artworks include a painting by Cuban artist Cenia Guttiérez Alfonso, depicting an unaccompanied young girl crossing the Atlantic Ocean on her journey to a new land (Menina con Gallo/ Young Girl with Rooster), and a three-part sculpture by Peruvian-American retablo maker Nicario Jiménez (provocatively titled Immigration: The American Dream) which illustrates the differential receptions of three groups of undocumented Latino families–Cubans, Haitians, and Mexicans–arriving on our nation’s shores and greeted, respectively, either by refugee assistance agencies, detention centers, or border police.

That summer also coincided with the outbreak of renewed conflict between Jewish Israelis and Palestinians in Gaza, rendering Between Two Worlds themes all the more compelling for CfP workshop participants. The works on display sparked dialogue about some of the exhibit’s core themes which resonated with all of the young women– the struggle to belong in a place where you may or may not feel welcome, and the experience of living between two worlds. These works included textiles, wood carvings, beadwork, paintings and poetry by Cuban, Mozambican, Hmong, Mexican, Hispanic New Mexican, Brazilian, Lakota, Polish, Navajo, Tibetan, Nigerian and Peruvian artists. Following this exercise, the young women were introduced to the exhibit’s featured immigrant artist—Nigerian Yoruba indigo dye artist Gasali Adeyemo; (Year One) and Mexican immigrant papel picado (cut paper) artist, Catalina Delgado Trunk (Year Two). These artists introduced the young women to the cultural background of their art and work.

For the remainder of the workshop, participants were encouraged to reflect on their experiences of home, belonging, and displacement, and to express their ideas through the artists’ medium. In the first year of the collaboration, the young women were encouraged to create a quilt block representing some artistic representation of “home” using the batik dying technique introduced by Gasali. These blocks were later sewn into a quilt for the Gallery, and represented some of the profound sentiments that were sparked by the exhibit’s themes. For example, a young Palestinian woman, far from home for the first time, depicted a house aglow with the lights of a traditional wedding. An Israeli portrayed the Jewish Friday-night Shabbat (Sabbath) dinner, when her family gathers for stories and prayer. In the second year of the collaboration, the participants created symbols of home, peace, or family using the cut paper technique  of papel picado represented in Catalina’s award-winning work, which were bound into an illustrated book for the Gallery’s dialogue lounge. Both workshops resulted in original works of art, and stories from the CfP campers, that were subsequently featured in the exhibition itself.

Many of these campers have gone on to become young leaders of the Arab-Israeli peace process. They have undertaken intensive leadership training in their home regions on how to facilitate groups, organize projects, serve as spokeswomen and take other actions to help achieve peace. The result has been a steady stream of speaking engagements at conferences both at home and abroad, attending global summits, meeting with government leaders, and even, in some cases, returning to Santa Fe to serve as junior counselors at the CfP summer camp. Their trip to Austin is part of a national tour in which four of these young leaders, along with CfP executive Director Dottie Indyke, will meet and hold workshops with high school and college students throughout the United States to talk about the process that brought them together and answer questions from the audience.

As I prepare to welcome the young leaders of CfP to Austin next week, I realize that one of them, Deema Yusuf, was a participant in our initial workshop with Gasali Adeyemo when she was a first-time CfP camper during the summer of  2014. Writing about the quilt block she created at the time, Deema reflects on the importance of language as both a tie that binds and a spark for dialoguing across difference:

I look forward to welcoming her—and the other representatives from CfP in Santa Fe, and Israel and Palestine—to my Austin home! We live lives in so many time zones, so many dimensions these days that it is rare for things we love to come together. Their visit is a great opportunity for dialogue, engagement, and action.

The Humanities Institute is hosting its Spring 2017 Difficult Dialogues Public Forum with Creativity for Peace on Monday, February 13 at 7pm at the University of Texas at Austin. To learn more about this event, visit us here.

Dr. Suzanne Seriff is a folklorist and Senior Lecturer in the Department of Anthropology at the University of Texas at Austin, where she also received her Ph.D. Her research focuses on Mexican culture, immigrant arts, and public culture. She is Director of the Gallery of Conscience (GoC) at the Museum of International Folk Art in Sante Fe, NM.