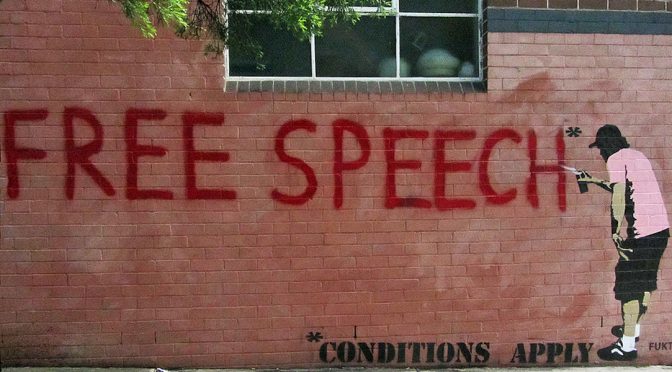 Time Magazine’s cover story question about Donald Trump—is truth dead under Trump?— doesn’t answer the question so much as contends that the leader of the free world doesn’t think it’s a relevant question.

First, I was never a fan of that description of U.S. presidents, in part because much of the rest of the free world doesn’t always follow the leader (for perfectly rational reasons, such as a concern for international law, which can conflict and has conflicted with U.S. interests). But these days, the American public has expressed concern that ours is a leader of the world of “free, one-time offer, while supplies last, call before midnight so you don’t forget, can you believe the quality at this price, an offer like this is a once in a lifetime” deal.

To infomercial hosts, carnival barkers, and other hustlers, questions about truth just don’t matter much. Freedom of expression becomes about the hustle, not truth.

For the rest of us, truth is, of course, never alive or dead. It’s something we struggle to see, to realize, to make real in our lives. And that’s always messy business.

I suggest going back to John Stuart Mill’s classic book On Liberty, published in 1859, to reflect on truth.

In the most-often quoted passage from the book, Mill makes the case for freedom of expression, based on its role in truth-seeking:

“If all mankind minus one were of one opinion, mankind would be no more justified in silencing that one person than he, if he had the power, would be justified in silencing mankind. Were an opinion a personal possession of no value except to the owner, if to be obstructed in the enjoyment of it were simply a private injury, it would make some difference whether the injury was inflicted only on a few persons or on many. But the peculiar evil of silencing the expression on an opinion is that it is robbing the human race, posterity as well as the existing generation — those who dissent from the opinion, still more than those who hold it. If the opinion is right, they are deprived of the opportunity for exchanging error for truth; if wrong, they lose, what is almost as great a benefit, the clearer perception and livelier impression of truth produced by its collision with error.”

But Mill is not naïve about people’s desire for truth:

“It is a piece of idle sentimentality that truth, merely as truth, has any inherent power denied to error of prevailing against the dungeon and the stake. Men are not more zealous for truth than they often are for error, and a sufficient application of legal or even of social penalties will generally succeed in stopping the propagation of either.”

And he reminds us that truth-seeking comes with no guarantees of success:

“But, indeed, the dictum that truth always triumphs over persecution is one of those pleasant falsehoods which men repeat after one another till they pass into commonplaces, but which all experience refutes. History teems with instances of truth put down by persecution. If not suppressed forever, it may be thrown back for centuries.”

History is certainly teeming, right before our eyes. Like Mill, we can be realistic our truth-seeking and keep seeking, committed to that freedom for our collective effort. Truth matters and freedom of expression to seek the truth matters, even without guarantees.

The Humanities Institute, in partnership with the Austin Public Library, will be hosting a discussion of First Amendment rights in today’s political discourse at our Democracy and Community Action Reading Group on March 28, 2017 at 7pm at the Cepeda Branch of the Austin Public Library. Robert Jensen, Professor in the School of Journalism at the University of Texas at Austin, a founding board member of the Third Coast Activist Resource Center, and a member of the board of Culture Reframed, will be present to discuss his experience working on issues surrounding freedom of the press.

Robert Jensen is the author of Arguing for Our Lives: A User’s Guide to Constructive Dialogue (City Lights, 2013) and We Are All Apocalyptic Now: On the Responsibilities of Teaching, Preaching, Reporting, Writing, and Speaking Out (CreateSpace, 2013). He has written and spoken at length about freedom of the press, the role of journalism in today’s political climate, and the importance of journalism to fostering a democratic society.

2 thoughts on “Is Truth Dead?”