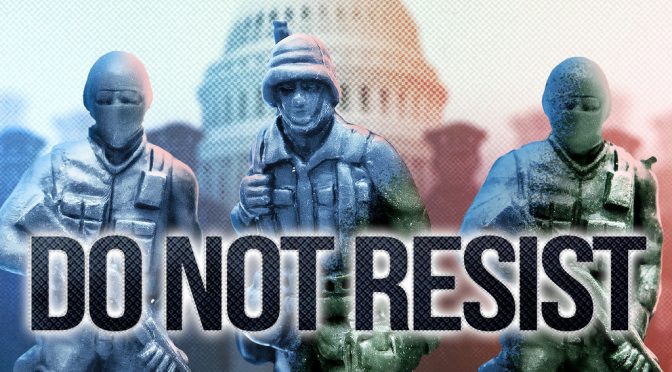 Early on in the community discussion of the Controversy and Conversation screening of Craig Atkinson’s documentary, Do Not Resist, Gabriel Solis, Executive Director of the Texas After Violence Project, asked our group two questions central to the film’s exploration of police violence and militarization and the ongoing national discourse regarding incidents and victims of police violence and the protests they inspire: What is the role of police? What should policing mean? Having watched Atkinson’s stirring footage of the conflict between protestors and heavily armed and armored police during the Ferguson, MO protest of the fatal shooting of Michael Brown, police training exercises and seminars, and SWAT “no-knock” warrant searches, the community members gathered at the Terrazas Branch of the Austin Public Library had just been presented a disturbing albeit limited sense of the role that police actually do play in contemporary American society. While our group did not (and perhaps could not hope to) arrive at a single, clear answer to Mr. Solis’s questions, many participants’ comments indicated that, regardless of what policing should mean, it should not mean what it does in the U.S. today.

Where public discourse regarding policing in the U.S. has recently tended to focus on the injustice of officers’ acts of violence against unarmed people of color and the U.S. justice system’s response (or lack of response) to those officers’ acts of violence, Do Not Resistseeks to shed light on the training, ideology, and equipment that inform and enable police violence. Perhaps the film’s central thrust is its exploration of the growing militarization of U.S. police (which is clearly on display in the footage of the Ferguson protests) through access to military grade equipment including firearms, assault vehicles, and surveillance technology. Atkinson examines the U.S. government’s 1033 program, which allows the Department of Defense to make the unreasonable amount of underused and excess military equipment (including a wide variety of non-combat equipment) being housed in large DoD storage facilities available to local law enforcement. Atkinson shows that equipment made to wage war, such as the MRAP, a large armored vehicle, and M16 assault rifles, has become both more available and, in the eyes of some law enforcement personnel, more necessary than ever to effectively subdue and/or eliminate violent civilians with increasingly lethal weapons.

The importance and escalation of violence in U.S. policing implied by this militarization is verbalized during a law enforcement training seminar led by Dave Grossman, a retired military officer. In demand as a speaker for police departments across the U.S., Grossman tells his audience that law enforcement must fight violence with “Superior violence. Righteous violence…Violence is your tool…You are men and women of violence,” indicating that a capacity for “superior” violence is necessarily a defining quality of U.S. law enforcement. As one community member at the screening pointed out, Grossman goes on to create a narrative for law enforcement officers in which violent action and skilled police work make them the “man of the city,” a contemporary heroic archetype which he nationalistically mythologizes by comparing it to the legendary frontiersman of the American West.

Grossman goes on to affirm the necessity of police violence by stating a truth he is certain his audience already knows: monsters are real and they are an imminent threat to society. Atkinson follows the footage of this discussion of monsters by showing Grossman giving an idealized description of the law enforcer looking out over his city and taking satisfaction in knowing that his actions have improved the lives of others. This description suggests that protecting and serving one’s community remains an essential aspect of Grossman’s conception of policing. However, Grossman’s insistence on the existence of monsters asks law enforcement to see certain humans, certain community members, as terribly inhuman and deserving of superior violence rather than protection and service. This dehumanization of criminals and those suspected of committing a crime makes violent action by police easier to justify and carry out by suggesting that these violent acts do not damage or terminate human lives but subhuman, animalistic lives. Of course, even the most violent of criminals, let alone those wrongfully suspected of committing a crime, are entirely and undeniably human. Therefore, if police officers are to find a sense of purpose or satisfaction in improving others’ lives, then they must also acknowledge that their use of militarized violence is counterproductive to this aim in that it destroys lives and can cause as much or more damage than it prevents.

While much of the discussion following the screening of Do Not Resist focused on what policing should and should not mean and was composed of community member critiques of U.S. law enforcement in a vein similar to the one I have given above, it was concluded by responses to two more questions asked by Mr. Solis: What does justice look like for an officer who kills an unarmed person? What does justice look like for police violence victims’ families? Responses to these questions pondered whether life imprisonment or the death penalty should be considered a just response to the killing of an unarmed citizen by a police officer or to the killing of a police officer by a citizen. Mr. Solis, whose work with Texas After Violence involves regularly interviewing the families and friends of victims of police and criminal violence, sees neither of these responses as just. Having heard many stories of how police and criminal violence has destroyed lives, Mr. Solis saw the death penalty and life imprisonment (at least in the current U.S. prison system) as additional ways of disposing of human lives. He instead advocates for a more recuperative form of justice that holds people accountable without disposing of them. Do Not Resist’s portrayal of U.S. law enforcement suggests that we are far away from having a criminal justice system that does all it can to hold those convicted of crimes accountable while respecting their humanity and providing them with real opportunities to change, grow, and perhaps even become reintegrated into society; that such a reconceptualization of American policing and justice was articulated in our Controversy and Conversation discussion seemed to mark a small step towards its realization.