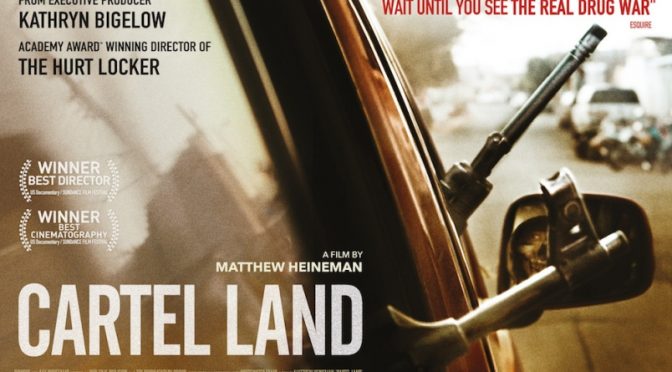 After our November 1st Controversy ad Conversation screening of Matthew Heineman’s Cartel Land, guest speaker Dr. Jake Dizard, Postdoctoral Fellow with the Mexico Security Initiative at UT’s Robert S. Strauss Center for International Security and Law, stated one of his major takeaways from the film: power corrupts and attracts. Dizard made this observation based on Cartel Land’s intimate and, at times, disturbing footage of the rise and fall (if not from power then certainly from grace) of José Manuel Mireles Valverde’s Michoacán-based anti-cartel vigilante group, Autodefensas. That watching Cartel Land, a film about (at least initially) victimized, fearful, and/or exasperated citizens striving to obtain and use whatever power they can to combat the activities of Mexican drug cartels, inspired Dizard to make this observation speaks to the film’s ability to highlight the moral ambiguities and failures of the vigilante enterprises it documents. 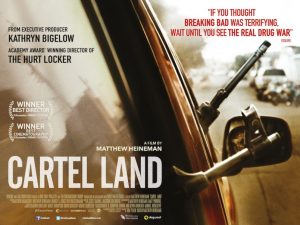 Tim “Nailer” Foley, the leader of Arizona Border Recon, a group of American vigilantes who patrol the U.S.-Mexico border to catch drug traffickers, helps Cartel Land comment on these moral ambiguities and failures by claiming early on in the film that a clear dividing line exists “between…good and evil.” He indicates that he and his group are firmly on the side of good fighting the forces of evil in the form of Mexican drug cartels. As Dizard’s observation suggests, Cartel Land’s documentation of vigilante and drug cartel activity encourages its viewers to question the notion that good and evil are easily identifiable and discrete and to become skeptical of those who pursue or hold power while proclaiming good intentions. 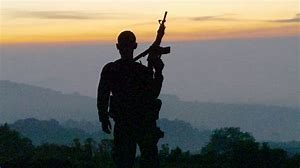 Given that Mireles and other members of Autodefensas ostensibly strive to bring unlawful but moral justice to those law-breakers whom they consider truly immoral, they too would have considered themselves on the side of good. The film’s moving scenes of working class families in Michoacán mourning more than a dozen victims, including women and children, of cartel violence suggest that the members of Autodefensas had good reason to believe they were taking up arms against evil. Cartel Land not only documents the impact of cartel violence on survivors but also shows some grisly images of those victims, images which compelled some audience members to look away and, for those watching, reified the deadly violence carried out to protect or grow cartels’ financial interests. Thus, Cartel Land gives viewers reason to sympathize with, if not outright approve of, the citizens who arm themselves to regain control of and protect their communities. However, as we watch Autodefensas’s ranks swell and their power grow under Mireles’s charismatic leadership, we also see them invade homes to confiscate property, arrest and torture men whose affiliation with cartel activity is uncertain, and hear Mireles tell one of his men to “get everything you can out of [a suspected cartel member], and then put him in the ground.” That these men appear to steal, torture, and kill within the communities their group initially intended to protect eliminates any possibility of easily classifying their organization as morally “good.”

Despite his claim to goodness and his earnest desire to be seen as morally justified, Cartel Land reveals that Nailer’s Arizona Border Recon’s moral status is quite murky as well. Though one might argue that Nailer’s goal of hampering cross-border drug trafficking is morally justifiable, his organization functionally provides its members with an opportunity to arm themselves, hunt, threaten, and detain Mexican citizens who have illegally crossed the border with apparently very little oversight from U.S. Border Patrol. As Dizard pointed out in our discussion, this makes Arizona Border Recon an attractive organization for blatant racists such as one member whose involvement is motivated by the belief that we should not “put two races in the same nation, and expect them to get along.” Though Foley’s motivations have the semblance of moral justification, that moral justification is compromised to increase the organization’s power and resources. 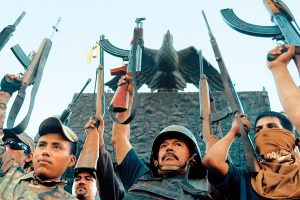 These vigilante organizations’ failure or inability to control membership is perhaps one reason why Dizard’s observation that power corrupts and attracts applies well to them. We find out in the film that Autodefensas compromises its own values by secretly partnering with a drug cartel to obtain weapons and money, becoming blatantly corrupt and quite similar to the criminal organization from which it sought to protect local communities. Autodefensas’ success attracted those who sought to abuse its recently acquired power, and the organization slowly takes on the values and practices of a cartel.

By the film’s end Autodefensas has been made an official police force by the Mexican government even though its criminal tendencies and connections are an open secret, and while this legitimization of a corrupt police force may surprise many American viewers, it did not surprise Dizard. This decision to throw the ineffectual band-aid of legitimacy on a vigilante force too powerful to be stopped without significant military intervention is characteristic of, to use Dizard’s phrase, the Mexican governments’ ineptitude and indecisiveness. Ironically the government’s ineffectual legitimization of Autodefensas reveals part of the reason such a vigilante group was founded: the Mexican government cannot be relied upon to effectively protect or act in the best interest of its citizens. The Mexican government is another ostensibly “good” entity, one meant to ensure the safety of its people, with corrupt elements, and its ineffectuality allowed Autodefensas to obtain power and subsequently become corrupt itself.

The final scene of Cartel Land  (which I opt not to spoil here) left those of us watching in the meeting room of the Terrazas Branch of the Austin Public Library with the impression that the events it documents reveal a cycle of corruption frequently, if not inevitably, driven by individuals’ and organizations’ attempts to obtain political, economic, and social power. It is perhaps through its portrayal of the persistence of this cycle of corruption and violence that the film makes its most persuasive critique of Nailer’s conception of vigilantes as “good” fighting “evil”. That neither of the film’s vigilante groups make any lasting progress in their fight against evil suggests that arming citizens to allow them to pursue potentially swift, indiscriminate (or racially motivated), and violent “justice” is more likely to drive the cycle of corruption and violence forward than break it.