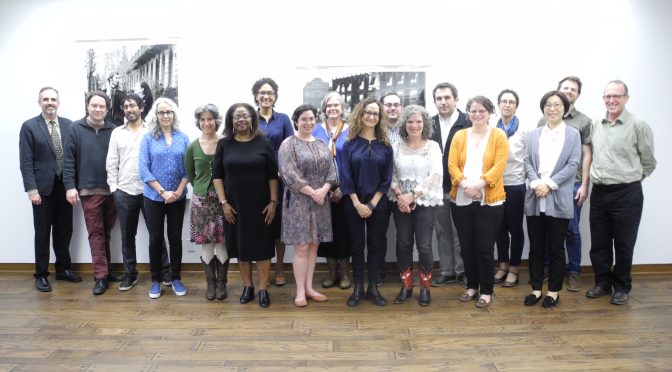 On May 9th, Dr. Carrie Barron, Director of the Creativity for Resilience Program at the Dell Medical School and Assistant Professor in the Department of Psychiatry, led the final spring session of the Humanities Institute’s Faculty Fellows Seminar. Barron engaged the Faculty Fellows in a discussion of the therapeutic value of mental health blogs and the positive impact that studying the humanities may have on medical education and care.

Barron explained to the Faculty Fellows that in trying to decide upon her next intellectual project she realized that of all her previous projects, including several academic articles and her book, The Creativity Cure: How to Build Happiness with Your Own Two Hands, she felt that the 115 blogs she wrote for the popular website Psychology Today are her most valuable work. These blogs, some of which have attracted two to four hundred thousand readers, have allowed Barron to connect with and offer general therapeutic advice to the “layperson in simple language.” Barron noted that readers’ comments and messages have given her hundreds of pieces of evidence that blogs like “I Do Not Like Being A Mother: A Monologue about Parenting” and “If You Are the Target of Narcisisstic Abuse: Ways to think, words to say, and how to move on” have had a significant impact on the lives of people struggling with serious mental health issues. Barron regularly responds to readers’ comments and messages, and she sees these digital interactions as an important and meaningful way for her to use her professional knowledge and skills to support people unsure of how to navigate difficult or unhealthy relationships and thought patterns (she emphasized that this correspondence should be understood as support, not therapy). Barron expressed a desire to better understand the therapeutic impact that her blogs appear to have on readers and asked Faculty Fellows to weigh in on what the mental health blog genre offers readers.

Barron went on to discuss ideas for a possible book project that would explore how engagement with the humanities enhances the ability of medical caregivers to navigate uncertainty and ambiguity. According to Barron, medical students’ intense focus on STEM subjects reduces the flexibility of their thought. In some cases this causes medical caregivers to lean too heavily on providing a swift solution for patients in the form of a diagnosis when they might provide better care by focusing more on listening to patients and seeing ambiguous medical situations as opportunities to learn and respond creatively. Alongside coauthors Dr. David Ring and Dr. LuAnn Wilkerson, Barron suggests in her blog, “Humanities in Medical Education,” that writers like John Keats and F. Scott Fitzgerald have shown us the importance of “honing” our ability to be emotionally intelligent, intuitive, and creative—especially important for medical students and clinicians “when the anatomy is anomalous, when the facts don’t match the textbook,” or when patients’ stories are ambiguous.

Faculty Fellows responded to Barron’s discussion of her blogs by saying that they may work therapeutically because they provide a digital safe space for people experiencing difficult psychological situations to share their experiences and concerns. Fellows also observed that her blogs were valuable because they accomplish something other academic projects seldom do: they translate professional knowledge into a format that appeals to and benefits a broad public audience. Barron and other Fellows indicated that this kind public scholarship appears to be undervalued in academia, where peer-reviewed articles and monographs, publications that tend to have narrow target audiences, are valued significantly more than other kinds of scholarship.

In response to Barron’s ideas about the role of the humanities in medical education Fellows agreed that the humanities’ emphasis on forming connections between and understanding the complications of human lives could enhance caregivers’ comfort with ambiguity and attunement to others. Other Fellows noted that it is important that those interested in medical humanities distinguish between exposure to the arts, which would entail activities like reading poetry or painting, and studying the humanities, which would entail activities like critically analyzing a poem or painting. Fellows suggested that both are valuable and that practicing the critical methodologies used in the humanities would allow medical students to cultivate certain forms of attention that would enrich their interactions with art and other human beings. 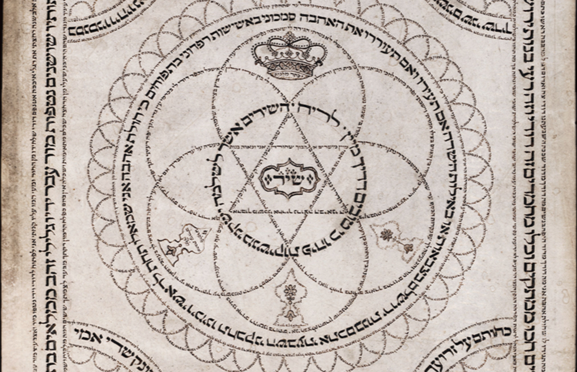 Dr. Jonathan Kaplan, Assistant Professor in the Department of Middle Eastern Studies, led the May 2nd session of the Humanities Institute’s Faculty Fellows Seminar. Kaplan discussed his current book project, The Biblical Jubilee and Ancient Utopian Visions of Liberty, which explores the history of the reception of the biblical jubilee to analyze “the ways in which ancient Jewish and Christian writers employed [it] as a tool in shaping the narratives of their utopian visions.”

The biblical jubilee refers to the description of the sabbatical and jubilee years in Leviticus 25. According to Kaplan, “The jubilee year concludes a forty-nine-year cycle during which, every seven years, the land of Israel is afforded a year of ‘complete rest’ (šabbat šabbātôn; v. 4),” also known as the sabbatical year. Kaplan explained to Faculty Fellows that, according to Leviticus 25, celebrating the jubilee year entails releasing debt slaves and returning property to “familial allotments putatively made during the Israelite settlement of Canaan.” Biblical scholarship on the jubilee has tended to analyze whether the sabbatical and jubilee years were ever actually observed and frequently describes the biblical jubilee as impracticable and utopian, according to Kaplan. Kaplan indicated that biblical scholars’ association of utopianism with impracticability has caused critics to overlook the impact that the “utopian character” of the biblical jubilee has had on “Jewish, Christian, and Western” political and social thought.

Kaplan draws on the utopian theories of Lyman Tower Sargent to claim that the vision of an Israelite society that frees slaves and redistributes land in Leviticus 25 is specifically a “eutopia,” or positive utopia, “because it envisions the enactment of a society in the context of a time and space…that its writer imagines as ideal in comparison to his current situation.” Kaplan highlighted the “generative power” of the biblical jubilee’s eutopian vision by observing that the inscription of Leviticus 25:10 on the Liberty Bell (“Proclaim Liberty throughout all the Land unto all the inhabitants thereof”) “helped motivate” the movement for American independence from Britain, the abolitionist movement, and the women’s suffrage movement.

Kaplan explained to Faculty Fellows that he sees The Biblical Jubilee and Ancient Utopian Visions of Liberty as addressing the surprisingly underexplored relationship between biblical studies and utopian studies. He suggested that engaging with utopian studies provided him with critical tools to analyze the implications of the idealistic and aspirational qualities of the biblical jubilee. For example, theories of utopia enabled him to consider how Leviticus 25’s assertion that Yhwh is the divine owner of the land of Canaan suggests the aspiration for an ideal social structure with “Yhwh’s kingship as its organizing principle.” He noted that examining how this ancient Israelite aspirational narrative influences the thinking of people centuries later reveals how the imagined ideal societies of those who came before us may shape our own visions of an ideal society and inspire us to work towards its realization.

Faculty Fellows mentioned that aspects of the biblical jubilee appeared to ensure that wealth would remain in the possession of a privileged segment of the Israelite population and wondered whether such a social structure truly constituted a eutopia. Kaplan indicated that an imagined society’s eutopian status depends on whether the imagined society represents the social ideals of those who imagine or interpret it. Other Fellows made comparisons between the notions of land ownership in Leviticus 25’s divinely-organized eutopia and those in Karl Marx’s socialist eutopia. Further, Kaplan’s discussion of the receptions and influence of the biblical jubilee in different historical moments prompted Faculty Fellows to consider the extent to which different cultures, faith traditions, and fields of study view the path to an ideal society as one that returns to a past way of life, leads to an entirely new way of life, or creatively combines the old and the new.