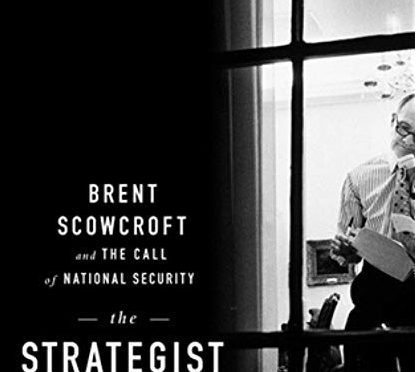 Much like the previous week, seminar leader Bartholomew Sparrow began the Faculty Fellows seminar September 5th with a question: what qualities of biography make it most amenable to or consistent with science (specifically social science), and how can biography fit within academic research? Dr. Sparrow, Professor in the Department of Government, discussed the ways in which academic disciplines can determine narrative methodologies in relation to The Strategist: Brent Scowcroft and the Call of National Security, his 2015 biography of the former National Security Advisor of the U.S.

In his 2016 article published in Perspectives on Politics, “Why Would a Political Scientist Write a Biography?” Sparrow interrogated his own desire to write life stories. He in turn invited the seminar to discuss the merits and drawbacks of biography as a form of scholarship. Participants in the seminar pondered the methods that their own disciplines use to posit theories or hypotheses, uncover previously unknown facts, and discuss new approaches to problems. Many noted that the Fellows were discussing different ways of approaching truth, or approaching knowledge as a whole. One participant noted that disciplinarity was similar to upholstery–depending on your discipline, a scholar might be more inclined towards making their reader comfortable and their prose more accessible, but (despite some views to the contrary) “upholstering” one’s facts with more accessible language does not necessarily remove its structural integrity as a piece of scholarship.

The seminar’s conversation turned to academia’s frequent struggles to position researchers in relation to their audience, and to their subject matter. There might be a desire to view certain disciplines as more objective, but as participants noted, acknowledging one’s own position as interpreter, observer, and/or researcher does not necessarily make a work less truthful, or less valuable. Biographies, as some participants noted, are not infrequently sold for either entertainment or for a more political agenda, making their status occasionally uncertain within the academy. However, others noted that elements of biography appear in a variety of fields, from anthropology to psychology, and that certain works of biography occupy areas of heady scholarship. Biography can serve as a potential case study, some suggested, or narration of biographical subjects’ individual agency in the historical periods in which they exist. Humanities might provide a “softer chair,” offering material that general audiences find easier to digest, but using a humanities methodology such as biography can yield potentially significant results.

Sparrow noted his own struggles with such questions, particularly with respect to writing about one specific person whose historical period is only a few decades in the past. His biography owed much to his political science background and grounding scholarship, but it additionally owed thanks to the Scowcroft family, Scowcroft’s colleagues, and Scowcroft himself, all of whom provided interviews. Working with a subject who primarily operated behind the scenes could prove difficult for Sparrow’s research, and his work was further complicated by being first–Scowcroft had not yet had a biography written about him, making Sparrow’s task both more flexible and more linear, or prosaic.

Participants praised Sparrow’s writing style, noting how approachable the chapters they read from the biography are. Many also noted the structures that emerged from Scowcroft’s story, highlighting Sparrow’s work to both uncover the person and the larger system and bureaucracy in which he participated. As seminar participants discussed, biography operates as a means of individualizing history, preserving subjects’ agency while also uncovering facts about the systems in which they participate, or in which they find themselves caught.

Biography might have the added possibility of describing the ways individuals move or are moved through their historical period, providing readers the experience of what a historical period might feel like, rather than what it has wrought. Biography–and narratives in general–might be chronicles of these waves of agency and passivity within an individual life, mirroring, perhaps, the scholar’s own impulse to write. The seminar concluded with the firm affirmation that participants were eager to read more of Sparrow’s biography to find out just what happened next.

The Fall 2019 Faculty Fellows Seminar began on August 29th with a session led by Dr. Deborah Beck, Associate Professor in the Department of Classics. Dr. Beck shared her unpublished interdisciplinary project on epic simile, entitled The Stories of Similes in Greek and Roman Epic. The book aims to engage with epic simile as a linguistic comparison between two narratives given equal weight–the mythological story (or plot) and the simile. Dr. Beck’s book will also emphasize the importance of simile in five ancient epics, including Homer’s Iliad and Apollonius’s Argonautica.

Similes proliferate throughout common speech, containing complex thoughts and concepts in everything from day-to-day conversation to novels and stories. Rather than ornamental, similes fulfill a specific narrative function for epic poems, creating complex webs of relationships between similes across the work. Extended similes–or similes that span more than the simple standard of “x is like y”– in epic poetry in particular cover repeat topics, for instance using a span of several similes to vividly portray a shepherd and his flock. Beck noted that she herself was engaged in a kind of simile or at least complex comparison in her own project, comparing the story outlined in these similes to the mythological story as mutually constitutive. Essential to Beck’s own complex interweaving is the project’s digital component, a database that catalogued the 486 extended similes that appear in these epic poems. This database will stand as its own scholarly resource after the book’s publication.

Both in her assigned blog post, “On Reading (And Writing) for Pleasure” and in the seminar, Beck advocated for an approach to narrative that would “create conversations about specialized ideas in which both the learned and the not-as-learned can participate with enjoyment.” She aimed to begin her seminar with similar considerations, questioning seminar participants’ own use of narrative and storytelling, and questioning the ways in which they found their own discipline intersecting with Beck’s readings for the week. Before the seminar began to unpack the details of Beck’s work, Beck provided participants the opportunity to reflect on the assigned readings with a short freewriting icebreaker, asking the seminar to consider the connections to their own discipline and anything  they found surprising about what they had read. This beginning exercise opened several lines of conversation between participants, including the benefits and/or drawbacks of viewing The Iliad as solely an oral text versus a written text, and the kinds of listening/reading engagement that epic poetry encourages by including extended similes. Some participants declared that the similes made the poems much more porous than they otherwise would have been, providing multiple ways of engaging with the work, while others noted that rather than consistent active engagement, the similes allowed a looser reading or listening style, allowing readers to focus on the similes they most preferred.

Some seminar participants responded to  Beck’s emphasis on distinguishing  narrative from story. Beck affirmed that her formulation of narrative had more to do with the story that arises from both the similes and the mythological story (plot). In other words, “story” refers to the events being narrated, while “narrative” also includes the way those events are presented to the audience, including the use of abundant interrelated similes in the case of The Iliad.  Pursuant to this, participants noted that what struck them about the selections of The Illiad they had been tasked to read was the humanist message that arose from the interplay of simile and story. Similes have a visual, and indeed almost performative quality that forces the reader to consider themselves in relation to the text, interpolating their own viewpoint and experience. Additionally, many noted that the project’s digital database lent itself to a  non-linear approach to narrative.

The conversation turned to the kinds of narratives participants frequently draw on in their own disciplines and in their own writing. Beck and seminar participants pondered the ways in which storytelling, simile, metaphor, and language as a whole structures their own work, including how accessible to non-specialists their work is or isn’t. Beck herself noted in college, she only fell in love with The Iliad after she read Book 24 in Greek and found herself deeply affected by the power of Priam’s plea to Achilles for his son’s body. Similarly, seminar participants noted, the power of storytelling lies in its ability to promote empathy for more than one side of a conflict. Storytelling can create unexpected inroads for readers across disciplines–a feature session leaders may yet explore over the course of the fall seminar.