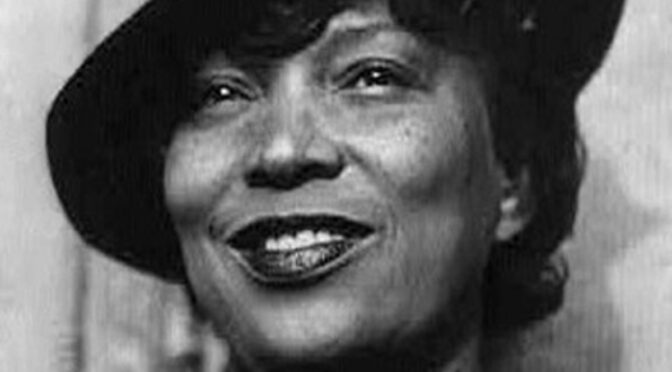 My Most Humiliating Jim Crow Experience
by Zora Neale Hurston

My most humiliating Jim Crow experience came in New York instead of the South as one would have expected. It was in 1931 when Mrs. R Osgood Mason was financing my researches in anthropology. I returned to New York from the Bahama Islands ill with some disturbances of the digestive tract.

Godmother (Mrs. Mason liked for me to call her Godmother) became concerned about my condition and suggested a certain white specialist at her expense. His office was in Brooklyn.

Mr. Paul Chapin called up and made the appointment for me. The doctor told the wealthy and prominent Paul Chapin that 1 would get the best of care.

So two days later I journeyed to Brooklyn to submit myself to the care of the great specialist.

His reception room was more than swanky, with a magnificent hammered copper door and other decor on the same plane as the door.

But his receptionist was obviously embarrassed when I showed up. I mentioned the appointment and got inside the door. She went into the private office and stayed a few minutes, then the doctor appeared in the door all in white, looking very important, and also very unhappy from behind his round stomach.

He did not approach me at all, but told one of his nurses to take me into a private examination room.

The room was private all right, but I would not rate it highly as an examination room. Under any other circumstances, I would have sworn it was a closet where the soiled towels and uniforms were tossed until called for by the laundry. But I will say this for it, there was a chair in there wedged in between the wall and the pile of soiled linen.

The nurse took me in there, closed the door quickly md disappeared. The doctor came in immediately and began in a desultory manner to ask me about symptoms. It was evident he meant to get me off the premises as quickly as possible.

Being the sort of objective person I am, I did not get up and sweep out angrily as I was first disposed to do. I stayed to see just what would happen, and further to torture him more. He went through some motions, stuck a tube down my throat to extract some bile from my gall bladder, wrote a prescription and asked for twenty dollars as a fee.

I got up, set my hat at a reckless angle and walked out, telling him I would send him a check, which I never did. I went away feeling the pathos of Anglo-Saxon civilization.

And I still mean pathos, for I know that anything with such a false foundation cannot last. Whom the gods would destroy they first make mad.