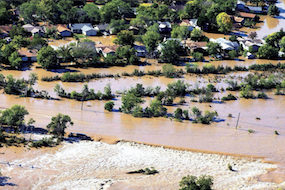 Dr. Lieberknecht’s presentation focused on the importance of including local knowledge in climate planning. She heads a National Science Foundation-supported collaborative project located in Dove Springs that seeks to find ways to integrate community knowledge into city efforts to contain flooding and ameliorate extreme heat. Lieberknecht identified three kinds of infrastructure planners consider when designing solutions: the built environment; the ecological environment; and the social environment. Using seasonal flooding as an example, the built environment includes structures such as levees; the ecological environment includes efforts to create green space; and the social environment includes communication networks within communities. Local knowledge incorporates information about all three. Community members know which storm drain always backs up, which route to the grocery store is shadiest in the heat of summer, and who organizes community responses. The Dove Springs project is still in its beginning stages—the research began roughly 6 months ago, and some aspects have been hampered by C19 restrictions—but Lieberknecht and her academic and community partners hope that its findings will help planners and communities design more robust climate solutions.

Dr. Hodges followed. He opened his presentation by sharing a simple fact: global warming means increasing rain, increasing rain means more floods. Floods happen for three reasons, Hodges explained. Rivers exceed their banks; storm surges overwhelm coastal areas; and “water bombs,” localized intense rainstorms. Cities are not currently designed to manage such storms. Design criteria must change. But civil engineering solutions operate almost exclusively from a cost benefit analysis.  Wealthy people live on the most valuable land, so it’s that land that civil engineers strive to protect. Hodges pinpointed a dilemma in infrastructure planning: when changes are made to mitigate undesirable circumstances, such as flooding, property values rise. Gentrification often follows, driving the original residents out. How can engineers and city planners create solutions that preserve communities instead of displacing them? Hodges suggested a few ways to change current practices. Firstly, he encouraged more interdisciplinary work to provide more holistic understandings of the problems and possible solutions. He promoted investment in ripping out concrete and asphalt to create new green spaces, and stressed the importance of building codes in addressing infrastructure inequities. He also proposed that cities begin thinking of eminent domain as a tool to bring more valuable properties into green space.

To close the panel, Dr. Gore brought a more direct focus on health outcomes. Since the “chemical revolution” of the World War II period, synthetic chemical production has increased dramatically. Many of these chemicals allow us to have products that make our lives easier or more convenient. However, their production often causes pollution that harms both human and non-human life. Gore described her research on endocrine-disrupting chemicals, or EDCs, which she defined as “a chemical that interferes with any aspect of hormone action.” Hormones, she explained, affect brain development and behavior regulation, among other factors. She emphasized two points: EDCs have adverse effects on brain health, and these adverse effects can affect the health of future generations. We’re all exposed to EDCs, primarily through food. Chemical contamination harms wildlife as well as human life, which Rachel Carson demonstrated in her 1962 book, Silent Spring. As the planet warms up, the polar ice caps melt, and chemicals once trapped in the ice are released into the air and water. While it would be impossible to avoid all exposure to EDCs, Gore offered some actions we all can take in order to minimize risk. She advised microwaving in glass containers rather than plastic; drinking filtered water, not bottled water; and eating fresh produce—organic, if it’s affordable—instead of industrially processed food.

A lively discussion followed. Participants discussed the tension between local and national needs when addressing infrastructure issues, and the need for context-informed solutions. Lieberknecht cited the need to “think with equity.” Solving these issues requires thinking holistically, including conversations about living wages, affordable housing, and access to healthy food. While all agreed that community cultures of care are important, they stressed that it’s the role of municipalities to step up and address problems.

Several resources were shared by the panelists and participants in the chat. Some are linked below.

“Policy Decisions on Endocrine Disruptors Should Be Based on Science Across Disciplines: A Response to Dietrich et al.” Andrea Gore, et al.

The Death and Life of Great American Cities Jane Jacobs

The Economy of Cities Jane Jacobs

Palaces for the People: How Social Infrastructure Can Help Fight Inequality, Polarization, and the Decline of Civic Life  Eric Klinenberg

Thinking in Systems and other work by Donella Meadows

Water 4.0: The Past, Present, and Future of the World’s Most Vital Resource David Sedlak

Scale: The Universal Laws of Life, Growth, and Death in Organisms, Cities, and Companies Geoffrey West

Photo of the 2015 Halloween flood in Austin, TX courtesy of the City of Austin

One thought on “Difficult Dialogues Spring Public Forum: Health, Infrastructure, and the Environment”